Zen and the blank, sympathetic page. 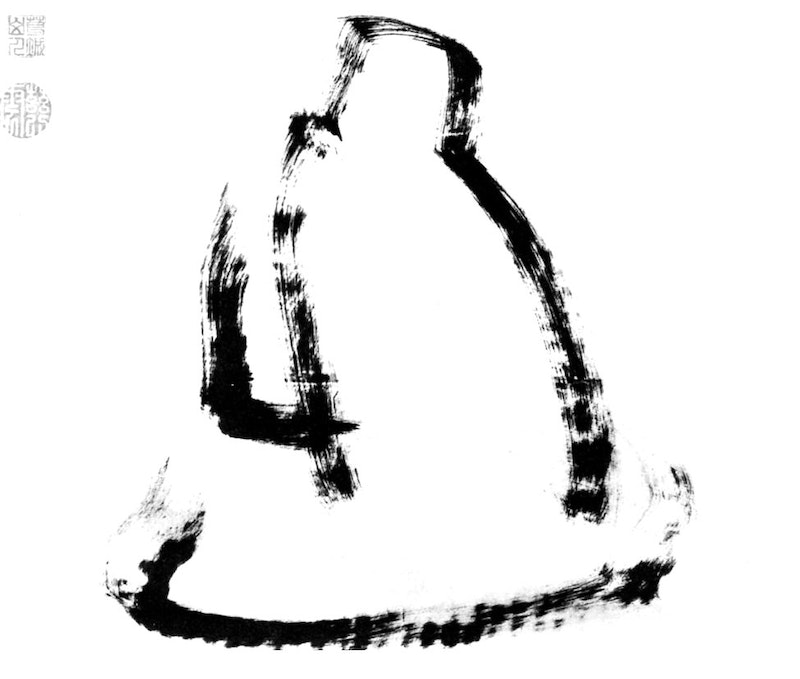 The above is a detail from the ink painting by Jiun Onko, an 18th century calligrapher, artist, and Buddhist priest who studied Zen philosophy and art even though he did not practice Zen himself (full version below). The painting is sometimes titled Seated Bodhidharma and sometimes The Place Without Merit. The calligraphy, according to Sylvan Barnet and William Burto in their work Zen Ink Paintings, reads “not know.”  This refers to a legendary exchange between the Bodhidharma, the founder of Zen, and a Chinese emperor. Here’s the dialogue as reproduced by Barnet and Burto in their book:

The emperor said: “What then is true merit?”

He answered: “It is pure knowing, wonderful and perfect. Its essence is emptiness. One cannot gain such merit by worldly means.”

Thereupon the emperor asked: “What is the sacred truth’s first principle?”

The emperor said: “Who is it that now stands before me.”

The master replied: “I don’t know.”

Barnet and Burto add that “Zen emphasizes non-duality, depersonalization; and depersonalization could scarcely go further than Jiun’s representation of Bodhidharma.” The Zen truth of vast emptiness is not so much illustrated as demonstrated by Jiun, who draws the Bodhidharma as a bare brush outline, with the ink lines themselves split and rough, letting blank white show through. In the same way, the calligraphy above the figure looks rushed and ragged, as if the message “not know” itself hovers on the edge of not knowing, ready to fade back into the silence from which it was hastily and temporarily torn.

There is a contradiction here, though. It is not really true that “depersonalization could scarcely go further than Jiun’s representation.” After all, the drawing doesn’t need to be there at all. The calligraphy without the outline would certainly be less personal. And, for that matter, a blank page would be less personal still. If the message is nothing, why create something? And more, if the idea is to enlighten the viewer, to make him or her understand that nobody is standing there, then why enlist the viewer’s aid so directly in creating some body?

As it is, the painting seems to be a deliberate effort to unenlighten. A viewer can’t help but turn the Bhodhidharma from nothing—abstract lines on paper— into something; the Bhodhidharma, who is not there and then, despite his own parable, is. When the emperor asks, “Who stands before me?” the response “I don’t know” is not a statement of ignorance, but the declaration of a name. Similarly, the calligraphic message here twists back on itself. You cannot read, “not know” without knowing; the words inevitably convey the message that the wrong message has been conveyed. And even the broken strokes; do they really suggest a presence that is more ghostly than real? On the contrary, the gaps in the line serve instead to emphasize the hand of the artist; looking at this image, Jiun’s brush seems like the stiffest, most solid thing in the universe—more solid by far than the centuries he’s dragged it across. More solid, too, than the person looking at the image, who, along with the emperor, is less an individual than a dumb, appreciative foil—a blank, sympathetic page upon which the seer inscribes his own outline.

This is the context in which Slavoj Zizek argues that Zen’s denial of self is essentially a decision to forego ethical choices. In For They Know Not What They Do he says:

… if external reality is ultimately just an ephemeral appearance, then even the most horrifying crimes eventually do not matter. This is the crux of the doctrine of non-involvement, of disinterested action: act as if it doesn’t matter, as if you are not the agent, but things, including your own acts, just happen in an impersonal way.

Zizek goes on to argue that the position of non-involvement could be used to justify the most horrific crimes. If neither killer nor killed exists, then how can the transgression be real? Or, as Zizek asks, “What if—horrible thought!—the Zen meditation technique is ultimately just that: a spiritual technique, an ethically neutral instrument which can be put to different sociopolitical uses, from the most peaceful ones to the most destructive?”

From this perspective, perhaps it is not the seer who draws the outline upon the emperor, but the emperor who fills the space inside the seer. When the emperor asks, “Who is it that now stands before me,” the Bhodhidharma’s response can be seen, not as spiritual truth, but as capitulation. To answer the state by forswearing your own identity is to offer that identity to the state. “I don’t know” means “I am who you want me to be.” If the essence of merit is emptiness, then the only moral choice is obedience.

In Jiun’s drawing, then, the outline is not inscribed upon, but rather by, the viewer.  The statement, “not know,” is a kind of request. Knowledge, form, and self come from those who look at the image; it is they who must, from the white page, dictatorially reconstitute the Bodhidharma and, by analogy, Jiun. Art becomes an offense against vast emptiness; a craven effort to let another create you. Instead of nothing sacred, art is the nothing that is intransigently sacred. The thing you know, in looking at this image, is what is not—and that knowledge is a blemish on the blank face of emptiness. The Bhodhidharma, and Jiun after him, point you back to nothing, but the pointing can only be done with the emperor’s knife, which draws a ragged line between “I don’t know” and silence. That line is the drawing itself. It is a mark like a scar.