It's a Tuesday morning in December in Albuquerque, New Mexico. 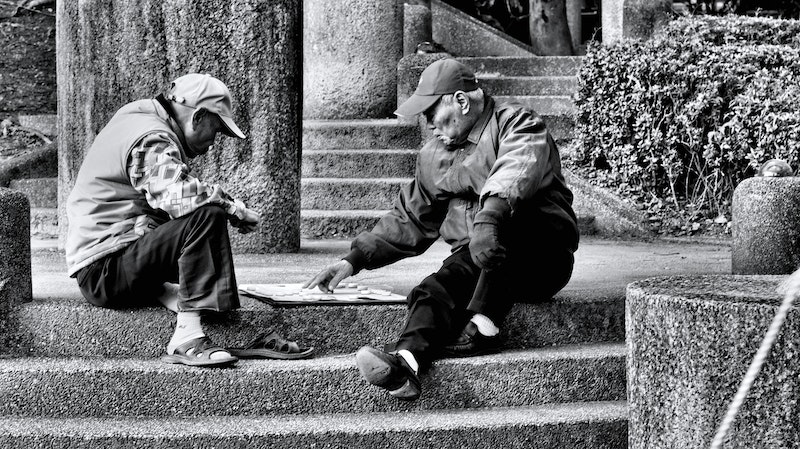 Two middle-aged men, approaching 50, converge upon each other at an agreed upon out-of-the-way cafe. They hug in the way that men who know they need a hug sometimes hug, then look at each other's faces for a moment. Then they sit down on metal chairs. One orders a coffee. The other a green tea with honey. The sidewalk patio table is rickety. It's a Tuesday morning in December in Albuquerque, New Mexico.

"Are you writing these days?"

The semi-prolific poet who rarely submits his writing to literary journals but 20 years earlier had been praised as a "brave new voice" and who now occasionally self-publishes... he's the one asking his friend.

"Maybe once a week," the friend replies. Thirteen years earlier, the friend had written a debut novel that was reviewed in a few prominent places, but couldn't follow it up.

"Perhaps in 10 years I'll find it again. Just before I have my fatal heart attack. That freedom to write whatever floats across my imagination."

Both men married in their early-30s. The friend's wife had a nervous breakdown about 10 years later. The friend was still attempting to put the pieces together, now three years after the nervous breakdown. He was still married, but his wife was on several medications and was nothing like the woman he’d married.

Neither was the friend. He’d been stifled by a brutal work environment at a non-profit dedicated to climate research. He was told to perform contradictory tasks and rarely given any acknowledgment or praise. The friend had taken to online poker and reluctantly visiting massage parlors, always searching for some sort of happy ending.

The poet nods to his friend. "Sometimes it’s hard to find anything there." He sips the coffee. A young couple walk by. They're laughing and then looking at their phones.

The poet asks, "What about the story you started long ago about the Peace Corps volunteer in Central America?"

The friend replies, "What about it? I can't go back to that right now. Too intense. I need to write about characters who are absurd or make bizarre choices, not paragons of virtue."

As they talk, two bowls of soup arrive at the rickety table. The gruff waiter, with thick shoulders and a silvery beard, places the bowls carefully on the troublesome table. The poet asks, "Can we get something to fix this table? It’s uneven. The soup could spill everywhere."

"Broken table," the waiter grumbles and stomps off.

The friend searches in his bag for some cardboard to slide under the table. He finds a package and rips off a piece. The poet gingerly picks up the bowls of tortilla soup. The friend bends down with a groan and slides the cardboard under one leg of the table. Then he gets up and tests the table. A little better, but still uneven.

"It was a solid attempt," the poet manages, delicately placing the bowls back on the table.

The two men began spooning the soup around and taste it. They eat as a few strangers pass by on the sidewalk.

Then the friend gets a text message. "What the...? They want me to come in and talk to the boss tomorrow morning. I took this week off. First week off in six months. Now they're calling me in?"

"Do they know you're here?" the poet asks.

"I don't know. Nobody asked about my vacation." The friend replies.

"Tell them you're on a beach in Mexico," says the poet.

"You know I hate lying," grumbles the friend.

"Maybe just this once. So you can have a week to yourself?" the poet mentions.

"I should spend this week looking for a new job," says the friend.

"Or stay on the beach in Belize," says the poet, who wishes he could leave for Quintana Roo or Belize, but in reality is about to start his shift as a cafeteria manager in an hour.

"Monotony. Middle-age. And then the double whammy of Trump and the pandemic. That and the fact that we have no spiritual center to rely on. Or, we struggle with finding hope, or hope becomes harder to find as we get closer to 50." The poet had many reasons.

"The breakdown broke me down, too. Sometimes I take one of her pills. Just fogs me up for the afternoon. I think she's just choosing the fog at this point." The friend felt paralyzed but still felt love for his wife.

"Have you tried counseling again?" The poet asks the friend.

"Nope. We probably should. So much money, though," the friend replies.

"Or that beach in Belize." Says the poet. "Maybe we should both go for a long weekend."

The friend accidentally knocks his elbow on the edge of the table and the soup bowls both slide off, crashing onto the floor and breaking. A river of tortilla soup makes its way toward the gutter. The poet starts losing it. Pointing at the soup river and shaking his head. The friend starts laughing loudly. They start cackling with the absurdity of the moment. They each slap some money on the table and they walk off together into the late-morning sunshine.