All the News That’s Fit to Print

Microfiction dispatches from the front lines. 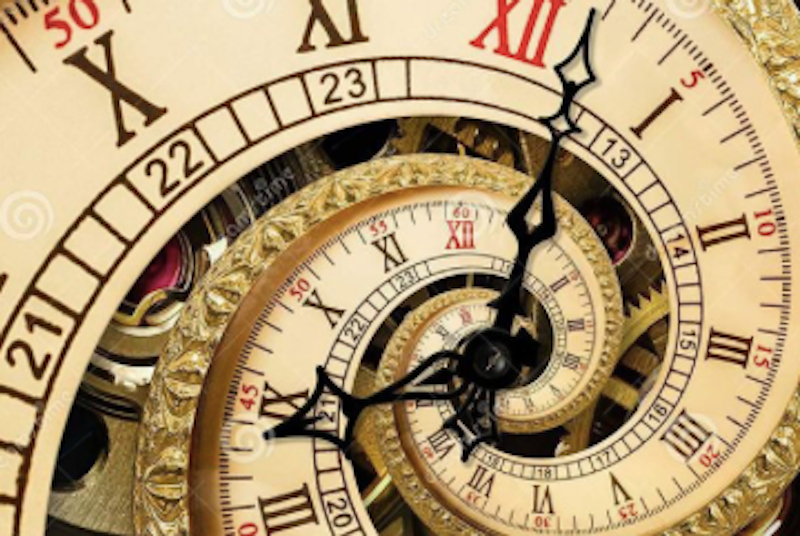 "It was a good town. We made clocks. Grandfather clocks, wall clocks, sundials, hourglasses, you name it. 'The works,' kids used to say. 'Come to clocktown and get the works.' 'The works' meant buying a lot of clocks. Yessir, we used to know what time it was. Time to make and sell clocks.”

Camden Camden, who was doing something on her phone—posting, probably—sighed in acknowledgment of whatever Danny was talking about. When would this tubby windbag of a cubicle mate ever shut up? “I thought Time Man was your thing,” she said. “You know, going to the comic cons and whatnot.”

“The cons?” Cater spat—and I meanreallyspat, because he couldn’t control his bodily processes all that well, what with being a pampered manchild and all—in disdain. “No, I don’t do those anymore. There was a little something called the pandemic, Cammy. It changed everything, including the cons. Remember that? That’s when I started sheltering at home.”

Camden vaguely recalled the pandemic, which had played out in her life as a series of video meetings, delivery dinners, and social media posts. “Oh yeah, that’s right. So what have you been doing these days, Danny?”

Danny cupped his little ferret-fingered hands and began to titter. This was his shining moment, his chance to blow the ever-aloof Camden Camden’s normie pea brain and win her heart forever. “Well, Cammy, if you must know…”

Cater ignored her interruption and resumed talking. “No, if you really must know, I’ve been putting together a comprehensive spreadsheet. But it’s not really a spreadsheet, Cammy. It’s much more than that. It’s the defining human rights project of our time.”

“Sounds cool,” said Camden, briefly glancing up from her phone.

“It is very cool,” Cater assured her. “I’m assigning a race to every fictional non-human cartoon character since Steamboat Willie. And when there isn’t an obvious gender, I’m assigning that, too. After I’m done, I can begin petitioning the major studios to start re-dubbing each character’s dialogue with the appropriate voice actor.”

“Non-humans,” Camden said, but her response didn’t sound like a question so much as someone repeating words from a conversation barely holding their attention.

“Yes, non-humans. Like the Gargoyles from that cartoon Gargoylesor the Teenage Mutant Ninja Turtles or Sonic the Hedgehog. It almost goes without saying that they’re all Black folks,” he explained, his demeanor now that of a serious academic giving a lecture or a public health expert addressing reporters at a pandemic-related press conference.

“Gargoyles are Black? How did you decide that? I thought they were decorations on Gothic cathedrals in Europe,” said Camden.

“Of course they’re Black. It’s… well… it’s extremely very obvious,” said Cater, who, like Camden Camden, was White as a sheet. “And Pipsqueak Piranha, what gender are they?”

“I think that was a baby fish who wore a soiled diaper, if I recall correctly, but I barely remember the show. It was on TV years ago, back when we were kids.”

Camden continued tapping away at her phone. “I don’t want to date you, Danny,” she said politely but sternly, as if mentally preparing to register the date and time of her remark on a deposition transcript. “Please stop asking. That’s the eighth time this year.”

“Anyway”—and here Cater stretched the word “anyway” into something like “annnnnnnnnnnnnnnyyyyyyyywaaaaaaaaaaayyyy,” because this was a catchphrase bit he had been working on—“Pipsqueak Piranha, being of South American descent, is a classic Mesoamerican Two-Spirit.”

“Based on what? That fish is a baby and can’t even talk,” Camden said.

Camden angled her phone to take a surreptitious selfie, then thought better of it. “Yeah, I remember… the Chief found all those pictures on the company laptop.”

“Those were CGI, Cam. It was all perfectly normal and clean. Computer-generated imagery, I mean. That’s 100 percent legal in all jurisdictions. And besides, I paid the artist for those requests, which is the equivalent of getting consent. These were detailed sketch requests, and I paid with my credit card for them at the last pre-pandemic comic con I attended. Listen, I’m feeling a bit triggered and vulnerable right now,” Cater said, drawing his skinny arms around his pear-shaped torso and giving himself a well-needed hug.

There’s nothing more “based,” if that’s even the right word, than drinking out of a big old mason jar filled with a slurry or paste made from grass-feed beef, grass-feed butter, raw free-range eggs, and raw milk drawn by the calloused hands of a milkmaid from the udders of Guernsey cows. This is what it’s all about. Never touching receipts, not getting anywhere near sunscreen, soap, seed oils, seat belts, seafood, and smartphones. You’re getting close, *thisclose*, to tapping the source. You’re almost there. I’m offering you a one-way ticket to health. But it’s more than health. The high-IQ Nordic races ate this way for millennia, and this diet, like their unwavering belief in a flat earth and round, edible sun, meant the world to them. Everything hinged on their living like this. Many of them also hung small weights off their testicles, for various reasons, but they never used these weights for foreskin stretching. Never ever. That’s a lie perpetuated by another Patreon-based guru who isn’t as based as me. If you read the original blackletter text, as I have, you’d know the Nordics favored short, tight foreskins that barely covered the head of the penis, similar to those football jerseys from the 1980s that went over the enormous shoulder pads only to end way above the navel. I’m on a bit of a rant here, but what I’m saying is you don’t need to go elsewhere for the hottest tea because I have all the answers. Every single one of them. That’s why they call me the Answer Man, wanted for the victimless crime of telling the truth across all 50 states and throughout much of continental Europe.