Removing the cobwebs from a day 30 years gone. 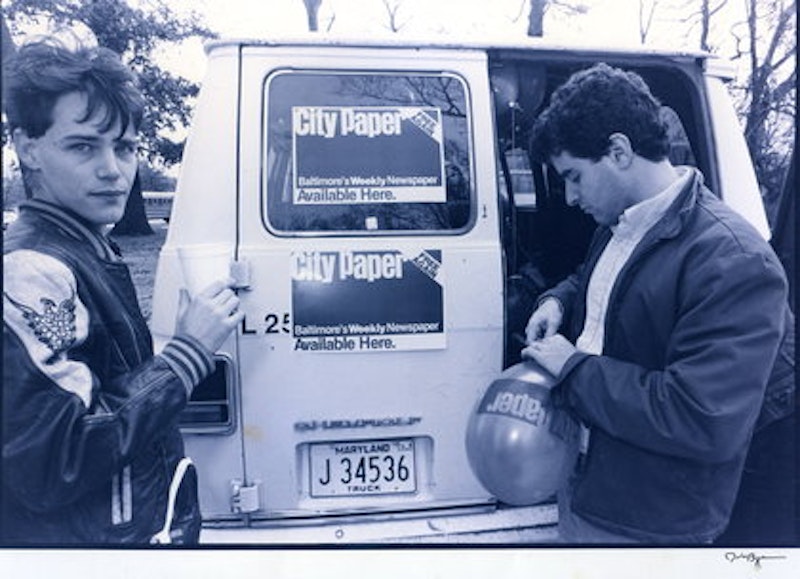 It wasn’t a lazy morning, that Saturday prior to Thanksgiving back in 1982. Baltimore’s not known for elaborate parades, but on this occasion several friends and I were preparing for a kind of a make-shift caravan of floats that would travel part of N. Charles St. in front of a decent-sized crowd of revelers and retailers. And, frankly, the beat-up van that Phyllis, Michael, Alan, Jennifer and I dressed with City Paper posters was perhaps—no, make that definitely—the rattiest of the 50 or so vehicles. Not that we cared—with a cooler full of Pabst and an exuberance that bordered on nutty euphoria, I’m sure we had the most fun.

And why not? The country’s Nixon/Ford/Carter-induced recession was finally starting to ease, and City Paper, the free weekly that Alan and I published—beginning in 1977—was starting to emerge from the start-up doldrums (and debt) that’s so common with enterprises that are conceived by a dream rather than an 18-month round of detailed spreadsheets, focus group circle jerks and a robust bank account. A year earlier, after we’d launched a sister paper in Washington, D.C., also called City Paper—again, more on youthful journalistic enthusiasm than sound business principles—a sheriff had come knocking at our offices at 2612 N. Charles St., threatening to do a repo job on our mammoth typesetting machine, and it took some fast talking and very serious schmoozing to kick that wolf out the door.

Turned out that our company was thousands upon thousands in arrears to the IRS for failure to pay taxes—40 percent of which consisted of penalties; very IRS, they never contact you until the interest charges start racking up—and we’d soon begin a payment program, closely supervised by an agent who’d show up every week (and later, upon leaving his government post, and setting up his own shop, become one of the paper’s small advertisers). Mind you, this wasn’t fraud on our part: we just had no experience in finance, and the ramifications of running afoul of the Feds. It was, as is said too often these days, a “teachable moment.”

Yet, as I noted above, at the end of 1982, our prospects had brightened, our books in order, and if the company wasn’t quite yet making money, we could see the possibility of perhaps turning a profit at some point. So, the bunch of us prepared the van, drove up a side street to arrive at the starting point, and away we went, down N. Charles St., hanging out the windows, and waving at the people lined up in the streets, some of them actual fans of the paper. Oh, our glamorous touch—in comparison to established entities that were giving away treats for the kiddies and had festooned the tops of their smart vehicles with giant helium-powered cartoon characters—was giving out City Paper balloons to those who approached our van. I don’t know that the entire parade was more than two hours, but as we passed below the Washington Monument, into the heart of City Paper-ville in lower Mt. Vernon, and received our most raucous reception, well, that was splendid, a minute or two that seems, in retrospect like an eternity of absolute, child-like fun.

The word “buzz,” in 1982, wasn’t yet rendered meaningless by cliché-driven journalists, and the buzzy feeling all of us had on that day can’t be replicated. And then the following Monday we went back to work, producing two weeklies, pasting down galleys of cold type onto boards, typing and re-typing stories to be passed onto an editor, the impending conversion to a computer on every desk not even in the imagination of our most visionary staff members. In 1983, Reagan’s Morning in America was very real, and “alternative” weeklies across the country began to flourish and by the end of that decade make serious money. A far cry from the paper’s earlier days when every other week, on payday, employees would run to the bank and hope their checks could get cashed. It was a different media environment, not nearly as topsy-turvy as today’s, and while you can’t and wouldn’t want to, turn the clock back, the holiday season conjures up waves of nostalgia. A lot of gauzy revisionism too, but what the hell, that’s not the worst misdemeanor a person can be accused of.