Your choice of TV shows, sushi, pie, and reuniting with 1987 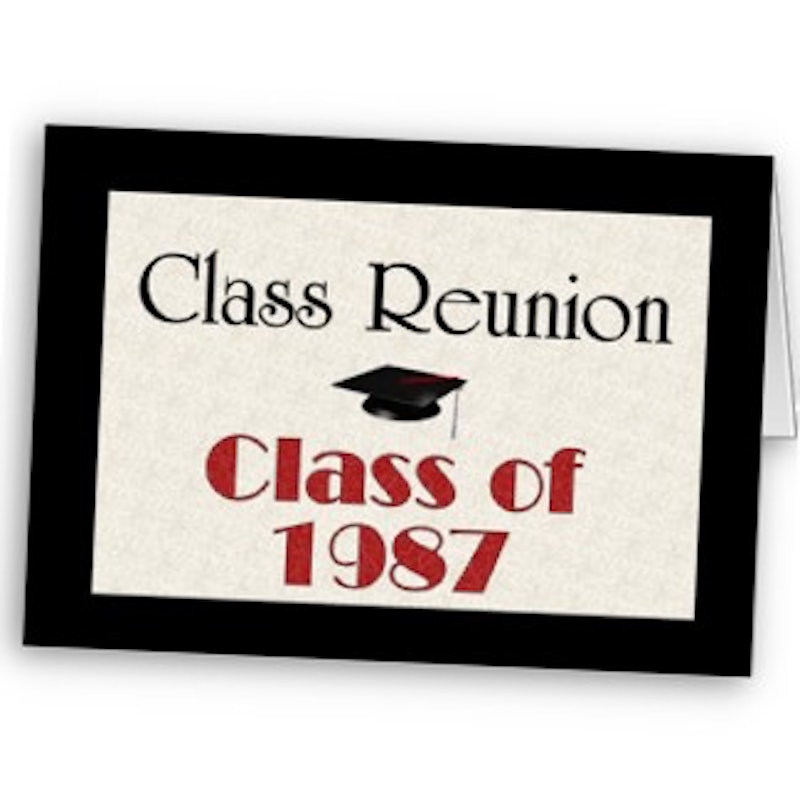 I traveled to my home state of Pennsylvania* last weekend for Thanksgiving with my family of origin, and for my 25th high school reunion. I spent one night at my single 30-year-old brother’s house in Philadelphia, and two nights at my thirtysomething sister’s house in our hometown of King of Prussia.

The thing that struck me the most about visiting my brother is that he has a TV that plays whatever channel you want. Tosh.0 was on when I walked in. This is a show I would watch if I had a TV that wasn’t hogged by the five other people in my house, because it’s funny and about the Internet. More Comedy Channel goodness followed—Stewart and Colbert consecutively! I kept waiting for someone to turn on Deadliest Catch, Are You Smarter Than a 5th Grader, Big Foot Hunters or other shows I am forced to watch against my will. I marveled at his television freedom. His really good bourbon and non-1881 shower with excellent water pressure provided additional magic.

We walked to the station and took a train downtown where we ate at a posh restaurant where they put bacon in sushi. In the morning we went for a walk through historic RittenhouseTown. Let’s put it this way: if it weren’t Flowers in the Attic creepy, I would totally live with my brother.

Then after an amazing Thanksgiving dinner at my parents’ house where I requested an IV for my mom’s giblet gravy, I went to my single sister’s house. She also has the ability to choose programming for the television in her house, so we watched a movie that was Rated R (Quick movie review: Abraham Lincoln, Vampire Hunter, despite its main activity in the film, did not suck at all). In the morning, she made coffee and then we had delicious Jewish deli breakfast food delivered, because apparently you can do otherworldly things like that when you don’t live in a bumfuck small town in Maryland (I am talking omelettes and bagels and lox brought to where you are in your pajamas).

My sister helped me obtain hair and makeup services for my 25th reunion. As someone who doesn’t use a blow dryer and keeps only a mascara and a lip gloss for social emergencies, it was crucial to have her guidance. She also gave me six purse choices (she has purse choices!) and decorated me like a Christmas tree in jewelry and accessories. After the fairy godmother finished bippity boppity boo-ing me, I was off to the ball with my dearest high school friend and former bridesmaid, who looked stunning.

Probably 100 of my former classmates were there. Only four of us hit the dance floor (Paula Abdul “Straight Up” and Def Leppard “Pour Some Sugar on Me”? Yes please.); I was not ashamed to be among the few dancers. I remembered from our 20th that I wished I’d danced—it’s just something I don’t get to do in real life and I love it regardless of my ability level, and particularly when Grey Goose Dirty martinis are available.

I had a blast. It was great to see everyone. Well, most people. There was the guy (let’s call him Sklarberger) who was a producer on the TV show I anchored during high school. In the high school yearbook, he had listed me (by name!) as a pet peeve. I did manage to get an apology for that at the reunion, but not before he referred to me and the other news anchors as “window dressing.” It occurred to me too late to call him a button pusher, which was both accurate in the television production sense and metaphorical in the “you can’t please everyone” way. Suck it, Sklarberger! I should’ve thanked him for the early lesson on dealing with haters, and besides, he couldn’t burst my fun reunion bubble time. Especially not while they were playing 80s music.

*Okay, technically I was born in Camden, NJ, which I normally don’t admit because we moved to PA when I was like two; I took only the Jersey Girl Hair with me.