The Black Couple on Line and Other Stories of New York

Miserable grad students, loser would-be actors and a couple of douchebags who got caught trying something. 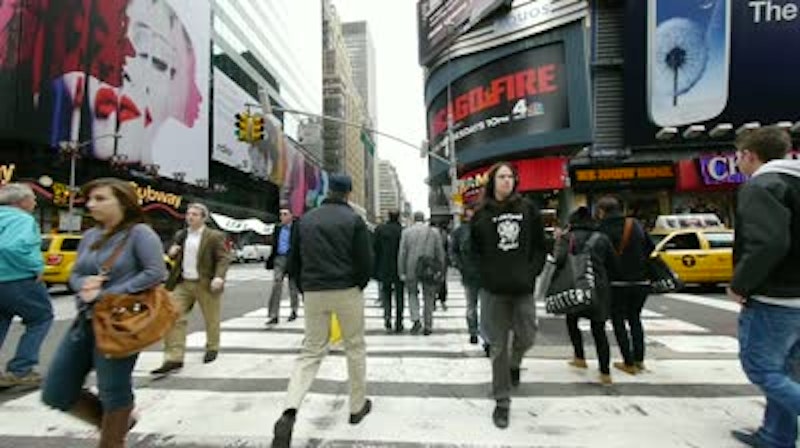 Years ago I lived in New York City. It was a hell of a place, and strangely I do not miss it at all. But I've written down some memories of what I saw there, and now I present them to you.

Times Square. This is before the place gets gussied up and slapped into shape by Rudolph Giuliani. The sidewalks are crowded by drug dealers and personnel associated with the sex trade, but also by tourists and theatergoers. A lean black man stands at one corner as the faces glide by. “You feel your chest tighten,” he announces to them, since many are white. “You feel your breath shorten. You look about you. Shouldn't you be home?” The faces look at him with mild curiosity. His attempted mindfuck—a terribly mistaken one, given the crowd's racial composition—is treated as part of the show.

Amsterdam Avenue and 85th St. A knot of youngish whites gather outside the entrance to a church basement. Two of them are debriefed by the others, eagerly debriefed. On closer inspection everybody proves more “ish” than young: chins sprout under chins, sweaters strain at the belly, jeans spread wide, crows feet notch the corners of their eyes. The kids, or “kids,” are talking about an audition, one possibly held in the church basement at hand. All those years gone by in their lives, and here they are hanging on the outcome of an Off-Off-Broadway tryout.  “You told them, right?” one says. “It isn't attacking blind people. It's attacking people who don't like blind people.”

The 6 train, near Astor Place. It's crowded, and two pasty-looking women in their 30s slouch with their hands gripping a pole. From their conversation they appear to be grad students, no doubt at New York University (which is nearby). One of the girls has a twist of her lank hair hanging down, weighted by a barrette she seems to have forgotten.

Together the women give off an air of free-floating disgruntlement. It's easy to imagine them clocking long hours studying, slaving toward degrees they're not sure they want, degrees to be bestowed on them by people they fear and don't respect. Right now the barrette girl is talking about a neighbor in her dorm hall. “You know?” she says with great bitterness. “He puts on his little boy act and touches my elbow. He always does that when he wants something.” Listening to her, it sounds like the incident makes up the whole of her ongoing sexual activity.

74th St. and Broadway. It's Saturday evening and a long line is making its way into the theater where Brother from Another Planet is showing. The movie is by John Sayles, a popular indie director, and it's a comedy about an alien from outer space who finds himself in New York City. The twist is that, for once, the alien is black. As a result, the line has its share of young, white indie fans but also its share of black moviegoers out for a Saturday.

Way back at the end of the line, I am stationed behind a young black couple. They're both tall and slim, and they're dressed to the nines: a tight black dress with pumps, a suit with sharp creases in the slacks. Hovering nearby is another couple, this one white. The boy is small and compact, and he wears Thomas Dolby glasses and a waistcoat sold at a thrift shop; the girl is even smaller, a pretty blonde with a short skirt, highly polished bowling shoes and what I think is bobbed hair. The two of them are not actually on line. They bought their tickets just moments ago and are now hovering as the black couple and I near the theater's entrance. They wait, their eyes on the gap between the black couple and the backs of the people entering the theater. The white couple drifts toward that gap. Then they edge toward it. Yes, incredibly, they want to cut ahead of the last three people on line.

The black man speaks his thoughts into the air. “I hope not,” he says. “I hope not. I… certainly… hope not.” The white couple freezes. In fact they aren't even behind me as I finally get inside.