It all started at City Lights in North Beach. 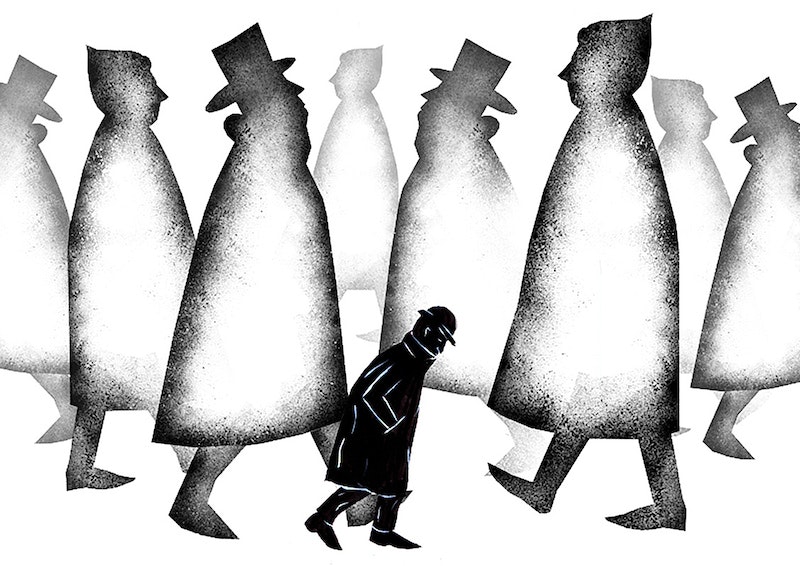 I was rummaging through the stacks of City Lights Bookstore in North Beach when I noticed an attractive young woman in the Russian Literature section. She was reading The Overcoat by Nikolai Gogol, one of my favorite authors. I feigned interest in the nearby books, summoning the courage to speak to her.

“I love that book you’re reading,” I said. “I won’t have any coffee today. Just hot bread and onions.”

She gave me a strange look.

“That’s from The Nose. It’s the third story.”

“I haven’t read that yet,” she said. She had a European accent.

She had beautiful green eyes and soft pink lips.

“You don’t meet many Russian literature fans,” I continued. “How’d you discover Gogol?”

“A friend thought I’d like it since it’s weird and twisted.”

“That was my major in college, weird and twisted.”

I hoped for a laugh. She remained stoic.

“Nice to meet you, Adeline. Where are you from?”

“What brought you to San Francisco?”

“I studied philosophy at Berkeley.”

“That ought to get you a lot of job offers.”

She flinched as if my joke was an insult.

“I don’t usually strike up bookstore conversations. I figured since you were reading Gogol maybe we’d have something in common.”

I took this as encouragement.

“How’d you like to continue this conversation over dinner?”

She grabbed a pen from her purse and reached for a book store flyer advertising an upcoming talk on Death and Dying. She scrawled her address on the back of the flyer and handed it to me.

On Friday, I took a bus to the Lower Haight District. I walked south on Divisadero Street through the Panhandle toward Pacific Heights. 49ers pennants were everywhere in celebration of the team’s fourth Super Bowl victory in nine years.

As I reached the 1600 block, I searched for Adeline’s apartment. I came to a large stone and glass building with a sign reading “Mount Zion Hospital Psychiatric Clinic.” My heart sunk. She’d written down a false address to avoid dating me.

I turned to leave when I decided to check the address anyway. The front door was locked. I pressed the buzzer. A white-smocked orderly appeared. He seemed annoyed at my presence. I asked if a woman named Adeline was there. He told me to wait and then disappeared into the building.

A few minutes later, Adeline appeared, sans makeup, her brown hair in a bun. She wore a long-armed green blouse with a frilly collar. I did my best to hide my shock. Was she a patient in the psych ward?

We began walking on Divisadero.

“You do anything interesting today?”

“I went to the Palace of Fine Arts.”

“I sat by the lake and read my book.”

“You get to the story of The Nose yet?”

I smiled. We turned onto Broadway and walked toward North Beach. As we approached the Broadway Tunnel, she stopped. The tunnel was about a quarter-mile long, but it was dark and loud from the traffic. She seemed wary.

“You want to take the steps?”

She nodded yes. We walked over the tunnel and descended the steps on the other side. We continued down Broadway across Columbus Street past the sleazy strip joints and Italian cafes.

I led us to my favorite eatery, Mario’s Bohemian Cigar Store Cafe. We sat at a small table near the door. I ordered a carafe of Chianti.

The waiter brought water and wine. I perused the menu. Adeline stared out the window at Washington Square Park where teenagers tossed Frisbees and locals ate lunch. She looked sad. She noticed me staring and looked away.

We were both cognizant of the elephant in the cafe, her presence in the psychiatric hospital. I decided to break the ice. I leaned forward and whispered, “Why are you in the hospital?”

She looked into my eyes, probing to see if I was safe. She rolled up her right sleeve and showed me her wrist. There was a thick pink scar, slightly raised and raw. I noticed other scars up and down her arm. She covered her wrist again.

“I tried to kill myself six months ago.” She was shaking.

“I’m glad you didn’t succeed,” I said hiding my shock. I reached for her hand and squeezed.

“You want get food and sit in the park,” I asked.

She got salad while I ordered a small pizza. We walked through the park and sat on the steps in front of Saints Peter and Paul Church. It was a beautiful day, the fast-moving clouds dissolving over Coit Tower. We watched a group of Chinese seniors practicing tai chi.

I wolfed down a piece of pizza.

“Are you from San Francisco,” she asked.

“I lived in Los Angeles until I was 24. Then my girlfriend broke up with me. It sent me into a tailspin. I started drinking and smoking pot and next thing I know I was thinking the world would be a better place without me. I made a list of ways to kill myself. I hated guns so that was out. Knives seemed too painful. I’m against pharmaceuticals so that ruled out sleeping pills. I thought about jumping off a building but what if I landed on someone? One night I was stoned and listening to David Bowie’s “Space Oddity” when I just plunged into this dark hole. I got into my car and drove toward Dead Man’s Curve on Mulholland Drive. That’s where Jan from Jan and Dean drove over the cliff. I pressed down on the gas. When I got about 100 yards away, I slammed on the brakes. I almost went over the cliff anyway. I don’t know what happened. I guess I chickened out.”

“Who are Jan and Dean,” she asked.

“Why did you give me the hospital address? We could’ve met anywhere and I wouldn’t have known you were a patient.”

“Maybe I wanted you to know.”

A baseball rolled across the street from an errant toss between a father and son. I grabbed the ball and tossed it to the boy.

We finished eating and went for lattes. We walked to Fisherman’s Wharf and listened to the barking sea lions. We strolled through an outdoor Farmer’s Market at the Marina and then headed west on Union Street. We entered an art gallery featuring a collection of Polish movie posters. Adeline was attracted to a poster of Hitchcock’s Vertigo with a human skull framed by a bullseye. My favorite was a poster of Chinatown with Jack Nicholson getting his nose slashed.

As we walked, we held hands. I felt butterflies and tingles down my arm as if I were falling for Adeline. I also felt protective toward her, aware of her tenuous state. We traversed the steep Fillmore Street hill. At the top, we took in the beautiful vista of San Francisco Bay. The Golden Gate Bridge was shrouded in fog while Alcatraz gleamed like a diamond.

“I always felt Alcatraz was cruel,” I said. “The prisoners were so close to the city they could hear people laughing and singing while they were locked in a cage like animals.”

“That’s how I feel,” Adeline said. “Everything around me is beautiful but all I see is darkness.”

“You won’t always feel that way.”

We entered Pacific Heights and sat at a table in front of an ice cream shop. A woman in sweatpants approached with a black and white Husky. The dog licked Adeline’s hand. For the first time I saw her smile. She was beautiful.

“He doesn’t do usually do that with strangers,” the woman in the sweatpants said.

As the sun went down, the temperature dropped. We resumed walking, again holding hands. We cut down California Street to Divisadero. We approached the hospital where she was staying. I felt sad. I didn’t want the night to end.

She furrowed her brow and drew her lips in tightly.

“My mom is coming from Germany. She’s taking me back home.”

I felt the air escape from my lungs as if I’d been punched in the stomach.

I grabbed a pen and notepad from my back pocket and scrawled my address.

“I can’t promise that I’ll write.”

“Of course, of course,” I answered. “No pressure.”

I leaned forward and kissed her cheek and forehead. I hugged her. We held the hug for a long time before she pulled away. She offered a half smile and then entered the building. I watched as she disappeared from view.

I stood in place for several minutes, stunned. I cursed my luck. Then just as quickly, I felt elated. I’d finally made a connection in San Francisco. I began walking home.

Several years passed. One day I came home from work and found an airmail letter in my mailbox. It was from Adeline. I tore open the envelope and read her words.

The letter began: “You were right. I won’t always feel the way I felt in San Francisco.” She inserted a smiley face. She wrote she was living in Frankfurt with her parents. She worked at a veterinary clinic helping find homes for lost dogs. She described the process of capturing abandoned animals on the street, nursing them to health and then finding loving families to take them in. This gave her a sense of purpose. She added that our night together in helped her healing process and she was grateful to have met me. She ended the letter with a quote from Gogol.

“Everywhere across whatever sorrows of which our life is woven, some radiant joy will gaily flash past.”

She added a postscript saying she bought a Jan and Dean album and whenever she played it, she thought of me.