Only five major Manhattan place names begin with the leter "I," and four of them are in Inwood, all the way uptown. 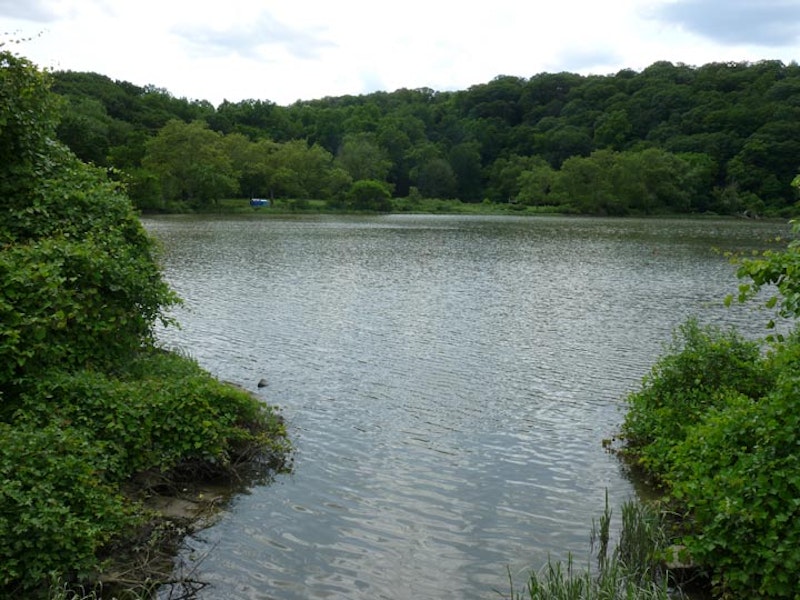 I took a ride up north, about as far north as you can go in Manhattan. There’s a piece of Manhattan actually on the mainland, Marble Hill (although it technically had been on the island, then was an island on its own, then was grafted onto the mainland). Checking the Manhattan map, I noted that of the five major Manhattan place names that begin with the letter I, only Irving Place is downtown. The remainder are all in Inwood! That alone is enough to make me consider a neighborhood for exploration.

Inwood is located in a fairly well-defined area: Manhattan is so narrow at its northern end that you can say that anything north of Dyckman St. is in Inwood. On a map, that works out just fine. By walking around, though, you can detect three separate sub-neighborhoods: anything east of the el on 10th Ave. is gas stations, auto repairs, and supermarket wholesalers; between 10th and Broadway are apartment houses, mom and pop shops, and bodegas; and west of Broadway is the most unusual Inwood of all, since mixed in with the apartments (some of them in gorgeous Deco) you find standalone single and two-family homes, a rarity in Manhattan, as well as the vast, wild Inwood Hill Park. I chose to wander into those spots in Inwood I’d missed before.

The Lenape Indians called Inwood Shorakapok (Kappock St., in Riverdale across the Harlem River, is a shortened form of this). Though it’s often mistakenly surmised that Peter Minuit made his famed purchase of Manhattan Island from the Native Americans at the Battery, the deal was most likely done in what’s now Inwood Hill Park in 1626. During the Revolutionary War, colonials erected Fort Cox, or Fort Cocks, overlooking the Hudson River.

After independence was attained, for the next century-and-a-half, Inwood Hill Park was occupied by a variety of country homes (Isidor Straus and his wife Ida, who lost their lives in the Titanic disaster, lived here—two more I’s) and philanthropic institutions. A system of winding roads traversed the hilly ground. Some of them now describe park paths. The City took title to this territory in 1916 and gradually, for the next 25 years, Inwood Hill Park as we know it was developed. The park includes a salt marsh and “virgin” forest left over from the pre-colonial period. 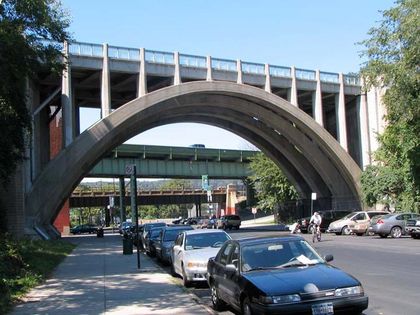 The northbound Henry Hudson Parkway makes a dramatic appearance over Dyckman St. on a steel and concrete arch bridge. The southbound road is carried on a rather more staid span, while Amtrak, formerly NY Central, brings up the rear. The parkway connects W. 72nd St. with the Saw Mill River Parkway and Mosholu Parkway in Van Cortlandt Park and was completed in 1937. As a parkway, it admits non-commercial traffic only. 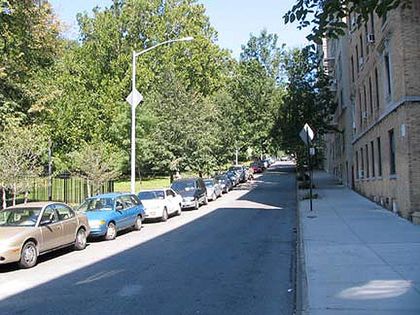 Payson Ave. is a narrow lane bordering the east side of Inwood Hill Park from Dyckman St. to Seaman Ave. Formerly called Prescott St., it was renamed in 1921 for George Shipman Payson (1845-1923) the pastor of the nearby Mount Washington Presbyterian Church from 1880-1920. Attached two-family houses can be seen here.

When looking at Payson Ave. on a map I had always wondered if it were somehow connected with Joan Whitney Payson (1903-1975), owner of the Mets for the first 13 years of that franchise (with husband Charles Shipman Payson, along with George Herbert Walker Jr, an uncle of President George Walker Bush). 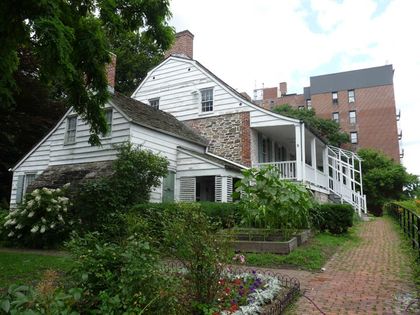 The historical centerpiece of Inwood is the Dyckman Farmhouse at Broadway and W. 204th St., which has been here since about 1785 and is Manhattan’s last remaining Colonial farmhouse. It was built by William Dyckman, grandson of Jan Dyckman, who first arrived in the area from Holland in the 1600s. During the Revolutionary War the British took over the original Jan Dyckman farmhouse; when they withdrew at the war’s end in 1783 they burned it down, perhaps out of spite.

The farmhouse was rebuilt the next year, and the front and back porches were added about 1825; the Dyckman family sold the house in the 1870s and it served a number of purposes, among them roadside lodging. The house was again threatened with demolition in 1915, but it was purchased by Dyckman descendants and appointed with period objects and heirlooms. It’s currently run by New York City Parks Department and the Historic House Trust as a museum. A copy of one of the occupying British soldiers’ log huts, with a log roof, is found at the back of the house. The cellar kitchen is particularly engaging, with old waffle irons, sausage stuffers and a child’s game board. 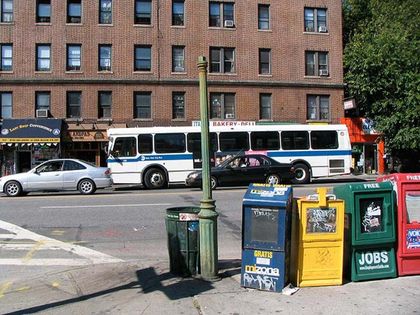 One of two of New York City’s last public gaslamps—at least I think it was—is found where Broadway, W. 211th and Isham Sts. make a triangle. (The other public gaslight is at the end of Patchin Pl., an alley off W. 10th St. in Greenwich Village; it has been electrified). This particular one has now seen a full century on Broadway and parts of two others. Electric-powered streetlamps began ousting the short gas lamps around 1900.

In a photo from the Municipal Archives from 1940, this post is holding a couple of street signs, but I suspect its original purpose when installed in the late 1800s was indeed to hold a gaslamp at its apex. 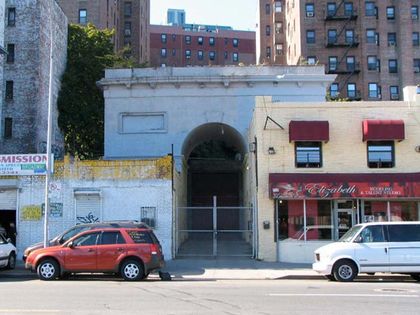 I couldn’t venture into Inwood without paying homage to the Seaman Estate Arch at Broadway near W. 215th St. This is the last remnant of the Seaman estate: John and Valentine Seaman obtained 25 acres of land from Broadway to Spuyten Duyvil Creek and what would be W. 214th-W. 218th Sts. in 1851 and set about building a hilltop mansion. The arch, meant as a gateway to the estate, was first built in 1855. Marble from quarries in the area was used in its construction. Evidence of a large gate, and a room for a gatekeeper, are still in evidence at the back of the arch.

Between 1905 and 1938, the estate passed to Lawrence Drake, a Seaman nephew, and then to contractor Thomas Dwyer, who built several brick buildings on the site and razed the hilltop estate. Since then, it has served as a relic of the Seaman’s once grand domain; it has been left to deteriorate, although in 2021 it seems to have attained stability at last.