A hardcore fantasy football player chooses the game instead of his marriage. 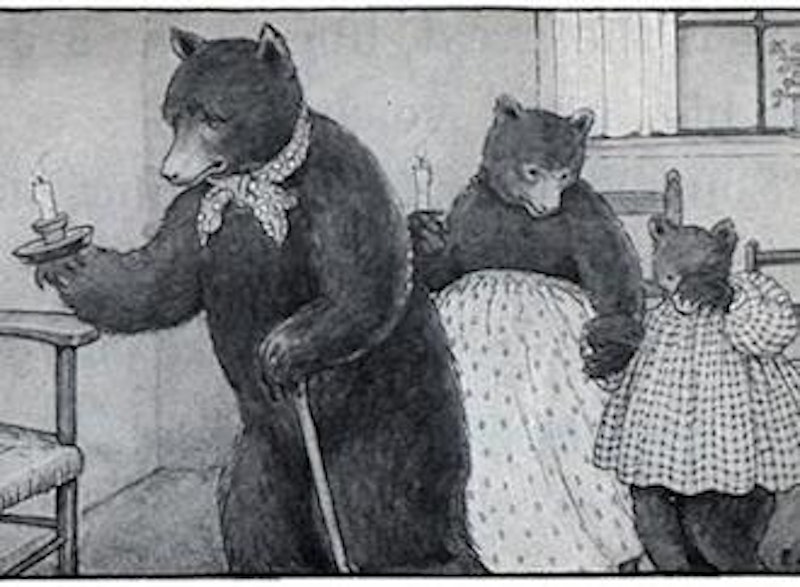 The mama bear looked at the papa bear, struggling to understand what had just happened. “Was it something I did?”

The papa bear sipped his honey. “No, it wasn’t anything you did.”

The mama bear could smell the mayonnaise from the tuna salad the papa bear was eating. “I didn’t think it was going that poorly.”

They lived in a three-bedroom cave in a decent part of the forest. Had they not lived there, neither would’ve ever noticed the place, nor would any would-be Goldilocks out for their porridge. They had some raccoon and mountain lion friends she didn’t really care about and participated in activities that bears their age were supposed to enjoy.

The papa bear took a bite of the tuna salad and another sip of the honey. “I love you, too.”

“So what’s the problem?”

When she married him, he was sad. He’d been sad for a long time before that, too. He was sad in ways that she couldn’t comprehend, even though she wanted to, and it was a terrible shame. “We can’t throw this away. We can’t throw away what we have.”

He moved his claw around in the tuna salad. It’d been left out of the refrigerator for a while and its odor was intense, a putrid scent that made him think back to his picnic basket-stealing heyday. “We do have a lot, that’s for sure.”

They weren’t one of those couples that argued. They discussed problems in a calm, rational way. “Can we talk this over?” she asked.

She wanted to cry. For most of her life, she’d wanted to cry. When she married him, when she gave birth to sister bear and brother bear, when they bought this cave together… oh how she needed these tears that never came. “It’s very important to me. We’ve worked so hard on this.”

He was always 1000 miles away. When their fur touched, which wasn’t that often, it felt like rubbing together two pieces of tissue paper. There had been passion in the beginning, but it waned after a few weeks. “I did everything I could, honey bear,” he said.

He sighed, and his sigh bothered her. “Don’t be glib, honey bear. This is serious.”

It was as serious as any of their other pointless quarrels, she supposed. “It’s a real tragedy.”

She nodded. “I’m sure it has been. Just awful. I don’t know how you can stand it.”

“Look, you’re not making this easy for me.”

No, she wouldn’t make it easy for him. Why would she do something like that? “Yes, I’ve held you back. I’ve stifled you.”

“Well, what are you saying?”

“I’d like a little more time for myself. For my hobbies, you know?”

“Your hobbies?” she asked. “What is it that you do, anyway? What do you need so much time for?”

“It’s”—and here he choked the words out, because what he was about to say was stupid and hurtful—“my NFL draft league. The league in which we have fantasy drafts modeled on the NFL draft. I wish I could spend as much time on that as I used to.”

In other words, he wanted more time to write a bunch of names and statistics on a dry erase board he had hung in his office. He and five of his closest nerdbro friends were obsessed with the NFL draft, which they analyzed tirelessly until it occurred. None of them had watched a football game in years at any level, because their work on the draft consumed most of their waking hours. “You don’t even have a job. You collect disability checks and sit on your tail compiling those football stats, and I go to work at the hospital every day…”

The papa bear thought about that for a minute. Close to the next draft, perhaps. It was only a few weeks away. He was almost perfect last year, right down to the five first round trades. “I think I have it.”

“Have what? Nobody even pays you,” she said. “Why not look for a front office position with a football team, put your research to use?”

It didn’t make any sense, yet the fantasy draft league was everything he ever wanted. Forty-yard dashes. Shuttle runs. Bench press repetitions with 225 pounds. “It’s not like that. I couldn’t do that. That’s not an option. It’s just… this is my year, honey bear.”

She realized then that she hated him. He’d lost himself in a frivolous and empty activity because that was the only place he felt safe. She couldn’t compete with his fantasy draft league. “And you want more time for this?”

State University’s pro day was in three weeks. He had a good feeling about State’s hot young receiver, the third-generation star “Herc” Broadsides IV. A few weeks earlier, Broadsides had run the 40 in 4.34 at an unofficial tryout for the Cleveland Spartans. Granted, favorable winds might have influenced Broadsides’ time, but it was still one of the fastest ever recorded. “He’s a sleeper pick for sure,” the papa bear said to her.

“What? What are you talking about?”

She placed a paw on his shoulder, which was the wrong thing to do. “Are you crazy?” she asked again.