A Defense of the Exquisite Word "Thundercunt" 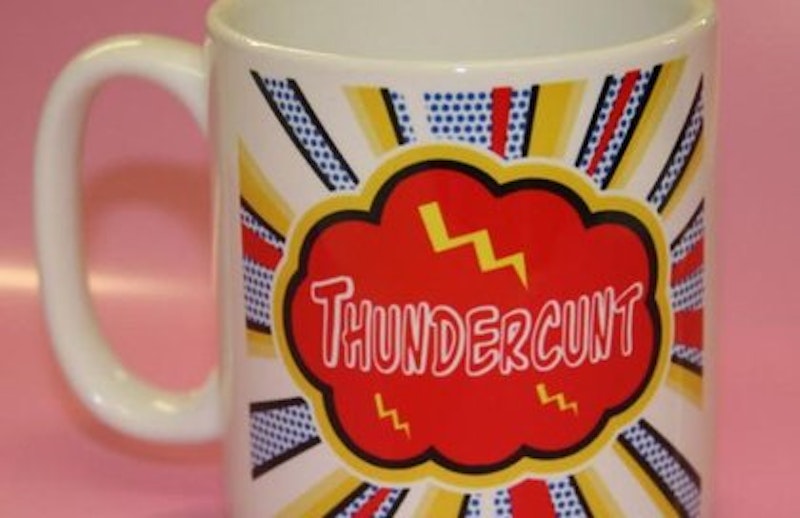 My first novel comes out next month after a two-year gestation. During that time, it’s been through four edits: two with my literary agent (what I called the de-trashification process during which the word “pussy” was deleted), one with a terrible copy editor who made more errors than she corrected and actually called me “daft,” and the final one recently with my publisher. I like my agent and publisher, so three out of the four edits went fine. Changes were suggested, they made the novel better, so I chose to make them.

But I’m no NYU MFA, I’m just a trashy girl who was born in Jersey (raised outside Philly) and wrote a pretty sexy book. My publisher is a brilliant author and businessman and saw the novel through entirely different eyes. Naturally, he was the one who didn’t want to offend anyone. The first cuts were on behalf of potentially offending the gays: something I would never, ever do because I’m a massive fan club member. I’ve always considered the term “fag hag” a compliment, but when it was suggested it might be offensive, even in the context of my woman character and her best (gay) friend, I took it out. Ditto assclown and assmunch, which were used playfully but again, I didn’t want to be offensive.

Profanity is my medium, so I was sad to see some more poignant cusswords get the ax. (Goodbye, “fucktard.”) Apparently, even though my book revolves around a group of women who are cheating on their husbands, I was a little over-the-top with the use of “slut” and “whore” even though the characters were using it inoffensively among themselves. (Adios, “Whore-ton Hears a Ho.”)

There was a massive exclamation mark problem, which I should’ve already known from my Splice Today publisher’s edits of my posts here, but I have a punctuation Tourette’s-type affliction wherein I don’t know I’m hitting that damn button!!! (Farewell, 627 exclamation marks and a shit ton of “?!”s) People smiled and laughed too much, so that’s fixed. Too many eye rolls, got it.

But I drew the line at thundercunt.

“The pinnacle of all English swearwords, thundercunt is phonetically, spiritually, grammatically, and socially the worst thing you can ever say. Much like a Holy Hand Grenade or the most powerful zord from Power Rangers, it should only be used in times of extreme need.

Man: Larry, your home just burned down, and the arsonist fucked your wife
Larry: THUNDERCUNT!!!!
Universe: Shatters a little bit, shaken to its very core

I am in agreement with this definition, particularly as it refers to extreme need. The word should be savored. Overused, the word loses its power. It appears in only one instance in the book, and the track-changes suggestion in the margin noted it was “juvenile; not a word adults would use.” I begged to differ. If ever in a position where I am afraid I’ve overused it, I might jump to another favorite like “Cuntasaurus Rex.”

Frankly, I don’t care if the words sound juvenile. My characters are written in a voice that’s not very far removed from my own, mainly because I wrote them. There are very few synonyms for “thundercunt” and none of them was acceptable. So I rejected the change. I’m all for making the novel better and not insulting anyone, but I also wrote it and if it doesn’t sound like a girl who was born in Camden, New Jersey, well, it just wouldn’t be that genuine. I’m not trying to win a Pulitzer with the damn thing. I’m a storyteller. If some library somewhere won’t carry my book because it has the word “thundercunt” in it, I’m okay with that.

Because the only people who are offended by that word are, obviously, thundercunts.