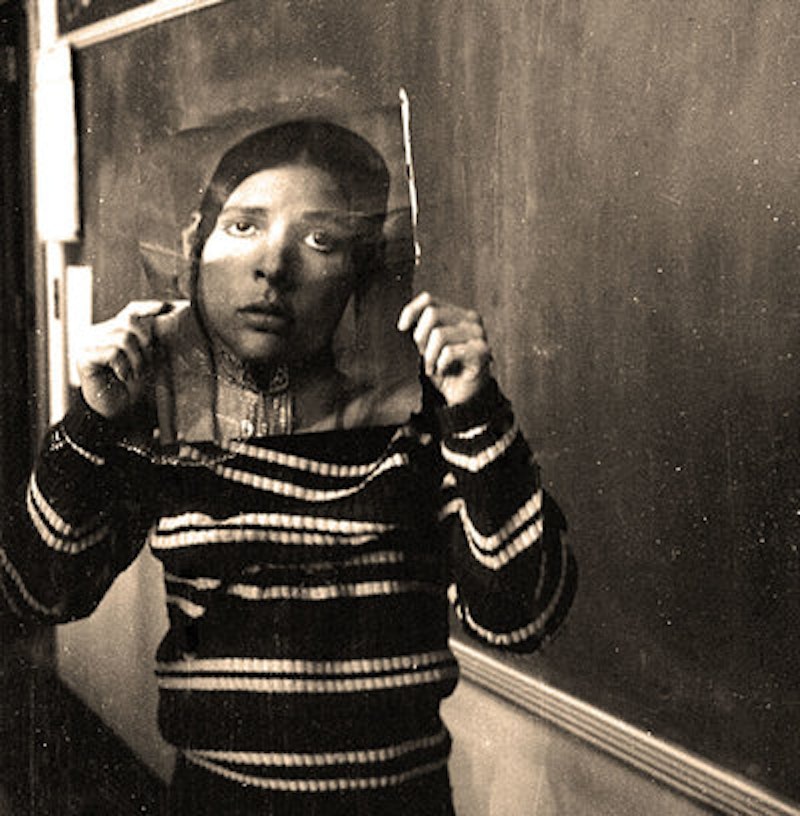 Sister Raphael, a mannish nun we called Ralph, sat straight up in her wooden chair within the cold, stone walls of St. Dominic’s Roman Catholic School. During the winter of 1964, I spent the better part of my mornings in her religion class, repeatedly inhaling the distinctly fragrant aroma of the lavender-blue ink of my freshly mimeographed homework assignments. This provided a cheap high, before I knew what being high was all about. Sister Raphael spent the most of her class lessons talking about mortal sins, while I daydreamed about Shirley Eaton’s Goldfinger painted body on the cover of Life magazine.

The school’s principal, Sister Rita, was a tall, gaunt nun who wore the traditional white cornette of the Daughters of Charity order. At 11:59 every school day morning, with clockwork precision, she held up a brass school bell and rang the bejesus out of it, announcing it was time to go outside.

The doors opened to unveil a grim, granite complex reminiscent of the Wicked Witch of the West’s castle, surrounded by a deserted parking lot, soon to be overflowing with a frenzy of parochial grade school students. The recess break after lunch was a chance to escape from the oppressively dry, radiator-scorched classroom air.

Once outside, staring into the early afternoon white sky, my open mouth created a small cloud as I caught the season’s first snowflake on my lime-green Nik-L-Nip stained tongue, having consumed the contents of a small wax bottle from the candy table.

With the weather as inspiration, I made the Sign of the Cross, pondered my sainthood eligibility, and prayed to St. Eulalia of Merida, the young patron saint of snow. She was subjected to 13 tortures, and after decapitated, a dove flew out of her neck. Small specks of frosty white dotted the dark blue of my school uniform. No heads turned on these ensembles. The classic grade school attire for boys: white Oxford shirt, dark blue trousers, navy blue tie, and black shoes. The girls wore white shirts, blue plaid skirts, navy blue sweaters and black knee-highs with black and white saddle shoes.

One thing that really got the nuns’ panties in a wad was the scandalously ballyhooed arrival of fashion designer Mary Quant’s mini-skirt. Overnight, middle school-aged girls started hiking up their uniform hemlines; one, two, three or more inches. The girls despised the nuns’ military like uniform inspections where the girls were lined up while the nuns used rulers to measure skirt length above the knee, pulling offenders aside by their hair. The boys hid in the cloakroom, giggling. If violations were found, the girls would be “slut-shamed” and sent home immediately to change.

Our playground was on the black asphalt parking lot that ran the length of the L-shaped school. Because it was on a hill, the lot was set on a steep 20-percent gradient, making running and walking difficult. The perimeter of the lot faced middle-class homes and had knee-level guard-rails made with yellow I-beams. The logic of the flawed design would prevent churchgoers’ parked cars from drifting into nearby backyards. Mankind’s engineering genius at work.

As an unenthusiastic and elusive playground participant, I befriended fellow misfits who wore dingy white shirts, odd socks, and thick glasses. My fellow outcasts were usually situated along the outskirts of the playground: like Gilligan’s Island castaways, we sat by ourselves, avoiding the nuns.

Rolling up our sleeves, we went about our business, acting like The Man from U.N.C.L.E secret agents, Solo and Kuryakin, using interrogation tactics on fellow classmates, accosting suspects with rough, tough, cream-puff shake-downs. “Wouldn’t it be nice if you’d show us what’s under your coat, Comrade? Let’s have a look…” Or, “Wait a minute, what’s that shoved down your pants, Russkie?”

We’d open their coats as the suspect-students twisted and resisted in defiance. Once their stash was exposed, they were happy to share. Then we’d stand around wide-eyed reading issues of Classics Illustrated comics, or perusing packs of The Outer Limits trading cards. Other cheap thrills included sticking out our tongues and comparing candy-stain colors, trying to hock loogies on each other, and laughing at dirty jokes peppered with new cuss words.

Eighth grade teachers’ aides, girls who supervised second graders, wore silver badges on white, crossing guard safety belts across their budding chests. My favorite teachers’ aide was a beautiful, coy, saffron blonde named Susan. She kept our group in line and had the patience of a saint as she overlooked our occasional uncooperative behavior.

This was important because during recess we’d find rocks to tap on the lot’s guardrails, which made an incredibly cool, spaceship sound. Sometimes the sci-fi “ping” from the beams became so loud, the supervisor nuns would run over shouting, “Stop it!” Then they’d grab us by our ears and drag us across the schoolyard scolding, “You, my sinner friend, must play with the other children.” We hated being called children.

The school cafeteria was a dark, dismal, green linoleum-laden room. Once inside, your mission was to scarf down lunch as quickly as possible. Bookended by the candy table on one end, and the “poor table” at the other, the long room provided an excellent horizontal sightline for a watch guard nun who made sure the candy-after-lunch law was strictly enforced.

Tootsie Rolls were the hands-down favorites. In 1896, New York City’s Leo Hirschfield named the first penny paper-wrapped chocolate after his daughter, Tootsie. Leo’s recipe mixed some of yesterday’s candy with today’s during the confection process, so we were always eating a bit of Leo’s original recipe.

Then there was the “poor table,” a dismal display of assorted culinary toss-offs where students ditched their mom’s latest failed lunch efforts. The swap table’s lunch-fare featured squished peanut butter and jelly sandwiches, watery egg salads, half-black bananas, and on Fridays, the “Friday fish-specials” of soggy-tuna-on-white mixed with pickle relish. Brown bag lunch sandwiches wrapped in wax paper would often leak, and it wasn’t until the late-1960s that plastic zip-lock baggies appeared. This resulted in lots of sopping wet lunch bags and foul-smelling classrooms, hence the poor table’s popularity, unless you were fortunate enough to have a metal Beatles lunchbox.

During the lunch-break recess, boys and girls played separately, except for one game: the bizarre ritual of Red Rover. While youthful energy was busily expelled playing tag and clowning around, sing-song voices echoed, “Red Rover” throughout the schoolyard. Also known as octopus tag, or the “capture or be captured” game, one team called out a member of the opposite team who would then try to break the human-hand chain-link of the opposing team.

One winter’s day, athletic classmate Terry Jean Roberts changed the face of the games we’d play there forever. This was not her intent, she merely wanted to excel for her team, but her stamina and enthusiasm was ground-breaking.

I stood next to scrawny Bobby Clark in the Red Rover line, swinging our tightly clasped hands in the air and chanting, “Red Rover, Red Rover, send Terry right over.” Bobby’s hand began to slip away, and it was then I realized he was becoming the weakest link. Terry headed toward us at breakneck speed, her hair brushing my fingertips and knuckles, this as Bobby’s hand slid out of mine and we separated. The impending tragedy moved forward, Terry’s head struck the school’s granite stone wall.

Her body crumpled face-down as blood streaked across her neck, into her hair, across her pristine plaid uniform skirt, and beyond her knee-highs. For a moment we stood frozen in shock and helpless, as a gaggle of nuns nervously gathered in the schoolyard and stood us in line, one by one, single file, no talking, for the long silent march indoors, back to homeroom. Terry sustained injuries so severe she missed half the semester. Mercifully, no toe tag, but a nail in the coffin of the newly deemed “dangerous game” we’d no longer be permitted to play.

Sister Rita’s nasal voice crackled with garbled static over the school PA system later that afternoon, as she announced that playing Red Rover was, “…now permanently banned and forbidden.” A welcome change for those forced to play, and probably a good idea generally, as pushing and shoving classmates is usually frowned upon and considered unacceptable bad manners that will surely lead to a life of delinquency. But proving it’s all too easy to forget, Red Rover is just a game. Amen.