What you can remember from a faded photograph. 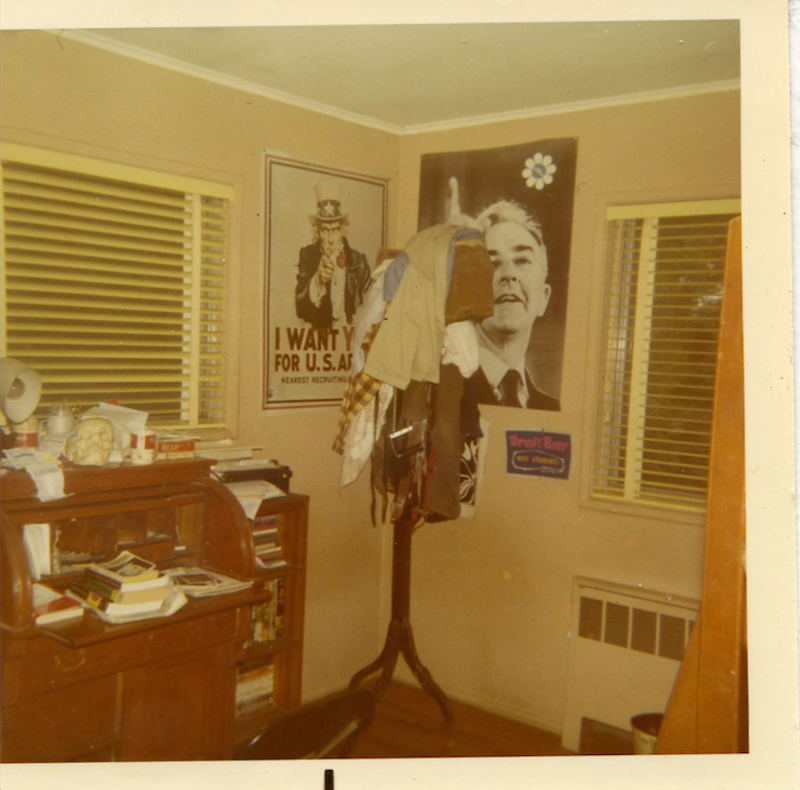 I’m looking at this photo of my Huntington, Long Island bedroom taken in 1970—glasses off, image pressed to my nose—and the first thing that strikes me is just how ugly those pastel yellow Venetian blinds were. Crinkly, too, they didn’t always work. There’s the large poster of Eugene McCarthy from his quixotic ’68 presidential campaign—Bobby Kennedy’s assassination that year was horrific, but he really screwed his Minnesota competitor—with the trademark daisy bumper sticker that was ubiquitous for several months that year. The first item my son Nicky pointed out was the ceramic skull atop the broken-down, but very cool, roll-top desk, which served as a container for all the dollar bills I’d saved from mowing lawns, shoveling snow and babysitting.

Two Campbell soup mugs—why, I don’t know—one with a baseball atop it, another has a silver snake letter opener that was my mother’s as a child. The obligatory 50s cigar box holding old ticket stubs from concerts and Mets games. I can’t make out the titles of all the books on the desk, but suspect most of them were for 10th grade homework assignments; I’m certain that’s a copy of the Village Voice to the right of the books. You can’t make out the print, but that’s a mini-poster underneath the “Clean for Gene” photo, and it reads “Draft Beer, Not Students.” Lots of wrinkled duds on the tree hangar (I haven’t seen one of them in decades), and a small bookcase where I kept favorite New Directions and Scribner titles that I’d buy at the great bookstore, Oscar’s, on Huntington’s New York Ave. A garbage can at the foot of the bunk-bed on the extreme right of the snapshot.

I suppose the room, which was small, looks fairly typical for the era, the middle of three bedrooms on the second floor of a split-level home, one of those “Little Boxes” sarcastically referred to in the song Malvina Reynolds wrote in ’62, but at this point, in 1970, it was mine alone, as my four older brothers were scattered: one at the University of New Hampshire, another in Afghanistan with the Peace Corps, and the two oldest at the start of their professional business careers with families of their own. As I recall, after I’d graduated from a crib in the laundry room, fuzzy memories of panda bears for comfort, I shared this room, two of us in the bunk, another on a cot, which made things a bit cramped. My parents’ room was to the right, and another to the left, with a bathroom for the boys, where we learned that the first in the shower got the hot water; my mom had a rule of one-minute showers at rush hour in the morning, and she gritted her teeth when my two sisters-in-law visited and, used to more commodious accommodations, spent longer than she’d like in the shower. In other words, a normal amount of time.

As you’d expect, I spent a lot of time in the room—although unlike most of my buddies, it wasn’t a place for congregation, since my mom, a very indifferent housekeeper who preferred reading to June Cleaver-like chores, strongly discouraged guests—doing homework, typing articles for school newspapers, smoking dope (opened windows) and the like. No phone in the room, and the record player was in the playroom, as was the TV, so options were limited, although I wasn’t really aware of that fact. Around this time, I drank my first bottle of Boone’s Farm Apple Wine (procured at a deli by a friend who had facial hair and passed for 18, New York’s then-drinking age) and though it was foul, I polished it off in an hour or so, and kept a journal of the experience. Surprisingly, I felt no ill effects the next morning, save for re-reading what I’d written the night before, which started off as a cogent review of a Byrds record, drifted into adolescent heaviness, and finally incoherent ramblings.

I kept my nickel bags of weed, small chunks of hashish, and several Black Beauties in one of the many compartments in the desk; my parents weren’t the snooping types, as they’d seen it all with my older brothers. Funny thing was, my mom wasn’t crazy about cigarette smoking (even though she very occasionally indulged—socially—and kept a pack of Salem 100s in her purse) and I’d have to double up on the mints after a Saturday afternoon hanging out with friends, smoking cheap cigars, cherry-flavored Tiparillos and Kools. It’s not visible in the picture, but I had one of those wind-up alarm clocks on a small table next to my bed, although, like now, I usually woke up of my own accord. One Christmas, I received a clock radio and that was the best: listening to WMCA and WABC Top 40, while lounging in bed reading Rolling Stone or a novel. I must’ve had a chest of drawers somewhere in the room holding my socks, boxers, BVD t-shirts and jeans, but that’s lost to me now. My mom was not the type to make beds in the morning, and neither was I; so it never got done.

One more glance and the picture seems odd: so still and innocuous. It’s an artifact, really, 44 years later, and the stories that, as the old cliché goes, “if these walls could talk,” are all stored in my head.