It feels like Pop Rocks going off in the pleasure center of your brain. 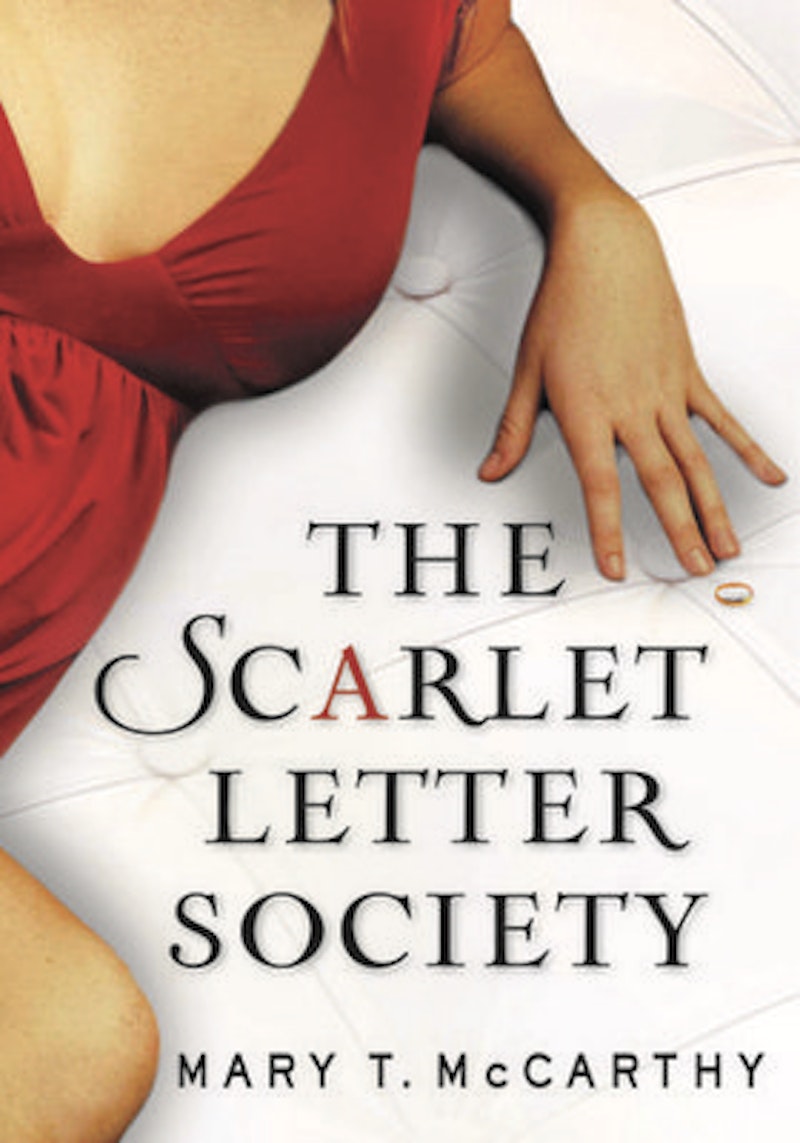 When I read the first sentence of The Scarlet Letter Society, it stuck in my throat. It’s that feeling you get when you’ve just gulped a mouthful of coffee and are pleasantly startled into a laugh. You know you’re going to spew liquid all over your vintage blouse, and those stains are difficult to get out.

Mary McCarthy dyes the fabric of the lives of her characters with strawberry wine, coffee, maraschino cherry juice and the wonderful evidence of orgasm. Good writing engages all the senses: “Her mother would spray that Estee Lauder (a gift, somehow Maggie knew it had been a gift... but from who?) on her to hide the bar smells before she climbed into bed with Maggie; they’d slept in the same bed to stay warm.”

Maggie, Eva and Lisa are the founders and the only members of a book club. The monthly meeting of the Scarlet Letter Society is held at Zoomdweebies Café in Keytown, Maryland. I want to be there, even if it takes place at 5:30 in the morning.

Books don’t always get read, but the club also functions as a sexy, secular confession box. Every month, Lisa prints out an invitation which starts with a different song lyric and this quote from Nathaniel Hawthorne’s The Scarlet Letter: “The scarlet letter was her passport into regions where other women dared not tread.”

I’ll be honest—I’ve never been able to get through The Scarlet Letter. I know what it’s about because I’ve read the SparksNotes. The Scarlet Letter was published in 1850 and set in the 1640s, but a woman who strays in 2014 is still marked by society—we just use different letters, like “S” for slut. There’s no slut shaming in this story, and there is no misandry. It’s a lust fest, but it’s also about love and the challenges of making a marriage work.

Maggie’s been married and divorced twice and she has three lovers, including her ex-husband. Eva has a passionless marriage and what better way to feed that passion than by having an affair with a French chef? Her intern does more than answer email. Lisa has a secret and it isn’t the one about her husband’s foot fetish. The story is told through emails, instant messages, flashbacks and present day rumblings of desire, both fulfilled and unfulfilled.

There are plenty of popular cultural references that resonated with me, including song lyrics and passages from some great literature and the book that shocked so many people in its day: Erica Jong’s Fear of Flying. You don’t have to be nostalgic for the 1980s to hang out at Zoomdweebies Café. Wannabe Scarlet Society member and café manager Zarina gets it. She may be a hipster, but some things are timeless. Like the women who are over 40, Zarina also struggles with her relationship and questions her commitment.

It’s difficult to write a sex scene that doesn’t cross over into the literary equivalent of bukake (a sexual practice that some say was used as a way to punish an unfaithful woman). Go in the opposite direction and you become cloying or end up describing penises as weaponry in a way that isn’t ironic.

Mary McCarthy gets it right. This may be a contemporary woman’s book, or Chick Lit, but if I had a lover, I’d read certain passages to him. Alas, I am alone, so I will keep this passage to myself: “Ron’s black pants hung low on his hips. His blond hair was tousled, and Eva admired his perfect chest and abs as he put the coffee down on the table next to where she was seated. She took two long swallows of the coffee, not minding the heat burning down through her chest. What is that thing called, Eva wondered, as she ran her hand over that smooth area of skin just inside Ron’s hip bones, that amazing V-shaped valley thing? Whatever its name, there wasn’t a doubt it was singlehandedly responsible for the wrecking of homes and the falls of empires.”

I was already familiar with McCarthy’s work. She’s an editor and writer for SpliceToday.com. She founded pajamasandcoffee.com in 2008, and her writing has appeared in The Washington Post, Philadelphia Inquirer, The Baltimore Sun and other publications. She always makes me laugh. McCarthy described her debut novel as a “beach read” in an article she wrote. You may want to rethink that if you don’t want people looking at your flushed face, or listening to that silly laugh you have where you accidentally snort and you’d do anything to stop that. It feels like Pop Rocks going off in the pleasure center of your brain.