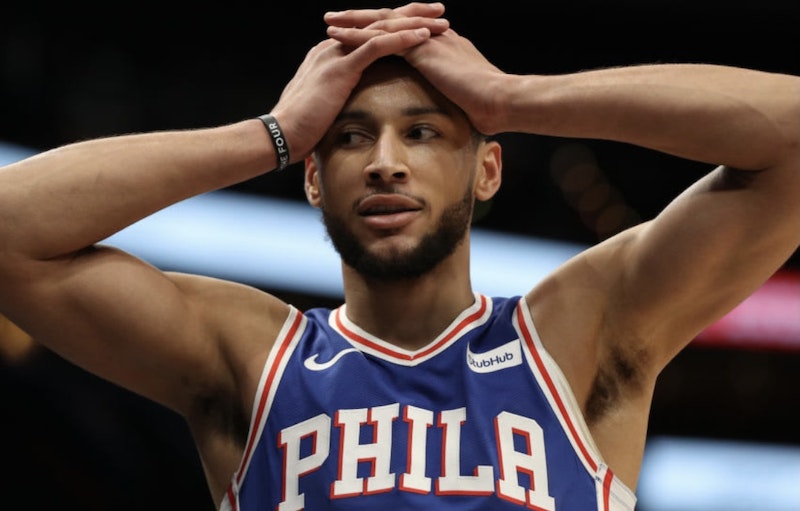 According to the characters on the television series Ted Lasso, which concerns the very American coach of a very British soccer team, there’s one phrase that must never be used: "the yips." To mention the yips is to bring them on. The disorder rears its ugly, yipping head in season one, when striker Dani Rojas (played by Cristo Fernández) finds himself unable to "hit the target," i.e. the goal, i.e. the broad side of a barn. The problem isn’t restricted to fiction. In 2000, Yankees second baseman Chuck Knoblauch was suddenly unable to throw accurately to first base, which essentially ended his career. Perhaps "the twisties," in which skilled gymnasts lose a sense of where their bodies are in mid-flight, and which curtailed Simone Biles' Olympic competition last summer, is a particularly dangerous variation on the yips.

An excellent place to develop the yips is at the foul line in a basketball game. You've got too much time to think about the shot. If you happen to be in an NBA playoff game at "crunch time," the whole world is watching as you ponder. Then, as the ref counts down the seconds, perhaps you "short-arm" the shot or toss up an airball. The hoop, after all, is substantially smaller than a soccer goal, though both evidently shrink under pressure. When you airball a free throw, you make the ESPN "Not Top Ten," rendering your embarrassment immortal. For Ben Simmons, the magnificent point guard of the Philadelphia '76ers, this induced a real crisis of anxiety during last season's playoffs. It got to the point at which Simmons appeared not to want to shoot at all. That contributed to the Sixers’ elimination by the Atlanta Hawks.

Since then, the saga of Simmons has only become less edifying, and whether he’ll play this season is anyone's guess. Entering training camp, Simmons wasn’t prepared to play and was suspended for "conduct detrimental to the team." General Manager Daryl Morey said, "This could go on for four years" (the length of Simmons' remaining contract), and that they'd like to trade him but "need to get back a difference maker." As the regular season began, Simmons told teammates that he’s not "mentally ready" to play to his own and their expectations.

The Sixers organization, very belatedly, offered Simmons its support. They didn't like the way he received it, however, and started fining him again last week on the grounds that he's using players' union psychologists rather than the team's. He has endured vilification from sportscasters and fans, as well as by teammates and executives. "There aren’t many people these days willing to defend Sixers star Ben Simmons," says the Philadelphia Inquirer. "Unfortunately, he only has himself to blame." The ESPN commentator Stephen A. Smith was one of many who claimed Philadelphia fans would never accept Simmons playing for the team again. After Simmons' own statement of his emotional difficulties, Stephen A. kept hinting that it was all a ploy to force the Sixers to trade him.

Teammate Joel Embiid said, "At this point I don't care about that man," and "I'm not here to babysit." Frank Isola, on "Pardon the Interruption" last Friday, addressed the possibility of the team trading Simmons: "He has no value. He has no value.”

The way that the media and the public have greeted revelations of the emotional difficulties of Biles and tennis star Naomi Osaka suggests that progress is being made in de-stigmatizing mental illness. In some quarters, Osaka and Biles' self-revelations were greeted as courageous or even heroic. But the way Ben Simmons has been treated suggests that there's still a long way to go. The progress hasn't been equally distributed between the genders.

Perhaps it’s easier to see a petite young woman than a 6'10" man as vulnerable. A dominant athlete like Simmons is supposed to be hyper-masculine; he's not supposed to need emotional help. But mental illness doesn't care how tall you are, or what your gender is. Simmons, who's 25, looks just as hurt and confused these days as Osaka did when she was really struggling. But it's evidently harder in his case to see the obvious.

Stephen A. Smith displayed these attitudes with crystal clarity. "He was scared," he said of Simmons. "He was a scared puppy out there… You got to suck it up… That’s all Philadelphia wants. He’s coming across like, 'I don’t want to deal with that environment anymore' and they consider it weak and pathetic." If Simmons didn't have emotional problems before, the way people responded to his difficulties on national television would’ve been plenty to induce them.

When I underwent something of an emotional crisis in 2016, I endured on a small scale the sort of vilification that Simmons has received. That I was apparently exhibiting symptoms of mental illness made people angry. Colleagues confronted me about my "psychotic delusions" and "paranoid fantasies" (psychosis and paranoia weren’t among the eventual diagnoses). They told me I was "embarrassing" and that my "reputation in the profession" was shot, like observing angrily that Simmons' problem reduces his trade value. My boss wanted me removed immediately and permanently. No one tried to reach out to me even to hear my side of the story or my interpretation of my own actions or condition. They wanted me fired. I kept my job by lawyering up, but the way I was treated complicated my recovery. And convinced me that the stigma around mental illness is all too actual.

This may be why I had an ambivalent response to season two of Ted Lasso. The title character, the football manager played by Jason Sudekis, has developed panic attacks that are more debilitating than the yips. He has to dash off the field at a key moment in a key game; the problem affects his job performance, in other words.

What Coach Lasso gets from everyone except one co-worker (depicted as a traitor) and one television commentator (portrayed as an ignorant pig)—what he gets from his players, management, even for the most part from the media—is beautiful support, more consistent and caring than Biles and Osaka received, for instance. His job is never threatened; he seems to become more beloved in his vulnerability. The second season ends with the uplifting message: affirm your illness; it's not your fault; many of us struggle; we must let go of the stigma.

Well, I agree, and imagine Ben Simmons does too. But if Simmons is watching Ted Lasso, he's got to be thinking that the world it depicts is not the world in which he's actually living. The show has a glow of unrealistic, uplifting fantasy, which is one reason that people like it. But here it does us the disservice of indicating that the key questions of how we should think about mental illness in co-workers or for that matter sports heroes, and how we should treat people who display it, have basically been resolved.

The Sixers situation is one of many that show that the progress in understanding and accepting mental illness—whether it's yips, the twisties, or something more scientifically denoted—has been fitful and uneven across groups. I'd like to see Ben Simmons be less miserable and play more basketball, which is one reason I think Stephen A. and the rest of us should take a brief break from bashing him.