Vaya Con Dios to a Friend I Never Met

Red Sox broadcaster Jerry Remy was the best in the business. 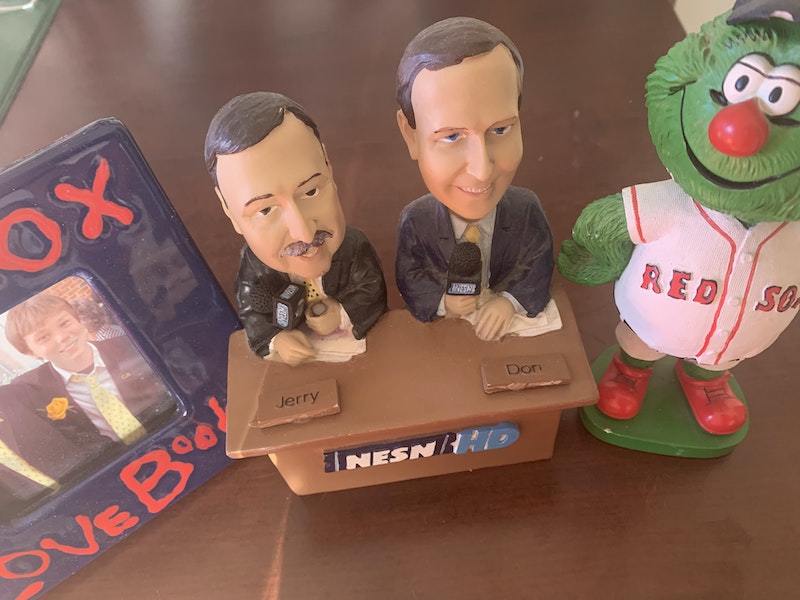 Like the vast majority of Red Sox fans, I never met Jerry Remy, the former Major Leaguer and revered NESN broadcaster who died last Saturday at 68. That didn’t matter. “Remdawg” was a fixture in our household each year, from April until the end of September, and his loss—which was jarringly announced on Twitter early Sunday morning, a stunner even though he didn’t look well on October 5th when he threw out the ceremonial first pitch at Fenway Park to longtime friend and colleague Dennis Eckersley before the Sox dispatched the Yankees in the A.L. Wild Card game—will be felt keenly by hundreds of thousands, including my son Booker and me.

When a celebrity dies, the reaction is either a shrug—if the person, say, is 90, and led a full life—or a moment or more of sadness, depending upon one’s affinity to the man or woman in question. The last time I was stunned by such news was in January, 2016 when my son texted to say that David Bowie had slipped away, just two days after releasing his triumphant final record, Blackstar, his best work in three decades. Unlike Jerry Remy, who was first diagnosed with cancer in 2008, and took periodic leaves of absence from NESN for treatment when the disease resurfaced, Bowie was buttoned-up about his health struggles. Blackstar is eerie and hypnotic, and though I played it non-stop upon its release two days before his death, and figured something dire was imminent, I can’t listen to it today, not for prolonged grief (it’s unimaginable, at least to me, to “grieve” for anyone but a family member or close friend), but rather because it’s more of a full-length dirge, not a collection of songs. Who needs that?

Booker and I, when we first ordered MLB Extra Innings in 2003, the relatively cheap package which allows you to see all major-league games, were immediately drawn to Remy, and his then-partner Don Orsillo (disgracefully dismissed by Boston’s ownership group in August of 2015; I’m far from the only one still pissed about that), delighting in RemDawg’s dry wit, or in-your-face hilarity, especially in lopsided games, either for the Sox or their opponent. Obviously, it was more fun when the Sox had a great season—the four World Series championship years of 2004, 2007, 2013 and 2018, but also when the team was in contention—and Remy made no bones about being a “homer.” After all, he was raised in Massachusetts, had a pronounced accent, and after a stint with the California Angels, played second base for the Sox from 1978-84, a good career cut short by injuries.

(It should be noted that if you were a Sox fan who didn’t live in New England, TV broadcasts weren’t an option. In fact, you’d often have to wait until the next day to read the box scores in the daily paper to find out the results. One time, late in the ’88 season, returning from a wedding on Shelter Island, I annoyed two friends by shunning their banter and fiddling with the radio for WINS to find out if the Sox won a crucial game.)

The 2006 season was brutal, especially in the second half, punctuated by a five-game sweep by the Yankees at Fenway; after that debacle Remy and Orsillo still made the games worth watching, doing a stand-up routine that left them, and viewers, in stitches. The pair would often violate the art of joke-telling by cracking up while trying to get it out, but that was part of the fun. Remy would point to a young couple in the stands, and say “I don’t think that schlub has a chance with the gal, she’s too high-class. What about you, Don?” Orsillo was a touch more diplomatic, but would add a few comments. That same season, the two of them made a running joke of—I think it was a NESN employee—a man they called “Flabio,” for obvious reasons. This went on for a couple of weeks and then abruptly stopped—even an institution like RemDawg had bosses to answer to.

Booker and I were dedicated: we bought the Jerry and Don bobblehead (shown above), subscribed to his newsletter “The Remy Report”—he was president of Red Sox Nation, which he campaigned for on-air and online—and even bought a ridiculous, and amateurish DVD of the pair mimicking Daisuke Matsuzawa’s “gyro ball.” During night games, we repeated along with RemDawg, “Buenos noches, amigos!,” his trademark sign-in. When he was laid low so many times for chemotherapy, none of the other broadcasters repeated that line, in graceful deference to Remy.

Like most former players who retire to the broadcast booth, Remy was especially keen to point out strategy that related to his position and style of play. Even this year, before he became sick again, decrying this age of analytics, Remy (who stole over 200 bases in his career) would advocate a Sox player bunt, steal or pull off a hit-and-run. He lamented that few players could lay down a sacrifice bunt, let alone a drag bunt for a hit. He also couldn’t stand the camaraderie of players on opposite teams, chatting when they got on base, and recalled, with relish, how during his career (and onetime teammate Dennis Eckersley, also on NESN, would chime in, agreeing) how much they despised other players, at least on the field, especially the Yankees, and remembered real fights between teams, not the for-show emptying of dugouts and bullpens that you see today.

According to colleagues, players and his family, Remy’s biggest passion was baseball. He owned restaurants, was invited to speak at gatherings during the off-season, but off-air, by his own admission, was a hermit. He suffered from depression—which he was open about with his viewership, in addition to the cancer—and hit a very low point when his son Jared was imprisoned for murdering his girlfriend. When Orsillo’s NESN successor Dave O’Brien (I’m not a fan of O’Brien; he’s a bland, professional sports announcer, and oddly, even though he grew up as a Sox fan and going to Fenway, his accent is USA-neutral) would talk about his apparently successful children, Remy would nod along, but you could sense his discomfort.

Earlier this week, in The Boston Globe series of articles about Remy, Chad Finn was on point: “There were so many reasons for Red Sox fans to appreciate Remy as a broadcaster. He sounded like someone you knew, your neighbor or your uncle, and you spent so many summer nights listening to him that you felt like you did know him.”

Finn also quoted Orsillo (now the voice of the San Diego Padres): “We had a great time. I know we strayed into laughter sometimes… but when a game can last three, three-and-a-half hours, I think people really need that level of entertainment. And it was never scripted… When we were on the air, it was two close, best friends talking about baseball.”