Morning Kickoff, Pitch Invasion, How was your Sunday? 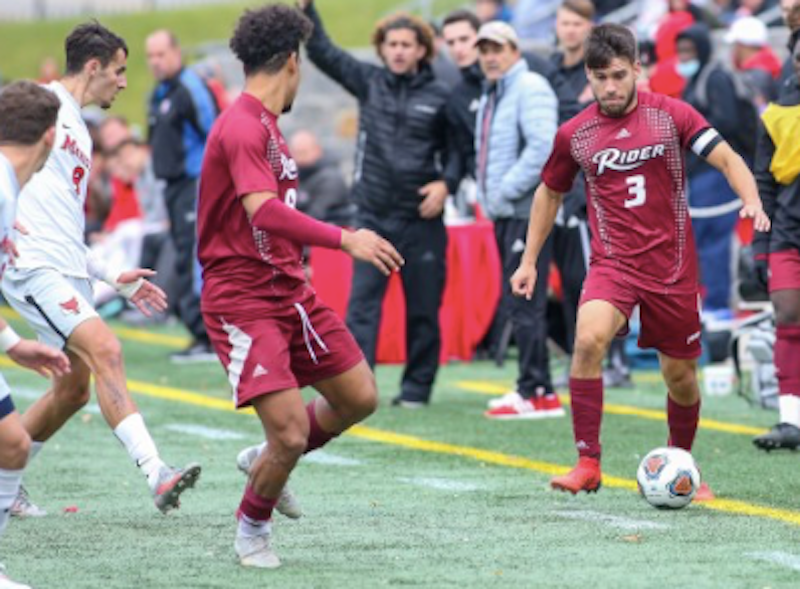 Marist College was playing for the Metro Atlantic Athletic College men’s soccer championship and it was a Sunday in November in Poughkeepsie. The Rider College Broncs were in town from suburban New Jersey to vie for the crown, which would send the winner to the Division 1 NCAA College Cup bracket tourney—an ignored November Madness, if you will. Of the 206 D-1 squads in college soccer, 48 would advance to this tourney via conference championships or at-large bids. Marist, of late, had been pretty good but not that good to surpass rivals such as Monmouth University to gain entry into the Big Dance.

The odd thing was this past Sunday it was an 11 a.m. kick off for the Marist vs Rider final at Tenney Stadium along Route 9. I’ve never once been inside a stadium where the PA announcer greeted fans with “Good morning!”

It started all sunny and pre-winter warmth, but by the time the match ended there was an overcast chill. It took exactly three hours. The fan-base was definitely hungover, and the beauty is those who withstood the weather change were rewarded with an old-fashioned pitch invasion as Marist pulled it out in penalty-kick shoot out style. The 700 students in attendance stormed the pitch when Brooklyn native Sam Illin, the 2021 MAAC goalkeeper of the year with a David Seaman-style hairdo, saved a PK that would allow the Red Foxes to advance to the tournament for the first time since 2005.

As a soccer nerd, I got to the match early and found a nice high seat in the stadium overlooking the NextTurf pitch and the fall colors surrounding the Hudson River. What else does one do on a Sunday morning? Soon, I found myself surrounded by the student body famous for Covid-19 outbreaks, so by the end of the first 20 minutes of the match, I moved down to the solitary sidelines behind linesman Lev Dashev. This was the largest crowd I’d been amongst since the pandemic struck. Usually when I “cover” events I like multiple angles and different vantages, so mobility is the order of the day. I’d settled in initially near members of the Kingston Stockade semi-pro team locals who were there to support Red Fox soccer that makes up part of their spring-season roster in the National Premier Soccer League squad, especially keeper Dylan McDermott, who is surprisingly Marist’s number two keeper behind Illin.

McDermott, a sprawling Randy Johnson-style lad, had an outstanding season with Kingston Stockade this past season, will be a senior for Marist next year and will probably ascend to number one status as Illin, a New York Red Bull academy guy, shall graduate in the spring and depart with his hairbrush in tow. Illin made an awful mistake in the championship match that gave Rider lifeblood. He was nonchalant on a backpass to a defender which was picked off and put in the back of his own net by a guy who’d just came on as a sub for Rider. He was Tyrell Moore of Brooklyn, who’d transferred to Rider from soccer powerhouse Wake Forest for some reason. Marist had been up 2-0 on some keen shooting, but Illin’s mistake gave the Jersey intruders some hope and momentum.

An own goal by Marist under pressure as the second half commenced gave Rider a 2-2 situation, and suddenly the over-confident Marist fans were pondering how a fifth-seeded team could come into Poughkeepsie and mess up the soccer situation. The rest of the second half proceeded with Marist hitting the goalposts a few times and Rider stealing an occasional chance at taking the lead. Surprisingly Rider wasn’t red-carded for excessive abuse of the aforementioned linesman Dashev. I’ve been on the sidelines of many rec soccer and high school matches and absorbed the dialogue between players and officials. The Rider Broncs treated the ref and linesmen like extras from the movie Cruising with Al Pacino. Especially prevalent in his abuse of the linesman was Regis Dulck, a redshirt senior from Ostwald, France, a six-foot-four 198 product of the high school Lycee Jean Mannet in Strasbourg. His preferred method of ridicule for the linesman was a crotch-chop gesture accompanied by loud verbal abuse.

Having been directly behind the linesman for the duration of the second half, I was astounded by his tolerance of Dulck’s vitriol, much of it not warranted at all given the circumstances. I smelled a potential red card for our beret-wearing Rider center back. Rider also had a pair of Spaniards abusing the linesman—keeper Pablo Gatinois of Madrid, Spain, a business major, and Rider captain Sergio Aguinaga also a Madrid native and defender. They had their own narrative throughout the game and didn’t really include the rest of the backline.

Rider brought about 40 fans to the game and they were eventually surrounded by Marist security after objects were thrown. The Broncs soccer squad also had a kind of South American “divey” style in which injuries were exaggerated on field with extended dramas that resulted in players popping back up to resume play after pretending they had broken femurs. The Rider bench was yellow-carded late in the second half for excessive protest of a ref’s decision, and their coach wore an ancient Rider ballcap worn at the edges which I’m sure contained a story that I wasn’t about to seek out. As freight trains rolled on tracks directly across the Hudson, the Marist fans ominously distributed toilet paper rolls amongst themselves as the second half wore on with the score knotted at 2-2 after the own goal by Marist. Red Foxes head coach Matt Viggiano stood in his shorts urging his squad into overtime when the Spaniard keeper for Rider came up big to maintain the tie.

The penalty shootout was held at the end of the pitch in front of the silvery indifference of Marist’s Donnelly Hall. The Spanish keeper for Rider seemed to want a shootout as he wasted time during several goal kicks during the extra periods. Donnelly Hall is the same building Illin stared at for an eternity after muffing his backpass and giving Rider its first goal during the first half.

The shootout proceeded under gray skies with the temperature 20 degrees less than that of the morning kickoff. All shooters scored low and to the goalkeeper’s right. It was 4-3 Marist when Dulck, the main abuser of the linesman, stepped up for his shot. I’d noticed he was slightly heavy-legged and not that sharp on the ball. I was surprised to see him stepping up at this crucial moment. Illin guessed left and parried Dulck’s shot out of the goalmouth, preparing Marist for the clincher with its next penalty kick. I figured it was karma for Dulck having been so abusive of the linesman. Shit’s stirred up, even in sports such as soccer where decorum usually prevails, at least among the officials.

Watching penalty kicks always reminds me of the guillotine scenes from French movies. You have the lolling drum roll, the anticipation of the falling blade, and the chunking sound and then the roar of the crowd. Enter Jacob Schulman, a senior midfielder from Cornwall, NY. He steps up to the penalty spot and in the silence of the Hudson Valley in its waning fall colors wastes no time to beat the Rider keeper who might’ve been thinking about tapas selections and then Schulman’s classmates stream onto the pitch and he is lying on his back on the fake turf with many different sports field lines on it. It’s exactly two p.m, three hours from when this all started when we all should’ve been attending Lutheran church services but instead decided on the church of student athletes in the mighty fortress of Poughkeepsie.

Marist will go on into the tournament and will face Providence College in Rhode Island on Thursday. That’s the beauty of this business. A school known more for its women’s college basketball program suddenly has a men’s soccer squad heading into the postseason where anything can happen. Marshall University won it last season, out of nowhere. If Marist beats Providence, the Red Foxes will play the defending champion Thundering Herd in the next round. Fitting drama, if you ask me.