Where in the World is Barry Zito?

The pitcher who doesn't pitch. 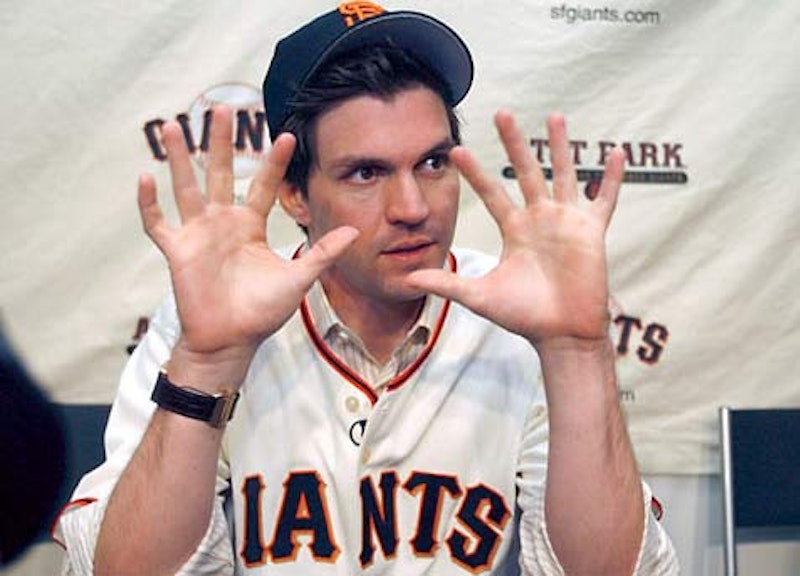 Who makes $18.5 million to pitch in the big leagues and has logged as many innings this post season as Gaylord Perry, Snooki and my Grandma? If you guessed Barry Zito of the Giants give yourself a pat on the back. Since signing his nearly obscene seven-year $126 million deal with San Francisco prior to the 2007 season Zito has become the Incredible Shrinking Ace. The Giants thought they were getting a number one starter in the prime of his career. Instead they got Omar Daal. They paid Bentley prices for a 1978 Pinto. After a record of 102-63 with a 3.55 ERA in six seasons with Oakland, Zito has compiled a 40-57, 4.45 ERA in the weaker league. The results are baffling.

Zito didn’t even make the Giants' active roster for the NLDS or NLCS. Manager Bruce Bochy opted to go with the barely legal Madison Bumgarner as his Game 4 starter over Zito. Zito is the game's most expensive fifth starter. He’ll be a drain on the Giants’ payroll for the foreseeable future as his bloated contract runs through the 2013 season with a vesting option for 2014 that is dependent upon innings pitched.

The Giants lead the NLCS three games to one over the Phillies despite a patchwork lineup. Typical contenders don't rely on guys like Aubrey Huff, Pat Burrell, Mike Fontenot and Cody Ross, but the Giants have been forced to be creative after squandering such a large portion of the team's payroll on the disappointing Zito. Just imagine if San Francisco had the payroll flexibility to make a deadline deal for Adam Dunn, or make a run at free agent Carl Crawford this winter.

It was interesting to see CF Aaron Rowand making starts for San Francisco. Rowand has been nearly as big a bust as Zito, though at about half the price. Rowand was never a star, but he parlayed a career year with the 2007 Phillies into a five-year $60 million deal from the Giants. He's been a disappointment ever since. He hit just .230 with 11 homers and 34 RBI this season.

In hindsight, the Giants were grasping at straws when Barry Bonds’ contract ended after the 2007 season. They had money to spend, but no star power and few impact prospects. They dove into the free agent pool, but never checked the depth of the water. They came away with Rowand and Zito at inflated prices and have been drowning under those contracts ever since. In the subsequent seasons, the Giants have found refuge in their incredible young pitching, but the everyday lineup is a mess. I'd be shocked if they take another run at top dollar free agents anytime soon. If the front office has learned from their sins of the past they'll focus on building a consistent contender around Tim Lincecum, Matt Cain and Buster Posey. Ironically, job one may be giving Lincecum a Zito-like deal.