How to account for the huge shifting in ERA stats over the past ten years? 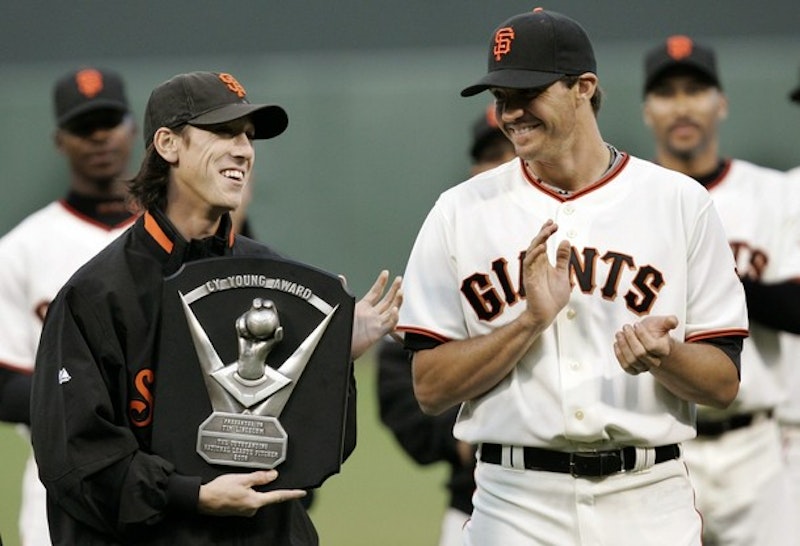 I couldn't have been more wrong with my World Series prediction. I picked the Rangers to win in six games and then watched them stare helplessly as the Giants pitchers fired fastballs on the black. The Rangers’ bullpen was terrible in games one and two, but it wasn't the reason they lost either game, or the Series. The Giants were simply better, allowing just 12 runs in five games and getting big hits from all over the lineup. The Giants won with a ragtag bunch of castoffs and waiver claims like Juan Uribe, Pat Burrell and Aubrey Huff. I guess Deivi Cruz and Garrett Atkins were busy. I've spent 12 years watching the Orioles lose over 90 games a year running out lineups that looked a lot like the Giants lineup; emphasis on awful. I just didn't see how that group could score enough to keep up with Texas, but the Giants’ pitching was just too much to overcome. The Giants pitch, catch the ball and battle at the plate. In essence they play the game as it was intended.

The Giants’ victory was a fitting end to a season that's been dubbed “The Year of the Pitcher.” Not only were there an abnormally high number of no hitters and perfect games in the 2010 season, but a glance at the stats reveals a major shift in how the game is played. There were a total of 13 Major League teams that finished this season with a team ERA of 4.01 or better, led by the Giants with a staff ERA of 3.36. Contrast that to the 2000 season, in the middle of the Steroid Era, in which the Atlanta Braves led all of baseball with team ERA of 4.05 behind future HOFers Maddux, Smoltz and Glavine. A 4.05 team ERA would have placed the Braves 15th out of 30 MLB teams in the 2010 season. In fact the Yankees finished this season 15th with a 4.06 ERA and predictably saw their pitching falter in the playoffs.

There could be many explanations for the drastic shift. Bud Selig may tell you that it means the game is now clean. A cynic may say that pitchers, tired of being pounded senseless, have simply started cheating at the same level as the position players. It could simply be cyclical and the offensive explosion of the 1990s led teams to focus more player development efforts to finding and grooming young pitchers. Whatever the reason, I like it.  A scoreless Lincecum/Lee duel into the seventh inning may not excite the network execs, but it sure looks good to me.

While the Giants aren't a small market team by any measure, the team had a 2010 payroll of close to $100 million and were able to overcome the nearly $30 million that was dedicated to chronic disappointments Barry Zito and Aaron Rowand. Their blueprint may inspire small market teams. The hard part will be finding the pitchers but clearly San Francisco isn't the only team that's hoarded young arms. If the Giants can win behind four dynamic young starters and a lineup thrown together at a flea market why can't the Orioles, Royals, Nationals, Padres or A's?