Can Cliff Lee and Josh Hamilton pull it off for them? 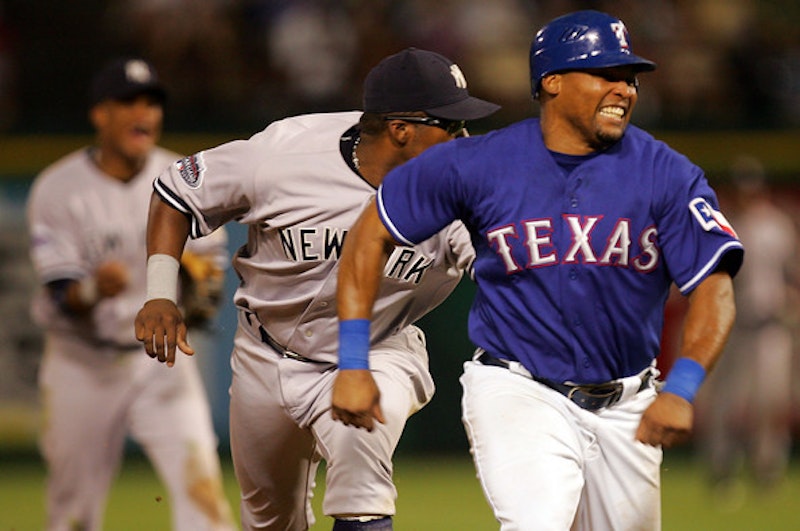 By now everyone knows about Cliff Lee's post-season dominance. The Texas Rangers rode Lee's talented left arm to their first ALCS, which begins tonight against the Yankees. Lee's starts are rivaling Brett Favre's junk and The Situation as appointment television. However, if the Rangers are to advance to the World Series they'll need major contributions from two unlikely sources; starting pitchers CJ Wilson and Colby Lewis.

When the 2010 season started the Rangers were counting on youngster Derek Holland, 2009 surprise Scott Feldman and the oft-injured Rich Harden. The fact that they've advanced this far into the playoffs without much help from any of those three is remarkable. Wilson, who will start Game 1, is a converted reliever. After pitching 258 games in relief, and saving 50 over the past three seasons, the Rangers made the bold decision to move Wilson to the rotation. This season, at the age of 29, Wilson has logged a career high 204 innings and posted a stellar 15-8 record with a 3.35 ERA. He's allowed just 161 hits but did lead the league in walks (93). The Yankees lineup is a notorious meat grinder, running up pitch counts and getting into opponents’ bullpens early in games. Wilson was excellent in his lone ALDS start against Tampa, but the Rays are an aggressive team prone to strikeouts. The Yankees will make Wilson work. If he can pitch efficiently and lead the Rangers to a Game 1 victory at home it sets the Rangers up nicely for the rest of the series.

Colby Lewis will pitch Game 2 for the Rangers. His appearance as an ALCS starter is even more unlikely than Wilson's. After coming through the Rangers farm system as a much-ballyhooed prospect Lewis was greeted harshly in the majors. After parts of three lackluster seasons he succumbed to arm injuries and was released by the team. His missed all of the 2005 season before resurfacing with the Tigers (2006) and A's (2007). He made his way to Japan in 2008 and resurrected his career by posting a 26-17 record with a remarkable 369 strikeouts/46 walks ratio over parts of two seasons. The Rangers signed Lewis as a free agent before the 2010 season and were rewarded with 200 innings and 12 wins. Now Lewis will take the ball on a national stage against the 27-time World Champions. Lewis' struggles and perseverance, though overshadowed by the more dramatic story of teammate Josh Hamilton, is simply remarkable and represents the real life drama that makes baseball great.

I'm picking the Rangers to win this series in seven games, which means the Yanks will probably sweep. The way I see it Texas has the best player (Hamilton) and the best pitcher (Lee) in the series, not to mention home field advantage. In the NLCS I'll take the Phillies in six tough and well-pitched games that will have many baseball lifers excited by the return of real baseball.