Sports journalists were rejoicing that they would be able to imply Newton was released because of his vaccination status. 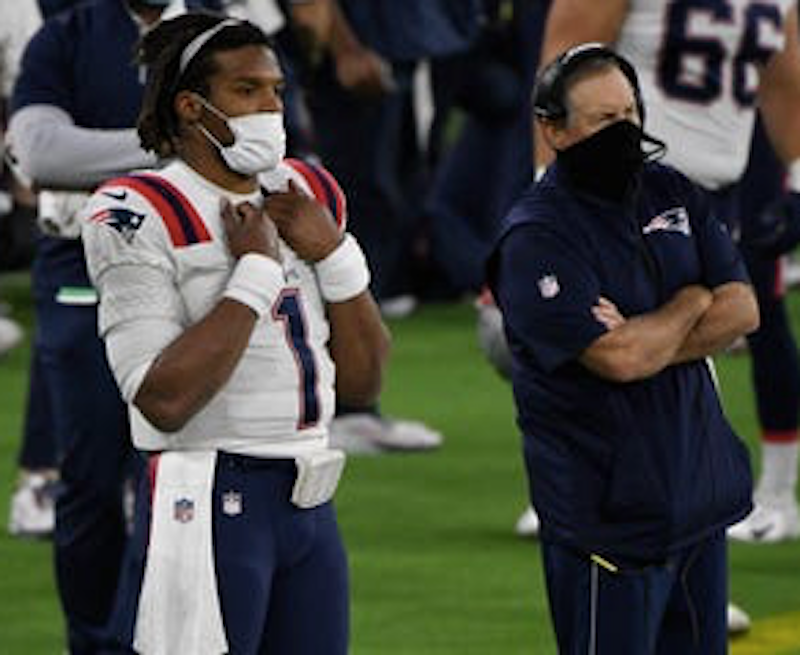 In news out of the NFL, which has illustrated its economic allegiance to China via its insane, unscientific, and discriminatory Covid protocols that treat unvaccinated players like second-class citizens, the New England Patriots have released unvaccinated sinner Cam Newton.

The former MVP with the Carolina Panthers was competing with 2021 first round pick Mac Jones out of Alabama for the Patriots’ starting quarterback job, but that battle’s over and Jones emerged victorious.

Patriots head coach and GM Bill Belichick saw Jones could perform, no longer needed Newton as insurance, and could clear just over $1.9 million in cap space by moving on from Newton to place Jones as the undisputed team leader at 23.

Jones played under Belichick’s best friend Nick Saban. As Saban said on an HBO documentary about their relationship, Belichick naturally calls him up for the scoop on all his top guys, but surprisingly many coaches don’t do that research.

Belichick knew exactly what he was buying when he drafted Jones and he’s now the natural heir to the Brady throne after a transition year where Newton guided the team to a 7-9 record.

When Newton signed with the Patriots for the league-minimum deal with a potential $7.5 million in incentives, All-Pro Social Justice Warrior and cornerback Richard Sherman called the deal disgusting and disrespectful. This is a part of a mainstream narrative about the suspected oppression of black quarterbacks by NFL franchises that is propagated mostly by click-hungry journalists on Twitter.

The Panthers did Newton no favors by waving him out as trade bait and then cutting him a full week after the start of free agency. This meant teams had spent most of their money and solved most of their big issues by the time he was made available. Newton wasn’t a priority because they didn’t know he’d be available, but the market spoke and Newton performed in a manner that was in accordance with that market value.

By comparison, Jameis Winston, another former #1 overall pick, signed on as a backup for just $1.1 million with the Saints. He and Newton were both re-signed to contracts worth over $5 million in 2021. A one-time starting quarterback and probably the 35thor 36thbest QB in an NFL with 32 teams, Case Keenum is making $6 million per year on a three-year pact with the Browns. Former Colts QB Jacoby Brissett just signed on as a backup in Miami for $5 million.

This race-based narrative is despite the fact that four of the five highest paid quarterbacks in the NFL, and about 70 percent of the league, are black. This is the Colin Kaepernick phenomenon in sports media. After the 2016 season, no one wanted to sign the quarterback who averaged 186 passing yards per game and he turned the the playing of the national anthem into a divisive, angry, and hateful political statement.

While sports journalists like Andrew Brandt, who works for Gary Vee’s sports agency, in particular will lie about his rhetoric and tell us Kaepernick never said it was about the flag, you can see videos and quotes where he states, “I am not going to stand up to show pride in a flag for a country that oppresses black people and people of color.”

That’s not to say his original message against police brutality doesn’t have validity, but it’s since become wrapped into the Black Lives Matter movement. No one wants that guy in their locker room as a backup quarterback and shit-stirrer. We already saw a decade ago how Tim Tebow wasn’t going to stick around as a backup because his playing style didn’t fit most offenses and his celebrity was a distraction, similar to Kaepernick on both accounts.

Cam Newton’s 7-8 season as a starter illustrates a near-peak for this style of aging mobile quarterback with accuracy issues. That is the best-case scenario of what Kaepernick’s career could’ve looked if continued playing past 2016. At worst, he’d have been a backup quarterback who washed out of the league within the following 12 months. I estimated at the time that Kaepernick would’ve gotten a two-year, $4 million per year deal, but he’s since earned far more by exalting himself to a high priesthood within the woke movement through barely coherent activism. It doesn’t stop with Kaepernick or Newton though.

Deshaun Watson, a black quarterback, is facing less scrutiny from sports media for 20+ allegations of sexually deviant, questionable behavior towards masseuses than Drew Brees faced for saying people should stand for the national anthem. The draft coverage of Mac Jones, who had Pro Football Focus’ highest single-season overall grade ever given to a college quarterback at 95.8, was focused more around whether or not his skin color and privilege were related to his rise up draft boards, while Justin Fields’ skin color was the reason why he was falling.

Jones was seen as an illustration of the dumb, red state hicks that sportswriters from New York City and Los Angeles pretend they are better than instead of addressing their own insecurities. Their suspicious that he might be a racist were “confirmed” when they found a picture from when he was around 12, wearing an Obama mask. Making fun of the only president who was worse than George W. Bush and Woodrow Wilson before Joe Biden is verboten. Due to the Obama mask, Mac Jones’ draft week was spent dealing with narratives whose only intentions was to ruin the shine of a moment he worked his entire life for and to potentially harm him financially.

During the 2020 offseason, Newton was a 31-year-old quarterback with a sub-par 59.6 percent career completion percentage. He was heavily reliant on rushing the football and coming off a foot injury that caused him to miss 14 of 16 games in the 2019 season. If he wasn’t going to suddenly become a dynamic passer, his days in the NFL were numbered. While Newton received weird race-based adulation this time last year, he’s now become the bad guy, the person to be torn down because he committed the sin of not obeying the mostly white members of sports media and getting vaccinated.

Sports journalists were rejoicing that they would be able to imply Newton was released because of his vaccination status. Rather than blame the NFL’s insane Covid rules for keeping Newton from three practices during a hotly-contested quarterback race, the media members, who pretend they stand on the side of the oppressed, sided with a multi-national corporation and blamed Newton. His Covid sin was that he traveled to a club-approved medical appointment that required him to leave the New England area. Despite receiving daily tests, all of which were negative, he was unable to return to his team as unvaccinated players are subject to a five-day re-entry process.

Newton did nothing wrong, even took the tests and received negatives, but the sports media members were excited to announce that Belichick made the right decision to get rid of Newton, citing his vaccination status as a key factor, despite all of the valid on-field reasons to do so. Think about this turn of events. Just a few months ago Mac Jones was allegedly a racist who couldn’t lead a diverse locker room. Now that the media has turned their ire towards the unvaccinated, Jones is safe because he’s apparently vaccinated.

Getting the vaccine washes away all of the sins of being white. It’s your “Get Out of Being Called Racist” card. This appeals to the members of sports media who think white guilt is the source of their self-hatred, but who haven’t figured out that it’s their lack of masculinity and leadership skills that make them hate themselves. Just a few months ago, Cam Newton was the good guy, but then the African-American who likely knows what happened in Tuskegee said, “No thanks.” Not only does the vaccine absolve white people of the sin of being white, it allows them to celebrate black people losing their jobs due to discrimination.