A talented basketball squad is unlikely to advance in NCAA tournament. 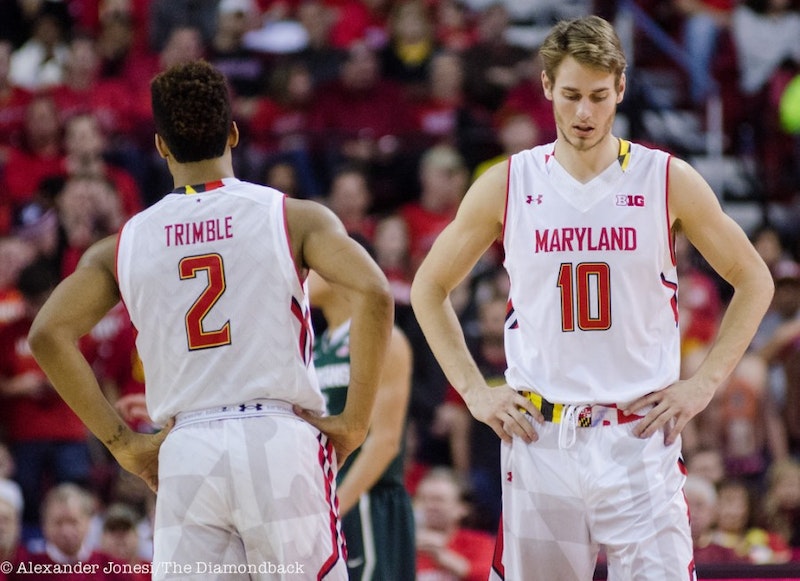 The University of Maryland Men’s Basketball team began this season with such promise. Mark Turgeon’s squad benefitted from the return of star guard Melo Trimble, talented transfers Robert Carter Jr. and Rasheed Sulaimon, and top recruit Diamond Stone. A late season swoon dashed Maryland’s hopes for Big Ten glory. The Terps have packed up all that potential and pre-season praise for a trip to Spokane and the first round of the NCAA tournament. The season that was supposed to return the Terps to the national stage could end on an unfamiliar floor.

A loss in Spokane on Friday to the Jackrabbits of South Dakota State would certainly register as an upset but not a shock. Maryland’s been on a nosedive over the past month. A top five ranking and a shot at the Big Ten championship vanished over the past four weeks as the Terps dropped five of eight games to close the conference schedule. The mounting losses included a blowout at home to unranked Wisconsin and a road loss to woeful Minnesota. Despite a roster chock full of future NBA talent Maryland once again failed to register a road victory against a ranked opponent. The swagger of a national title contender has been traded for the anxiety of potential upset victim.

Turgeon’s lauded for his work as a recruiter but his on-court coaching leaves much to be desired. At this point in the season Turgeon has coached a team with top five talent into a five seed in the NCAA tournament. The Terps have a tendency to get lazy on offense, too often lobbing lackadaisical passes and standing around watching Melo Trimble. Maryland’s recent troubles began with a Trimble shooting slump. The sophomore point guard went just 1-for-14 from the field in that home loss to Wisconsin. He followed up that poor showing with similarly disastrous efforts against Minnesota, Purdue, Michigan and Michigan State.

Turgeon’s lack of structure on offense is cited as one of the reasons for his recruiting success. Turgeon’s “NBA style” offense, which means he lets the players play with minimal play calling from the sideline, is certainly attractive to players. When playing against teams with inferior talent, and with the momentum of the raucous Comcast Center home crowd, the Terps can be one of the most exciting teams to watch in the country. With four shooters that can knock down three-pointers and freshman center Diamond Stone bullying the painted area Maryland frequently makes quick work of under-manned opponents. When taking on teams of similar talent the Terps tend to stagnate on offense. Turgeon typically trusts Trimble to make plays, even during his recent shooting slump.

The Terps have not advanced to a Sweet 16 in the NCAA tournament since 2003. The postseason drought led to mounting pressure on former coach Gary Williams. The Hall of Fame coach retired amid complaints that he wasn’t recruiting enough talented players. Turgeon’s tenure began with a new hope, ultimately dashed by a series of lackluster seasons and player transfers. Turgeon’s Terps finally made the NCAA tournament last season but failed to get past the first weekend. This season was supposed to be different. The Terps were good, and everyone, everywhere, knew it. Until suddenly they weren’t very good. Turgeon isn’t likely to morph into an in-game strategist on par with Gary Williams or Tom Izzo before Friday, meaning the Terps will do as they’ve done all season, let the players play and hope Melo Trimble finds his stroke. Given the concentration of talent and hype anything less than a trip to the Sweet 16 for this Maryland team is a failure.