You can shove your dry heat. 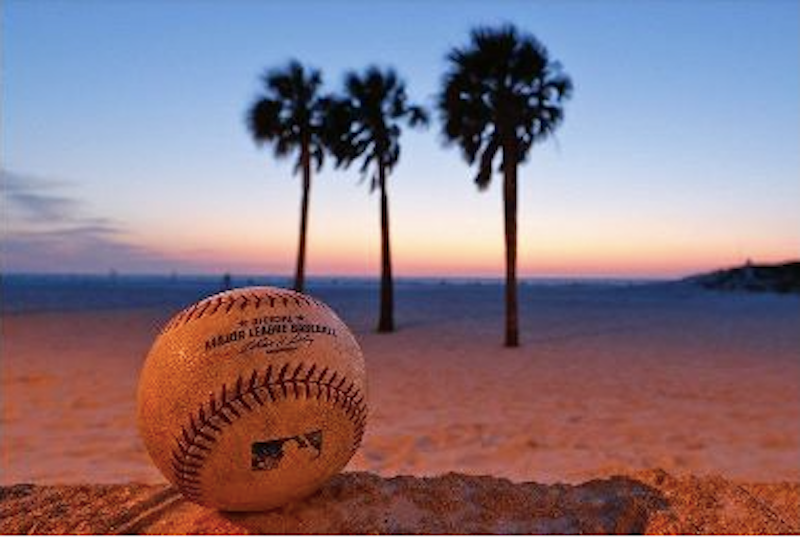 Among baseball's many traditional conflicts—the DH question, what to do with sabermetric interlopers, when is it wrong to call old players and ask them about the new generation—are which Spring Training sites are proper cool and which are bogus. Florida is cool. Arizona is bogus.

So I’m going to Florida this week to prove my theory correct. I’ve been there many times, and my research is infallible. I’ve also been to Arizona. It has more strip malls than Florida, which is something any red-blooded American wouldn’t think was possible. There are no wind-blown homers in Arizona, no Ron Jeremy stand-up comedy strip club appearances, no aborted Space Shuttle launches, no photos at the Gatorland entrance and more importantly no oceans. Golf, Alice Cooper, Frank Lloyd Wright, McCain, sandstorms... that’s your Arizona culture. They hate Daylight Savings Time and Dr. Martin Luther King. All of the MLB franchises that have moved their Spring Training sites from Florida to Arizona have sucked ever since that terrible decision. That means you Cleveland, Cincinnati, Los Angeles Dodgers, Texas Rangers. The Kansas City Royals, okay, that’s one exception. They were stuck at a crappy amusement park outside of Orlando that was kind of a joke anyway so they got some karma from the Baseball Gods.

Historically, Florida crushes Arizona when it comes to Spring Training drama. The Mike Piazza vs. Guillermo Mota fight or flight in Vero Beach was classic, as was the Kevin Brown destruction of Dodgers’ clubhouse toilets, both of which I witnessed live. Going way back, there is the famous player versus manager fight when the Texas Rangers' Lenny Randle assaulted his skipper Frank Lucchesi in a forgotten ballpark in Orlando in 1977. It was a major assault that put Lucchesi in the hospital for four days and saw the player settle out of court with his victim/boss the following December. And most Indians fans will recall the tragic boating accident survived only by Bob Ojeda on Little Lake Nellie in the Orlando suburb of Clermont in 1993. Someone built a new dock extending out onto the lake and when Steve Olin powered his boat across the lake during the night, he and Tim Crews were killed in a terrible collision. This kind of shit does not go down in Arizona, save a car accident or two. And who can forget Tony LaRussa asleep at a Jupiter stoplight in 2007 or Miguel Cabrera toting a scotch bottle up to the cop car during his 2011 traffic stop in St. Lucie County to ask the officers if they knew who he was?

On a more recent note and luckily for the Mets, Yoenis Cespedes’ Car and Driver toy obsession has calmed down a bit and the New York media can instead focus on whether C.C. Sabbathia can resist the alcohol temptations of a Tampa existence. Good luck with that.

MLB was oddly prescient in picking an Interstate road sign motif for the uniform patches worn by every team this March. Spring Training is about travel, it’s about last-minute hotel bookings or sleeping in a rental car in a beach parking lot north of Port Charlotte. It’s about bars at the end of fishing piers north of Sarasota. It’s about a back seat full of souvenir beer cups and temporary bumper stickers glommed from an Ybor City goth club. Greyhound tracks with poorly Xeroxed betting programs with 1970s clip art on the cover. AIA happy hours with smoking bartenders from Pittsburgh serving up garbage-can sized bloody marys pre-game and the Coors Light drinkers have their own beer cozies. Former astronaut bars in Cocoa Beach with fake cave walls and an actual moon rock rolling loose on top of the NCR cash register for crying out loud.

Florida Spring Training is poring over the grossly comprehensive USA Today sports section reports while having a blackened fish sandwich at a beachside dive called Lou’s Blues after you've watched an afternoon game on the Gulf Coast and a night game on the Atlantic Coast and by the way you swam in both bodies of water. And that’s not counting the “B” game you took in at the training facility off the beaten path next to a fruit farm that features alligator wrestlers. This cannot happen in Arizona, where the best thing they've got going is a few random heavy metal clubs and expensive golf. They call it the Cactus League, which denotes pain and can only remind you of Nicolas Cage as a "prickly pear" in Leaving Las Vegas. Florida is the Grapefruit League, which is a beauteous bulbous fruit hangover cure for all that ails you when you use that punk-rock jagged spoon to pry the sections out and maybe have a Pepperidge Farm Milano cookie with your late-morning coffee.

So I’m going to take my family down there this week on St. Patrick's Day hoping we don't have an Irish pilot flying out of Albany Airport. It therefore won't be as wild as my bachelor days at Spring Training, but still, it’s March baseball and the draft beers are cheap and the size of private swimming pools and the senior citizen ushers remember Richie Zisk just like you and everyone old school speaks the same language. The hardcore fans show up at mid-March Spring Training to see the green hats worn on St. Patrick's Day and the Opening Day lineup yawning its way onto the diamond as Opening Day looms within the fortnight. It’s also fun to see the ballplayers and just about everyone else tied up in the beauty of the March Madness NCAA tourney as announcers give score updates over the PA as the palm trees sway and hope springs eternal every five minutes. Cinderella gets sunburned. Again.

Sure, Grapefruit League action has gotten quite fancy now. Following the lead of the Yankees, most quaint tiny bandbox parks along forgotten railroad track egresses up and down the Gulf Coast have turned into mega-entertainment complexes. The Red Sox have Fenway Park porn down in Fort Myers, and the Pirates have expanded their McKechnie Field capacity to include outfield seating and tiki bars, which most Bucco fans refer to as “Teke Bars” in deference to the former closer and now-broadcaster Kent Tekulve, who has come all the way back from a heart transplant for chrissakes. There is also Steve Blass, Pirates World Series hero and now ROOT Sports announcer who was asked on a recent Spring Training broadcast if he was indeed the “mayor of Bradenton” and he confessed that no, he was not, because of “too many run-ins with Bradenton officials” meaning countless DUI stops dismissed by local cops who realized who the famous imbiber was at the last minute.

I’ve had nothing but bliss in Bradenton, including the time I was walking by the media gate at McKechnie Field and Bob Walk, the former Bucco hurler turned sleepy broadcaster, said hello and handed me a complimentary media guide. I’m certain he didn’t remember me interviewing him for a Pittsburgh City Paper article on those premises way back in 1992. Bradenton is full of pleasant baseball memories, from having wings with Jason Kendall at the Bradenton Ale House to chatting with Manny Sanguillen under an umbrella during a rain delay in 1990. Catchers are awesome and so is the trip to Florida. The beauty of this business is that I will be back there this week to check out the new developments, maybe visit a manatee at the local aquarium and in general try to expunge the vile winter absence of baseball from my psyche.