Handicapping the World Cup in a taxi. 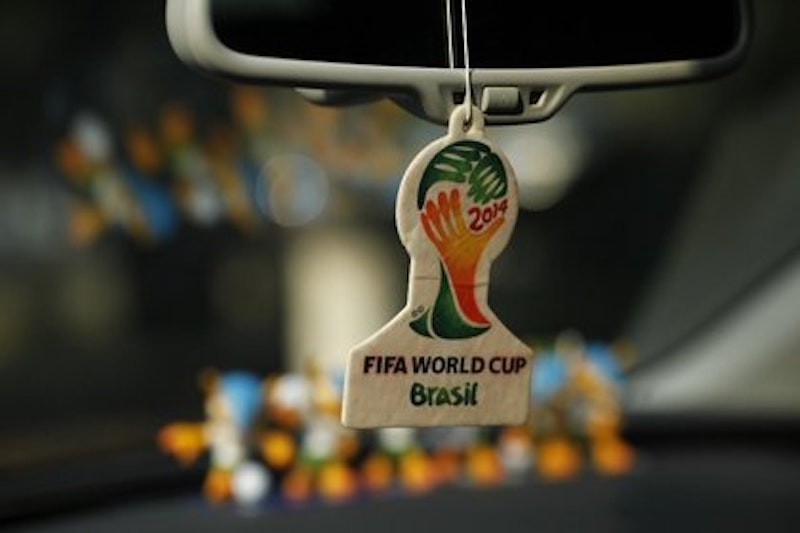 Leading up to the greatest sports tournament of all time, I decided to ask my taxi customers whom they liked to win the 2014 FIFA World Cup. This is my version of “data reporting” favored by the Nate Silver types who have done their best to take the fun out of sports. A typical weekday of fares is quite a variety show given local destinations such as Bard College, the Beekman Arms Inn, Woodstock and the Omega Institute for Holistic Studies. Throw in the Albany airport and Stewart Airport in Newburgh, NY, and stragglers from a few local bars and we have a cross-regional sampler on our hands and in my backseat.

It was stunning during this exercise to discover how many people were not aware that the World Cup tournament was happening this week. So many people have so little time to “follow it” as they say. I always say it is not really a matter of “following it” but living it, debating it and building shrines to influence game outcomes. That’s what being a fan is all about. In this so-called information age we exist in, there’s no excuse for lack of awareness regarding this global sporting event, marketing extravaganza and motherlode of international graft and corruption.

You don’t have to know that U.S. goalkeeper Tim Howard has Tourette’s Syndrome or that England manager Roy Hodgson is frequently targeted in the Limey tabloids thanks to his pronounced lisp. It’s perfectly fine if these nuggets slip away from your fandom-prospecting pan. The personal side stories will emerge, no doubt, thanks to ESPN’s tradition of dismantling team sports into bite-sized individual stars and singular deities that make for easier merchandizing and sponsorship tie-ins. If you get sick of watching ESPN cover the tournament, feel free to flip over to the more-colorful Univision channel for relief and language lessons.

There were 11 victims in my sample size, one for each player on a soccer side. The ambush interview question was: “In the end, which team will hoist the World Cup trophy that resembles a slightly oversized marital aid?”

• David, a Bolivian dude visiting for empowerment conference: “Brazil or Spain.” He bet on the U.S. in a previous tournament and had to shave his head when they were eliminated. He told me this with a full elder Jon Voigt-style ponytail dangling.

• Ben, Amtrak manager, Rhinecliff, NY, station: “England. They have the best fans.” Ben has Polish roots, is a Tottenham fan and therefore is excused.

• Gerard, Haitian driver from Summit Square Taxi: “I don’t know about it. But I do know if the government keeps helping to make soccer big here, America will soon be number one.” Haiti did not qualify, so Gerard is excused.

• Sean Mekas, photographer and son of the late avante garde filmmaker Adolfas Mekas: “The other guy!” Lithuania did not qualify, so Sean is excused.

• Dean Batstone, Canadian troubadour and recording artist: “I’m not really a soccer guy. Ask Paul.” Canada did not qualify, so Dean is excused.

• Paul Antonelle, owner of The Clubhouse recording studio, Rhinebeck, NY, who was with Dean:  “I think Italy will beat England.”

• Richard, an Englishman living in Red Hook, a supporter of Ipswich Town: “Logic says Brazil.” Truly diplomatic, he said he was also rooting for England and the U.S. Definitely the most knowledgeable soccer fan I’ve had in my taxi, which explains his success coaching in the Red Hook rec soccer program.

• Australian woman named Toni attending a Mindfulness Workshop at Omega Institute for Holistic Studies: “Someone today told me to look out for Spain.” I told her the Socceroos might not get screwed by Italy this time around. She laughed and said, “Pick me up at 5:30 tomorrow morning.”

• Bruce Washburn, Rhinebeck town board member, former IBM exec and one of the founders of Rhinebeck’s Rec Soccer League: “For some reason I like Ghana and I don’t know why.”

• “That is an excellent question,” said Roger Berkowitz, academic director of The Hannah Arendt Center for Politics and Humanities at Bard College. “It does look like Argentina has put together an amazing team with Messi.” I think Ms. Arendt would have pulled for Germany.

• “I don’t know, but I hope it doesn’t turn out to be a big mess for Brazil,” said Evelyn, a Caribbean hotelier with a house in Clinton, NY. Turns out she is related to Ivan Lendl. Who does he like in the World Cup? Evelyn said Ivan is more into golf now. Lendl’s home country, the Czech Republic, did not qualify for the tourney. He became an American citizen in 1992, so we automatically throw his weight behind the U.S. boys. So we’ve got that going for us, which is nice.