The Quiet Beauty of the Winter Olympics

It's the little things I notice. 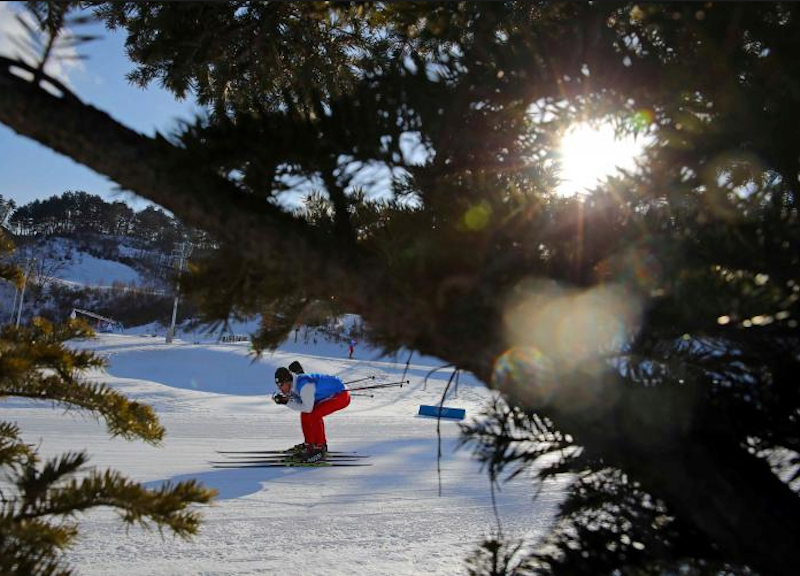 As I write, I’ve got the Olympics on TV, the sound muted. CBC’s showing downhill skiing. It’s nighttime here in Montreal, in South Korea it’s bright and sunny, light shining hard off packed snow, puffs of white flour marking a skier’s sharp turns. The camera tilts to keep the athletes in view, but sometimes we get cutaways to see the course from a higher perspective: bare-branched trees thronging up to fences of red netting, other hills in the distance sloping away, sugar-dusted valleys between them seen in the clarity of winter air.

Those shots are why I have the TV on, more so than the competition. The race makes for a nice subplot: sports have the feel of breaking news with none of the pressure or significance, a live event at which something is happening but nobody dies. It’s the view of nature, the sense of scale, that gives me something worth looking at, rather than my computer screen. It’s something that I don’t have to think about. I don’t even have to be bothered with the low-level mental activity of joining cut-to-cut to make sense in my head; the visuals are repetitive enough I know what’s coming next. I can stare at the screen and meditate.

There’s something about the snow-clad countryside I can relate to, even while where I live the snow melts away in a warmer-than-average February. Korea at least has scenery I understand. In Pyeongchang, the morning light falls at a sharp angle, picking out every fold and ripple in the snow-covered ground. When a skier falls and wipes out, kicking up a blizzard, it’s a bright colorless explosion that traps light in a haze of wind-plucked particles, a matrix that in slow-motion seeks distantly for a shape.

The Winter Olympics aren’t the only event I’ll throw on TV for the sake of a bit of eye-pleasing movement. I’ll do the same with the World Cup later this year. But the winter games have a special soothing quality: all that white, all that light bouncing off solid-state water.

Skiing, snowboarding, these sports in particular have a visual power from their backdrops: the scope of their backgrounds. The luge and bobsled and skeleton have a different sense of speed, athletes seen from up close whipping by on a narrow track, a kind of half-inside, half-outside structure that makes for another kind of visual complexity. Conversely, arena-bound sports like speed-skating and figure skating aren’t anywhere near as engaging to me, though curling has a hypnotic appeal and hockey is—hockey is hockey, not the same thing, because that sport I watch for itself.

The Summer Olympics don’t hit me the same way. Sailing sometimes has an interesting backdrop, yes, and rowing and the marathon and cross-country cycling events. But summer mostly seems a lot of visually dull track-and-field, a lot of things inside stadiums. Winter Olympics rules require any sport to be performed only on ice or snow—though there’s some talk of changing that rule to “should be practiced only during the winter months,” allowing winter running and cyclocross to be added to the games—and so these Olympics do feel a part of their season, linked to the truest signs of winter. They’re involved with the winter world, with leafless trees and slate-blue skies. With a world so cold you can taste it in the images alone, can smell the ice through your TV screen.

It’d be easy to say that this appeals to something northern in the soul. Easy, but dubious; I’ve only ever had the one soul that I know of, so cannot rightly say if it’s more northerly than others. Simply, this appeals to memory, half-buried childhood remembrances of skiing in the woods, of a school outing to a ski hill. To all the white landscapes I have known and internalized.

It’s the land that matters. The Winter Olympics are often more about place than the summer games, I feel, because the hosting venues are smaller. Pyeongchang, hosting these games, isn’t a city but a county with just over 43,000 inhabitants; Sochi has a bit more than 350,000; even venues like Vancouver, Turin, and Salt Lake City aren’t the primary metropoli of their host countries, not like London, Rio, or Beijing. See a view from high above showing the Winter Olympic facilities and the venues stand out, landmarks in their setting: sports are linked to the community. The environment shapes these games in a way that’s not true of the Summer Olympics.

Sport creates a world of images. That’s not something often written about, and when the images of sport are discussed they’re presented strictly as portraits—depictions of athletes, of striving, of the agon. The Winter Olympics remind me that every portrait can also be imagined as a detail from a landscape. That surrounding the noise, conflict and the struggle to be faster, higher, stronger, there’s a much greater world that is still, profound, and stronger than can be imagined.