Rhodes’ “hard times” monologue about working-class masculinity is among the most poignant in wrestling history. 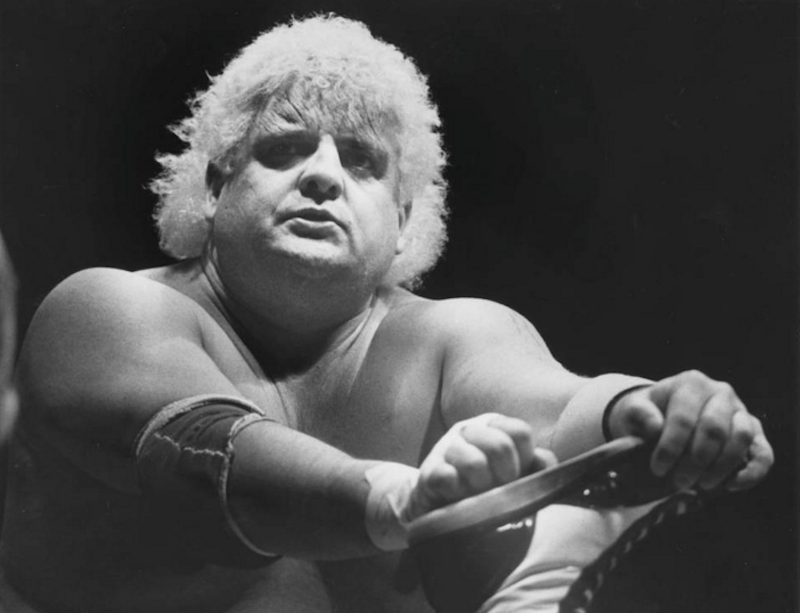 Watch the “hard times” interview that Dusty Rhodes cut in preparation for a Starrcade match with Ric Flair. I make a modest living researching and writing about wrestling, and I love the sport with my whole heart, yet in all honesty so little of it is transcendent and so much of it is beneath your contempt. But this one will have you operating with a blown mind, mark my words.

Queue up Dusty’s astonishing performance and then imagine you're watching it from the perspective of a little kid in 1989 watching a VHS tape from 1985. It starts slow. You're focusing on the man's purple scarred-up forehead, his marceled hair, his tea shade glasses, his pink shirt with the neck button that won't close around his capacious double chin… how could you do anything but direct all of your attention to "The American Dream" Dusty Rhodes?

You're transfixed, under Rhodes' spell. For the first seven years of your life, you'd watched a fat Dusty Rhodes-looking father figure scream and shout in your house, so this kind of performance fits around your PTSD-afflicted brainpan like an old shoe, an old jock strap, an old pair of jeggings or some other tortured simile. Then Rhodes’ promo starts to build. At the minute mark, he bellows there’s "no honor among thieves." Your father was probably saying something similar while his businesses, and by extension his life, crumbled around him. On we go, as Rhodes starts with this "hard times" stuff. Yes indeed, you know from "hard times." Your life is nothing but hard times, so that's très relatable.

"Hard times are when a man has worked in a job for 30 years, and then they kick you in the butt, give you a watch, and say a computer took yo place, daddy," Rhodes laments. Then comes a flirtatious taunt: "I admit I don't look like the athlete of the day is supposed to look… my belly's just a little big, my heinie's just a little big, but brother I'm bad. There were two bad people. One was John Wayne, and the other is right here." Holy cow. There's an appealing toughness to this boasting, something that makes it seem like more than just empty blather directed at the marks who contentedly paid to see the show while Rhodes got well-compensated to be the show. In any case, he was worth every penny.

Two minutes into the interview, Rhodes extends his hand to the screen and tells you your hand is touching his hand for this "gathering of the biggest body of people in the universe." It doesn't make a lick of sense, yet it's undeniably brilliant. Dusty Rhodes is the man of the hour, the man with the power, too sweet to be sour, etc. He could get away with reading the phone book and you'd still adore him. He has to vanquish Ric Flair and get his job back, even though fate and the Jim Crockett Promotions booking team have decreed he never really will... at least not in an honest 1-2-3 manner that prevents Flair from later being re-awarded the belt on a technicality (the famed “Dusty finish” that doesn’t finish anything) and Rhodes redoubling his efforts to win it.

Now comes Rhodes’ coda: "I'm proud of you and thank God I have you." Are you, Dusty? Are you really? Man, that means the world to me. I hope all your American dreams come true.