The Philosophical Conundrum of the Team Formerly Known as the Redskins

Will I still be a fan when the team becomes the Social Justice Warriors? 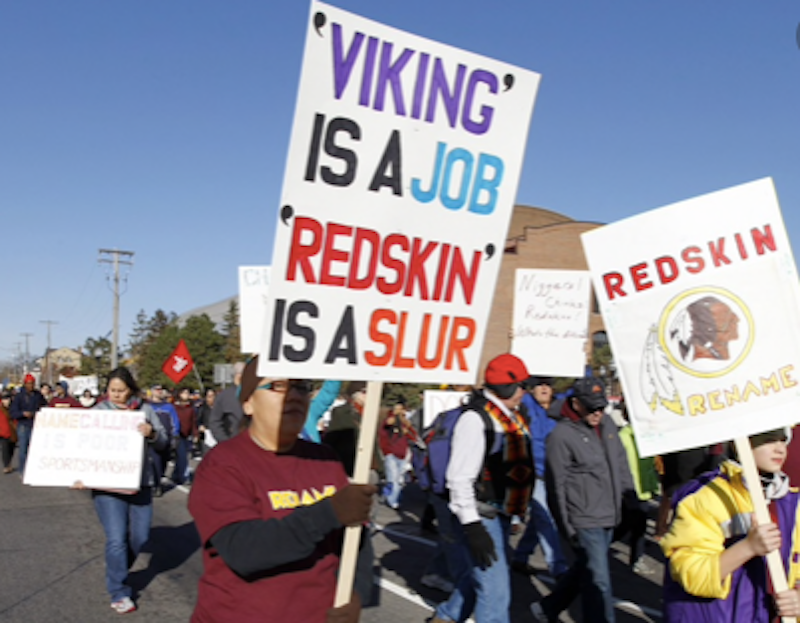 "Crispy was rooting for the Redskins before he could talk," my father Frank liked to tell his friends circa 1968, when I was 10. "He comes by it natural," as he also put it, and I have a picture of Frank at a game at old Griffith Stadium in DC with his father, around 1938, when he was himself 10. The former Boston Braves were in their second season in DC; my forebears look happy.

My father conveyed early and often to his son that Skins quarterback/defensive back/kicker Sammy Baugh, whom he had seen play many times, was the greatest football player who ever lived. Little me favored the Sonny Jurgensen as the greatest ever, despite his lack of field goals. My heroes were Bobby Mitchell, Charlie Taylor and Jerry Smith. I had a pet named “Sonny Gerbilson.” The first poem I ever wrote, "Pat Richter Kicks," was an ode to the team's punter. I became a peacenik hippie, and still watched Redskins games. I became a punk anarchist, and secretly sported Skins merch on Sundays. I moved out of the DC area in 1981 and never moved back, but kept on rooting, through Joe Gibbs' dynasties and Dan Snyder's permanent rebuilding.

Gradually, the Redskins have become the team that dare not speak its name. The first time I fully realized this I was walking across the Maryland Institute College of Art in Baltimore around 2000 with a Skins cap on; a student who looked like she might’ve had some native roots looked right at my head and said "pig." I tried to explain that I rooted for the Redskins before I could talk, but she didn't regard that as an excuse; she wasn't impressed by the names “Sammy Baugh" and "Sonny Jurgensen." My fanhood became evermore closeted after that, but persisted.

Even though my ancestors and I fanned the team under the name “Redskins,” I’m not opposed to a name change. It’ll be a relief, and though it may leave me with a closet full of white supremacist merchandise, it'll allow me to wear a cap on campus again, if I’m so inclined. But will I? I'm wondering whether this is the change that, despite the fact that I'm not opposed, brings the team my family rooted for over generations to an end. I'm wondering whether I'll lose that last thread of connection and become an Eagles fan or something, or just stick to the English Premiere League for my “football.” I'm wonder whether "the same" team can persist through this change.

Sports franchises present vivid examples of the philosophical question known as "the conditions of identity over time." For example, I’m the same person who had a pet named Sonny Gerbilson. But I don't look much like that 10-year-old boy. I don't think much like him either. Perhaps every cell in "my" body has been replaced in the interim. Am I the same person? The first paragraph of this story, and even that last sentence, presuppose that I am. But what accounts for that?

The Washington NFL team, obviously, consists of entirely different players and coaches than it did even 20 years ago. "The" team has changed ownership and uniform designs several times. It has moved from Griffith Stadium to RFK to FedEx Field. By hypothesis, "the same" team used to be in Boston and was called the "Braves." The only thing I can think of that hasn't changed completely is the color scheme, though that's something that's hardly unique: no one can really tell the "burgundy" from Boston College Eagles' maroon, for example.

Fanhood can persist through all sorts of changes, with the possible exception of relocation, though I know people in Baltimore who never stopped rooting for the Colts, somehow. The Baltimore situation raises nice complexities. Which present team, we might ask, is the Cleveland Browns? (Wait, is "Browns" an ethnic slur?) The Browns "moved" to Baltimore and became the Ravens in 1996. By agreement, they left their records behind (all-time best punting average, e.g.) and bequeathed them to the "new" expansion Browns, who began play in 1999. Did the Browns of Paul Brown and Jim Brown cease to exist forever? Did it move to Baltimore and become the present-day Ravens? Did it pop out of existence for a couple of years and then come to exist again, taking up its previous history? Or did it split in two by fission? The conditions on identity on persons are complex and difficult, but the conditions of identity on sports teams are flexible, ambiguous, and complex. Which team is which turns out to be a real stumper. What's a fan to do?

John Locke and many philosophers who followed him said that what accounted for personal identity over time was a stream of memory; it's because I remember that 10-year-old kid from the inside that I’m the same person as he was. But the Cleveland Browns' memories (their record book, their ring of honor, and so on) seemed to get transferred from one team to another. Locke imagined cases like this too: what if I woke up in someone else's body but with my memories? I'd then be me in another body, Locke thought. So it’s likely that he'd identify the team currently called the "Cleveland Browns," as opposed to the current "Baltimore Ravens," as the team that was called the "Cleveland Browns" in 1970.

I’m profoundly confusing even myself at this point. I'm worried here about names, not records, and though my name feels pretty central to my identity, I suppose I could change it to Sebastiano del Piombo and still remain myself. My 95-year-old mom, who was never a Redskins fan, might still regard me as her son after a name change. Probably “I” could undergo a gender reassignment, a conversion to Islam, and a series of cosmetic surgeries and she'd still think of me as her child. She might get irritated and detached, though, or just grow puzzled. The emotional connections might fray a bit.

The claim that the Redskins should be or are in the process of changing their name itself presupposes that will be the very same team before and after the change (from "Washington Redskins" to "Social Justice Warriors" or whatever it may be). But I know that Snyder has worried about this for a long time with regard to his bottom line: will the name change fray the emotional connection even further than it has already been frayed by his own "questionable" management?

This isn't a world-shaking matter, I realize, and yet for me it's bewildering both as a matter of family tradition and a philosophical conundrum.