The Night the Lakers Nearly Died in a Plane Crash

They tried flying above the snow but without the generator they’d lost cabin pressurization. 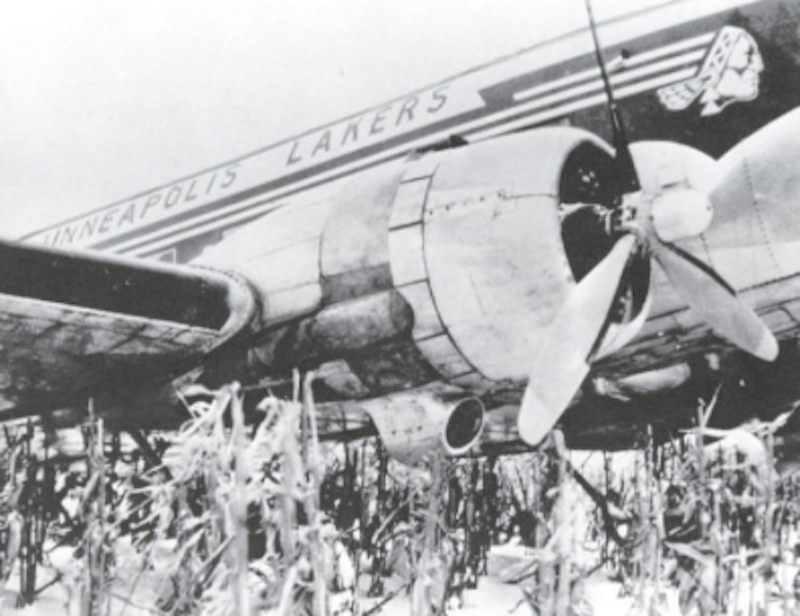 When Kobe Bryant died in a helicopter crash this past January, it was a reminder of other athletes who’ve been victims of air travel accidents. Roberto Clemente was killed in a 1972 plane crash while delivering aid to Nicaragua. In 1979, Yankees catcher Thurman Munson died in a small plane crash at an airport in Ohio. Knute Rockne perished in a 1931 plane crash in Kansas. In 1977, all but one member of the University of Evansville basketball team were killed in an Indiana plane crash.

In 1960, the Minneapolis Lakers almost joined the annals of tragic plane accidents. On January 18, the team was flying back home from a game in St. Louis in a DC3. The plane was delayed three hours because of a severe storm. At 9:30 p.m., pilot Vern Ullman was given clearance to take off. Right away the flight was bumpy. The team was used to this. DC-3’s were prop planes and not known for comfort.

About 15 minutes into the flight the heater and the cabin lights went out. The players tried continuing the card game with flashlights but the turbulence became too rough. Baylor was a rookie on the team. He’d just scored 43 points in a loss against the Hawks. “The lights went out and it got cold,” he said. “And for a while the pilot didn’t say anything. And finally everybody wanted to know what was going on.”

In the cockpit, the two pilots found themselves flying without navigation capabilities. The plane’s generators had blown after takeoff. They didn’t know where they were, how high, how fast they were going or how much fuel they had. They lost radio contact and had no interior lights. Then they flew into a snowstorm and the window defrost didn’t work. The pilots donned goggles and stuck their heads out the side windows to see. Co-pilot Howard Gifford squeegeed away the ice on the window by hand. He ended up with frostbite over half his face.

They didn’t have the option of returning to St. Louis since the radio wasn’t working and air traffic was too heavy. Using a compass, they pointed the plane toward Minneapolis. They tried flying above the snow but without the generator they’d lost cabin pressurization. This meant the air would become thinner and the passengers might pass out.

Six adults and four children accompanied the team. Coach Jim Pollard and his nine players tried to stay calm and warm. Baylor hated flying. Known by his teammates as “Motormouth,” he became quiet as he fought off waves of nausea. Tommy Hawkins noticed ice building on the wings and windows. He touched the cabin floor and it was felt frozen. Hawkins asked his teammate Bob “Slick” Leonard, “Do you think we’re gonna die?” Leonard replied, “Naw, we’re gonna be fine.”

One of the two engines started sputtering. Co-Pilot Gifford informed the passengers of the situation. “We have no lights, no generator, no radio and we’re lost,” he said. He added they didn’t even know what state they were over and were running low on fuel.

Ullman descended to about 500 feet to get below the storm. He noticed lights below, probably from a small town. He shined his flashlight out the cockpit window hoping someone at a nearby airport might turn on runway lights. This didn’t work. He flew lower and saw a cornfield. He told Gifford this was their best chance for a safe landing. Gifford ran the idea by the team.

Baylor added, “Just put it down anywhere, I don’t care.”Baylor wrapped himself in a blanket and lay down in the aisle. “If we’re going to crash I might as well go comfortably,” he said.

Ullman circled, looking for the best spot to land. He noticed a water tower that read Carroll, Iowa. He followed the headlights of a car on the highway below. Twice he had to pull up to avoid high-tension wires. As he descended to about 150 feet, he cut the engine and aimed for a wide swath of cornstalks covered in snow. He held his breath and the plane plunged into the corn, bouncing three of four times then coming to a stop.

Inside the cabin the 20 passengers were silent. Then everyone erupted in cheers and applause. They jumped off the plane and started throwing snowballs at each other like little kids. Then they began a one-mile hike through the snow toward the highway. Bob Leonard said that about 75 yards ahead of the plane, “there was a dropoff like you wouldn’t believe. That plane would have gone down that gorge and probably exploded.”

The first person to greet the players was the local undertaker Joe Twit. “I’m not shucking you,” he told the players. “I thought I had some business tonight.” Local residents drove the passengers into town. They stayed the night at a senior retirement hotel. The place had a tiny bar with one bottle of Seagram’s Whiskey. The players opened the bottle and downed it in minutes.

The following year, 1961, Lakers owner Bob Short decided to move the team to Los Angeles. He never specifically mentioned the plane crash, but did say everyone was tired of the snow.