They had great shooters, an overpowering center, tenacious defense and a lethal fast break. 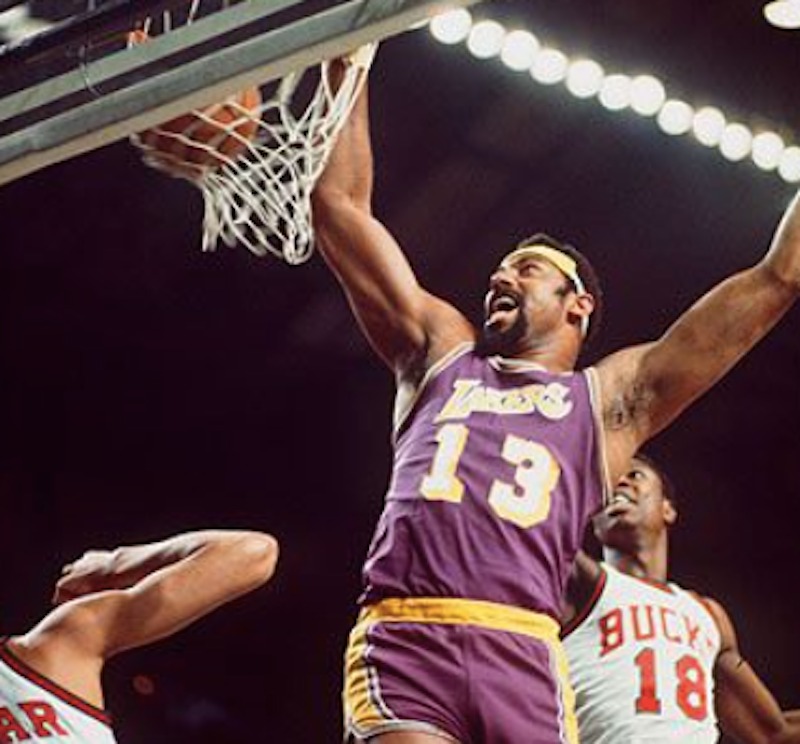 The streak began on an ominous note. It was November 5, 1971 and Coach Bill Sharman approached Elgin Baylor with an ultimatum. The Los Angeles Lakers were 6-3 but Sharman was disappointed in the team’s play. He wanted a fast-break style and Baylor was slowing down the offense.

Sharman told Baylor, “Elgin, I feel terrible, but I know you have a bad leg… so I thought I’d bring you in as a substitute.” Baylor replied, “I don’t want to be a substitute and I’m still injured so it’s best that I retire.” Just like that Baylor, an 11-time all-star who debuted with the Minneapolis Lakers, walked into the sunset.

That night the Lakers beat the Washington Bullets 110-106. This would be the first of 33 consecutive victories, the greatest win streak in sports history (due respect to the Harlem Globetrotters). Two superstars led the way, Wilt Chamberlain and Jerry West.

Chamberlain was larger than life. He stood 7’ 1”, drove big cars, owned big dogs and during the ’72 season he built a colossal mansion in the Santa Monica Mountains. The house had a 14-foot tall front door, a five-story living room and a 72-foot bed with covers sewn from the nose fur of 17,000 wolves. Presumably he used the bed with some of the 20,000 women he claimed to have slept with in his autobiography The View From Above.

Chamberlain was a Nixon-loving Republican who, when asked to name his astrological sign said, “the dollar sign.” He once scored 100 points in a game and in 1962 he averaged 50 points and 22 rebounds. His nickname was the “big dipper” but teammates called him “the big musty” due to his rank, sweat-stained gym clothes he wore on successive days.

Jerry West was quiet and humble. He was a deadeye shooter and lockdown defender. His nicknames included “Mister Clutch” and “Zeke From Cabin Creek,” a nod to his upbringing in West Virginia. He later became known as “the logo” when the NBA patterned their emblem after his likeness.

As West relates in his book West By West, he battled lifelong depression stemming from abuse at the hands of his father. He kept a shotgun under his bed and threatened to use it on his dad unless the abuse stopped. Basketball was West’s escape. He was intensely competitive and driven by a fear of failure. In 1969 he became the only losing player in NBA finals history to win series MVP.

West’s backcourt mate was Gail Goodrich, a member of John Wooden’s first two UCLA title teams. Goodrich was a left-handed scoring machine nicknamed “Stumpy” due to his height and short legs. Though not a great athlete (he couldn’t dunk) he and West became the most feared guard tandem in the league.

Harold “Happy” Hairston played power forward. He was a scrappy, hard-nosed rebounder who averaged 13 points and 13 rebounds for the season. He and Chamberlain comprised an intimidating frontcourt. After his 11-year career ended, Hairston became an actor appearing in Conan the Barbarian and Brian’s Song as well as the television shows Columbo, Sanford and Sonand Happy Days.

Baylor’s replacement at small forward was Jim McMillian. A second-year player from Columbia, McMillian was chunky and given the nickname “butterball.” He was a great shooter and loved to run.

The Lakers recent history was fraught with disappointment. They lost six times to the Boston Celtics in the 1960s, including 1969 when they lost Game Seven in Los Angeles despite being heavy favorites. In 1970, they made it to the finals but lost to the New York Knicks. As the ‘72 season began, Chamberlain was 35 and West was 33. The team was considered too old and too cursed.

The Lakers’ owner was an arrogant Canadian named Jack Kent Cooke. Hot Rod Hundley, an ex-Laker, called Cooke “the number one asshole who ever lived.” Lakers announcer Chick Hearn said Cooke is “the only man I’ve ever known who would like to die in his own arms.” Cooke offered the Lakers coaching job to John Wooden. When Wooden politely turned him down, Cooke kicked Wooden out of the house.

It took two ex-Celtics to mold the Lakers into champions. Cooke hired Bill Sharman as head coach and K.C. Jones, as assistant. Jerry West wasn’t happy. He’d experienced so much misery at the hands of the Celtics, he didn’t want to be coached by them. “It drove him nuts,” teammate Pat Riley said.

Sharman proved to be an inspired choice. He was a physical fitness addict and held brutal practices designed to make the Lakers the best-conditioned team in the league. He wanted to speed up the offense and focus on fast break points. At pre-season camp in Honolulu, workouts were so relentless West told reporters, “I went to Hawaii with a suntan and came back without it.”

Sharman appointed Chamberlain as captain. He wanted his star center to de-emphasize his scoring and focus on rebounds and defense. Sharman also shifted West from shooting guard to point guard. West wasn’t a great dribbler but that year he’d lead the league in assists at 9.7 a game.

Sharman became the first coach to implement game-day practices. Chamberlain hated practice. He was an insomniac who often didn’t get to sleep until sunrise. He told Sharman, “You can have me in the morning or the evening. But not both.” Chick Hearn advised Sharman to call the practices “shootarounds.” Chamberlain reluctantly agreed to participate.

On November 14, the Lakers defeated the Celtics to win their eighth consecutive game. Chamberlain had an odd triple-double with 31 rebounds, 10 assists, 13 blocks despite only three points. A week later the Lakers played the ’71 champion Milwaukee Bucks and their two stars Kareem Abdul-Jabbar and Oscar Robertson. Abdul-Jabbar scored 39 points but West, Goodrich and McMillian combined for 74 points leading the Lakers to their 11thstraight win. At halftime, Elgin Baylor’s jersey was retired.

In early December, Sharman lost his voice. Doctors diagnosed temporary laryngitis but his voice would never return. He began using a small megaphone to call out instructions at practice. On December 10, the Lakers played the Phoenix Suns. Connie Hawkins of the Suns missed a shot at the buzzer to win the game. The Lakers prevailed in overtime 126-117 tying the NBA record of 20 straight wins. Two nights later they set the record outright by thumping the Atlanta Hawks.

The Lakers appeared invincible. They had great shooters, an overpowering center, tenacious defense and a lethal fast break. Their bench was underrated. Guard Flynn Robinson provided instant offense and Pat Riley played the role of irritant.

On January 7, they demolished the Atlanta Hawks and their star Pete Maravich by 44 points for their 33rd straight win. Awaiting them in Milwaukee were the Bucks who wanted revenge from their early season loss.

The Bucks stormed to an early lead but the Lakers fought back. The game was tied 71-71 in the third quarter. That’s when Happy Hairston lost his footing and fell into Abdul-Jabbar’s legs. Abdul-Jabbar rose and slugged Hairston in the face nearly knocking him out. He was assessed a technical foul but allowed to stay in the game. (Old school NBA games were crazy tough.) Abdul-Jabbar became a man possessed. He finished with 39 points and 20 rebounds and the Bucks won 120-104, ending the Lakers winning streak at 33 games.

The Lakers ended the season with a 69-13 record. Their winning streak would be meaningless unless they won the title. Late in the season, West fell into a shooting slump. Then Chamberlain fractured a finger making it difficult to catch and hold the ball. Suddenly, the Lakers appeared vulnerable.

They easily beat the Chicago Bulls in the first round of the playoffs four games to none. Next up were the powerful Bucks. Milwaukee destroyed the Lakers in Game 1 in Los Angeles by 21 points. If the Lakers lost the next game, their season was likely over.

The teams split the next two games in Milwaukee then the Lakers blew out the Bucks by 25 in Game 5. Game 6 was back in Milwaukee. Chamberlain called a players-only meeting before the game. He reminded teammates that he was always a better player than Bill Russell, but Russell’s Celtics defeated Wilt’s teams. Now, he was facing a player better than him in Abdul-Jabbar. It’d take a team effort for the Lakers to win.

Inspired by Chamberlain’s words, the Lakers outlasted the Bucks. Abdul-Jabbar was transcendent with 37 points and 25 rebounds. But Chamberlain held his own with 20 points, 24 rebounds and 10 blocked shots including five blocks of Abdul-Jabbar’s skyhook. The Lakers moved on to face the New York Knicks in the finals.

As in the previous series, the Lakers were blown out in Game 1. West shot 3 for 15 with 12 points. In Game 2, West was 6 for 21 but the Lakers won 106-92. Near the end of Game 2, Knicks forward Dave DeBusschere was injured. The Knicks were already missing center Willis Reed due to injury. The Lakers took advantage and easily won Game 3 in New York. Game 4 was back and forth. Late in the game, Chamberlain fell on his wrist. He felt pain but was able to continue. West missed a potential game winner at the buzzer. The Lakers won in overtime taking a commanding 3-1 series lead.

Back in Los Angeles, Chamberlain’s wrist was severely swollen. X-rays revealed a fracture. His arm was put in a cast and he was ruled out for Game 5. Memories of the ‘69 finals plagued Chamberlain. That year in Game 7, he tore a knee ligament and came out of the game. His coach Fred Schaus called him soft and Bill Russell said that unless Wilt had a broken back he should’ve continued playing.

Chamberlain didn’t want to repeat history. Relying on icepacks and anti-inflammatory injections, he dominated Game 5. He stat line included 24 points, 29 rebounds, 8 blocked shots and 8 assists. The Lakers won 114-100 and earned their first title in Los Angeles. Jerry West was finally a champion. “I played terrible basketball in the finals and we won… the team overcame me. Maybe that’s what a team is all about,” West said. The only thing that saddened him was “the conspicuous absence of Elgin Baylor.”