Golf in the Garden

The Weight of crashing the Woodstock Open. 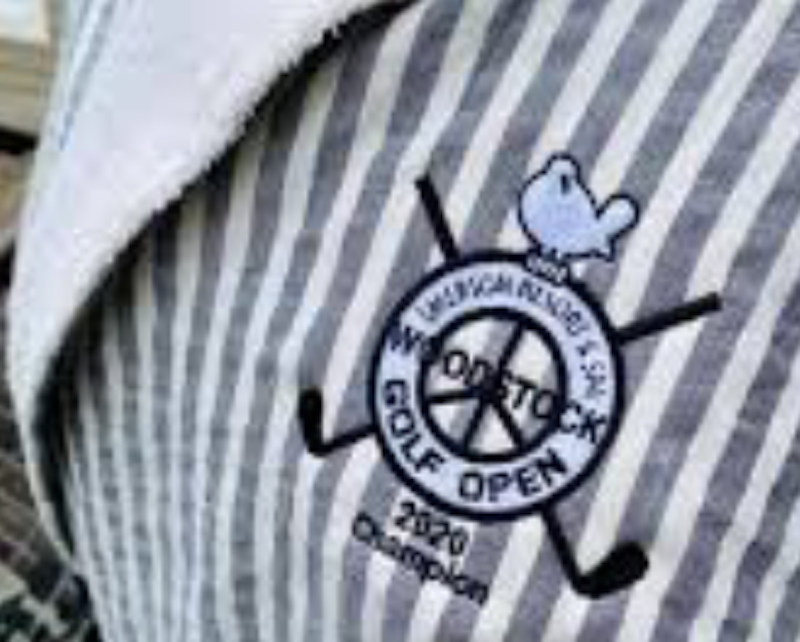 Attending a live sporting event is old-fashioned now, so on a recent Monday it was time to get up early and drive to the Emerson Resort & Spa Woodstock Open golf tournament. It’s the 85th year for the fixture, known to be the oldest pro and amateur golf competition in the U.S. The Northeastern New York PGA event draws mostly club pros from various public and private golf facilities throughout the Hudson Valley. This year, 61 players descended on the 91-year-old nine-hole course in the Ulster County artist colony famous for carrying the name of the 1969 outdoor music festival. It’s shoehorned into the eastern fringe of the village at the intersection of Route 375 (officially Levon Helm Memorial Boulevard) and state route 212 that connects Woodstock to Saugerties a few miles to the east. Towering over it all is the aptly named Overlook Mountain, 3140 feet above sea level representing the Catskills quite well.

The Woodstock Open is a one-day tournament, so there are no trunk slammers (players who don’t make the cut and are eliminated early during weekend competitions). The aforementioned Levon Helm’s residence is just over a mile up the hill on Plochmann Lane and is currently for sale, neighboring the famous Midnight Ramble Performance Barn and Studio. The Woodstock Golf Club isn’t exactly Bushwood from Caddyshack. It’s a mini-compound of three modest white buildings including a restaurant (now closed because of COVID-19) built over an old mill wheel in the Saw Kill, the creek snaking its way through Woodstock.

This golf tournament was never a big spectator draw, but this year entrants were instructed to discourage fan or family attendance of any kind. I had a wander through the cramped grounds the Sunday before the tourney, and host pro Chris Sanger said they “usually” have spectators, but not this year. He then sold me a royal blue $21 Woodstock Golf Club ballcap. Like everything involving the village of Woodstock “brand,” the club logo is topped by the white peace dove, the one designed by Arnold Skolnick for the festival back in 1969 when he famously perched it on the neck of a guitar. Unless it’s a big-time tournament with beverage tents and roped off galleys, golf is better seen on television. The “stars” of the Woodstock Open weren’t scheduled to tee off until mid-day, which, on the punishingly humid Monday, was almost a death sentence. When they pulled into the course parking lot, they were already feeling about half past dead.

I was determined to check out the eight a.m. start from the first tee. The pleasant Catskill scenery unfolds on a winding back road without another car in sight. The approach to route 212 is a photographer’s gold mine at 7:30 a.m. in late July, especially as the famous Zena Cornfield appears in all of its emerald glory in the foreground of Overlook Mountain. I assume it’s tradition for the “host pro” to be the first player to tee off, so it was Sanger and his caddy strolling across a rickety bridge over the almost dried up Saw Kill to get to the first tee. He had the tanned, lanky, pastel-wearing confidence that would be the look of the day. No cart for him.

As I parked the radio announced a heat advisory for the entire county. I strolled toward the shady area at the foot of the bridge and took a load off. Wearing a mask and finding a nice, black steel patio table and chair, very few officials noticed me. I had a nice vantage of the first tee to my right, and there in front of me on a chair not in the shade, was Dick McDermott, the 80-year-old tournament chairman and historian. He greeted each player as they arrived, and the first group out had pleasant conditions. Dick was overdressed for Woodstock standards in his blue blazer, khaki trousers, dress shirt and necktie. Just a few blocks away on Tinker St., the tie-dyed universe expands into an abundance of head shops and rock ‘n’ roll memorabilia stores. The village still gets a steady stream of tourists hungry for hippie culture despite the fact the 1969 festival eventually relocated to a site in Bethel, NY, and went down one county over and some 58 miles west of the Woodstock Golf Club. The village has a bad taco joint and new cafes aimed at the Millennial palate with three types of avocado toast and several kale smoothies at $10 a pop. Woodstock’s Sunday drum circle still happens on the village green.

As Sanger struck a perfect metal wood off the first tee to get the tournament underway, what unfolded in the village so emblematic of the great counterculture was an afternoon of somewhat indulgent weekday white privilege. A double-bogey on the par-three ninth hole would prove costly for the local pro. Sanger finished in a five-way tie for third with a two-under round of 68, earning $710 from the purse.

Players continued to trickle in, masks over faces and iced coffees and Gatorades in hand at mid-morning. McDermott welcomed them with a command to “play well.” I figured the Crazy Chester Award should go to the dude decked out in some type of pink camouflage pantaloons with a pink shirt and pink hat. The rest of the field was the bland attire seen at every lesser golf tournament several strata beneath the televised wild fashions of big-time pros like Rickie Fowler or John Daly.

As the morning clicked away with metal wood sounds, the traffic was picking up on the highways that are only a few feet away from the first tee. The announcer from the pro shop deck was suddenly hard to hear. I spotted a caddy vaping on the practice putting green near the men’s locker room building. As the golfers walk in from the parking lot there’s a fair amount of spitting before they put on their face coverings. Sunscreen is slathered. The monogramed golf bags were bobbing past me at a steady pace. A black cat emerged from an open door of the closed restaurant space. I was hoping to revisit the bar in there where my friend Jessica served David Bowie, a part-time Woodstock area resident, a glass of red wine back in the fall of 2013. She took a picture of the glass and napkin. A worker inside had told me previously the fate of the bar/restaurant space (open to the public, the rest of the club is private) is indeed up in the air.

My occasional golf game is usually at a scrappy par-three executive course in Kingston, N.Y., which also features batting cages, go-kart racing and soft-serve ice cream. As the announcer read the names of each player approaching the tee, he’d also list their home club. I was stunned to hear a golfer from my amusement park/club stepping up to address the ball. He was an amateur entry and finished tied for 16th with a one-over round of 71, just one stroke behind last year’s highly touted champion Justin Lane who finished even at 70. I’m sure the guy from “my course” was the only golfer who knew how to speed up a go-kart’s track performance by “jimmying the governor” so we quietly shared that knowledge.

There was some surprising occasional trouble off the first tee. A young-looking Jesse Muller of Windham Country Club appeared to have a slight tie-dyed pattern on his polo shirt and had a spiffy golf bag. One of the older pros paused on the bridge and asked Jesse where he got it. He turned with a perfect one-word answer “E-Bay!” He had a wrapped knee and fidgeted with it as he began his round. He bogeyed the first hole, had a disastrous back nine and finished tied for 34th with a seven-over round of 77 and well out of the prize money.

As the heat crushed the site that was once the local golfing home to cartoonist Rube Goldberg, the Woodstock Open looked to provide yet another exciting finish. (Last year required playoff rounds.) Gregory Bisconti, the 47-year-old pro at St. Andrew’s Golf Club in Hastings-on-Hudson, outdueled Mike Shine, the pro at Schuyler Meadow Club in Loudonville, NY. Bisconti, playing Woodstock for the first time in his career took home the $3000 top prize by firing a six-under par 64 with an eagle on the 17th hole. Shine finished second with a solid three-under round of 67 and took home $1500.

Just for the heck of it, I looked up the winner of the 1969 Woodstock Open. Leon Randall, a Kingston guy and regular at the Wiltwyck Country Club, took home the top prize. Astonishingly, his victory came on Friday, August 15 and Randall collected his check about the same time Richie Havens was playing “From the Prison” to finally open the Woodstock Music Festival over in Bethel that very same day. No word on whether the golf pros got stuck in traffic on the way home. Randall, who was a career IBM executive, lived to be 79 before he died in 2013 at his home in the golf heaven that is Myrtle Beach, SC.

The Woodstock tournament has found a vibrant sponsor in the Emerson Resort and Spa, a swank hotel in nearby Mt. Tremper, NY. They came up with a Masters Green Jacket type of honorary garment this year for the Woodstock Open winner. It’s a thick Emerson Spa robe (with a hint of gray prison stripes) with “2020 Woodstock Open Champion” embroidered on it. A lovely tradition, to be sure, but in the staggering heat on the banks of the now-arid Saw Kill creek bed, donning the robe for a photo-op probably made it feel more like a hair shirt for Bisconti.

There’s always a guy at every golf facility who proclaims, “The best ball I hit today is when I stepped on a rake.” I’m sure it was said at Woodstock, but it was muffled behind masks and face coverings and six feet of distance. With the parking lot full by the afternoon, I perused bumpers for zany stickers. None were found. The traveling pro-am golf crowd favors vanity license plates instead. One guy’s VW Tuareg simply read “PRO” and another vehicle had “FORE POP.” After a lull between the morning and afternoon groups, I found other amusements from my spot beneath a towering London plane tree next to the pro shop. The impressive tree would take a slight breeze and shed six-inch strips of its bark which would fall from on high, clunking unsuspecting golfers milling about down below.

In my notes there was no Fanny or Miss Moses Awards because females were scarce. There was no Luke Waiting for the Judgment Day Award because there was no one named Luke in the field. I gave the Jack My Dog Award to the tall player who had a fluffy dog’s head driver cover atop his bag. He had a bad tee shot to open his round, but I lost his name in the late shuffle to finish the morning groups. I’m a little rusty with this live coverage stuff because I also lost track of the pink camo-clad Crazy Chester Award winner, so put the load right on me.