The Final Fall of Pete Rose 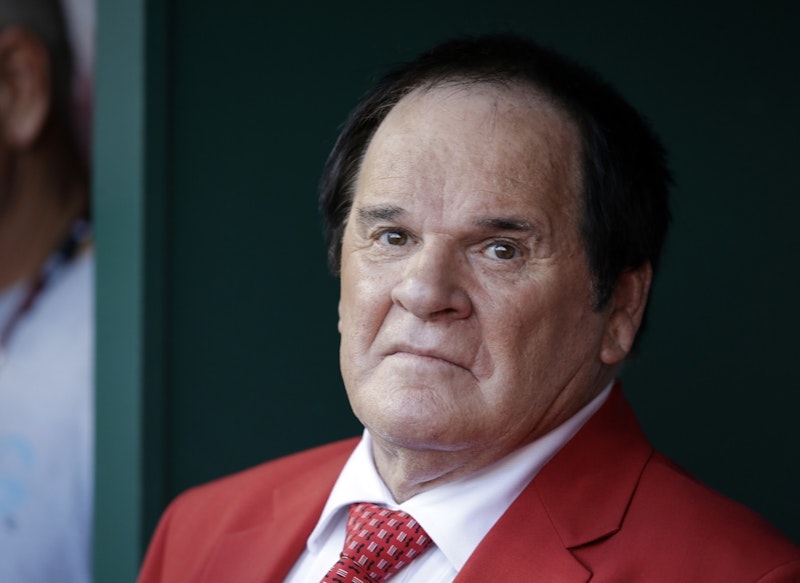 One of those mostly forgotten sports brouhahas from the 1990s took place during the 1999 World Series, when Major League Baseball announced its All-Century Team and Pete Rose was named to the team. It was the first major appearance in an officially sanctioned baseball event for baseball’s hit leader since his banishment from the game for gambling a decade earlier, and before the ceremony NBC broadcaster Jim Gray gave an incongruously contentious interview. Gray badgered Rose about why he hadn’t yet admitted that he’d bet on baseball—Rose was still three years away from doing so—and at one point told Rose that “Those who will hear this tonight will say you have been your own worst enemy and continue to be.”

Gray, nobody’s favorite broadcaster, was savaged and forced to deliver a partial on-air apology the following night. The timing of Gray’s interrogation wasn’t great—Bob Costas said it was as if some reporter had badgered Nixon about the Watergate tapes on the day of one of his daughters’ weddings—but the past 18 years have in many ways vindicated him. Especially the “own worst enemy” part.

I thought of that incident last week, when the revelation came out that Rose had admitted, in a lawsuit, to conducting a years-long affair with a teenager in the 1970s, which the woman says began when she was 15. Rose acknowledged the affair in a deposition, in which he stated that he “believed” the girl was 16 at the time.

The documents surfaced as part of a lawsuit Rose filed against John Dowd, the lawyer who investigated his gambling scandal in the 1980s (and is now part of Donald Trump’s legal team in the Russia matter). This isn’t a he said/she said situation, nor is there any chance this is an unfounded allegation. Rose has essentially admitted that he committed statutory rape.

The revelations led one of Rose’s former teams, the Philadelphia Phillies, to cancel a Wall of Fame induction ceremony for him, which was scheduled for Saturday. Also cancelled were a series of related local events, including a roast of Rose, as well as scheduled appearance at an area casino.

It also forced the Phillies to scrap a related bobblehead giveaway and, according to news reports, to destroy all 35,000 of the bobbleheads. There’s no word on whether the Phillies will allow the Phillie Phanatic to push a mock detonator, as he did during the Veterans Stadium implosion back in 2004.

There’s a reason the Wall of Fame ceremony was scheduled in the first place—Rose is beloved in Philadelphia. He helped lead the Phillies to their first-ever championship in 1980. He was the first superstar athlete in the free agency era to choose Philadelphia. The media likes him too—he’s a reliable quote, one of those all-time great local athletes (along with Charles Barkley, Doug Collins, and Bernard Hopkins) who can be counted on for a wide-ranging, news-making sports radio interview at least a couple of times a year. To this day a lot of Philly old-timers still decry the “aloof” Mike Schmidt, in favor of his contemporary Rose’s more “blue collar” style.

Rose boosters are used to defending uncommonly sleazy behavior, from betting on games to lying about it for two decades to hoodwinking a legendary baseball writer (Roger Kahn) into signing his name to a bogus book professing Rose’s innocence. I’m guessing statutory rape is where most people will jump off the bus, although probably not everybody: fans’ childhood memories, especially of championships and of guys who crashed into catchers during All-Star Games, can be powerful. Read the comments on any online story about the controversy and you’ll see that Rose, even now, retains a lot of support.

But the many Pete Rose controversies all have something in common: Per Jim Gray, Rose brought them on himself. Not only with the consistent sleaziness, but with a never-ending series of mind-boggling strategic blunders.

When he was first investigated in the late '80s, Rose’s decisions, from lying about not betting to agreeing to a lifetime ban, baffled many observers. When he finally confessed, in 2002, his confession stepped on the announcement of the election of that year’s Hall of Fame class of Paul Molitor and Dennis Eckersley, likely ruining any good will the confession brought about. Rose’s way of showing contrition about gambling was to bitch constantly about how poorly he was treated and do weekly appearances at casinos. And the statutory rape revelation was only made possible because Rose for some reason sued Dowd for defamation—for having suggested in an interview that Rose had committed statutory rape.

For the past couple of decades, Rose has lived this sort of purgatorial sub-fame, constantly advocating for his own Hall of Fame case while at the same time undermining it. Rose appears to be making his primary living as a professional seller of his own autograph, which raises the question of how much value a Rose signed baseball or jersey could possibly have. A couple of months ago, at a Wells Fargo Center autograph display, I saw a cover of the Sports Illustrated issue with Rose’s confession for sale, signed, of course, by Rose himself.

I’ve always taken the position that the ideal solution to the Rose conundrum was a compromise: Rose gets Hall of Fame eligibility, and the right to appear and be honored at ballparks, but remains banned from ever managing or working for a team. In recent years, Rose’s ban has relaxed—he’s appeared with another of his former teams, the Reds, who gave him a statue. He’s allowed, at least for the time being, to make weird, Dada-esque appearances on Fox’s MLB studio show.

But obviously, the calculus has changed, and if the door on Rose’s Hall of Fame wasn’t shut already, it is now. The Pete Rose story is a tragic one in many ways. And now, as has long been the case, Pete has no one to blame but himself.