Will this year’s Red Sox resurrect themselves? 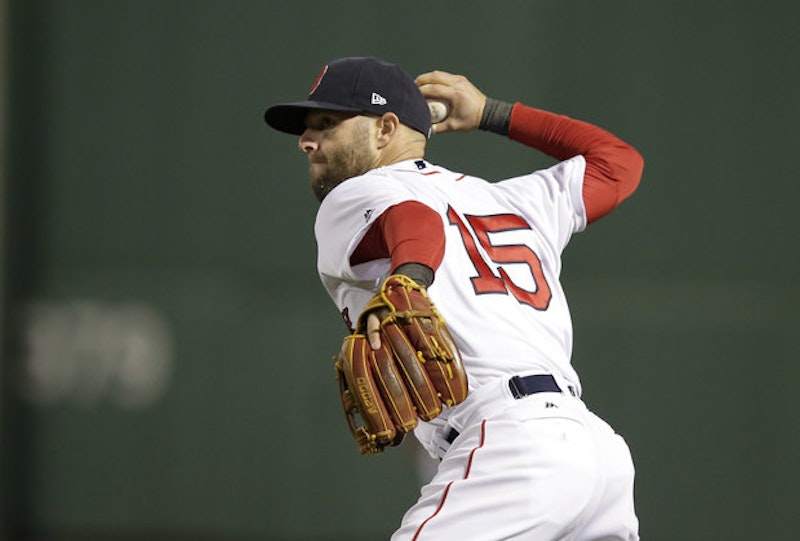 ESPN tried to quantitatively evaluate chemistry during their magazine’s spring training issue a year ago. They focused on age, experience, and cultural background. Probably kernels of truth among the data. Leadership is hard to quantify in anything. Search “leadership” and your device will shut down with endless TED talks.

In MLB dynamics, the old fashioned rules (boys’ code of tribal behavior) have gradually eased up over the years. Clubhouses are separated by language, age, and family status (married? kids?) as well as by tenure with team and personality.

Boston’s Dustin Pedroia has been beloved by fans and praised by media for years, but he chooses not to stick around after games and be the voice of the team. The media leave him alone for that because the fans wouldn't allow the media to criticize him at this point. Recently, he spoke about a June 30th incident that occurred on the team plane between starter David Price and NESN commentator Dennis Eckersley. Pedroia finally spoke because the Boston media has continued emphasizing the story. Price clearly acted foolishly and belittled Eck in front of teammates, though it appears it was partially a defensive response to Eck's criticism of Eduardo Rodriguez' rehab start. Eckersley is often loose with praise and criticism of pitchers. It could be assumed he has a bit of an axe to grind based on his career earnings, but he also gets paid to have colorful, often unfiltered opinions.

Instead of forcing fans to choose a side (Eckersley vs. Price), the nuanced reaction might be that they’re both to blame. When Price didn't publicly apologize for the plane incident, and initially didn't feel the need to clear the air with Eckersley individually, the embers stayed lit. The noise gets louder. The simmering reputation that Price has developed for not enjoying the Boston media environment becomes an issue and WEEI's nitwits yell, "Shut up and pitch." Finally, on Saturday, Price explained he would “talk it out” with Eckersley, so we can all move on.

Perhaps the biggest reason this story wouldn’t go away is the team’s age-divide. Other than the newly-acquired Chris Sale and Price and veteran stalwart Pedroia, Boston’s lineup fixtures are young, congenial, low-key personalities. Too young to have gained the contract that tends to lead to expectations of leadership among the thirsty media. Mookie Betts, Xander Bogaerts, Jackie Bradley Jr., and Andrew Benintendi are all waiting for that payday. Hanley Ramirez isn't interested in that role and hasn’t been a Red Sox long enough to be considered.

Baseball clubhouses are boys’ clubs. Some are more like country bars, others are more like country clubs, and in the biggest markets, they are places where athletes often have to be more careful about their responses, playing the cliché-ridden game of bro-speak diplomacy. They are exclusive places where "the media" often can become the enemy, or the mosquitoes that must be dealt with before heading home. Not always, as player-reporter relationships can build over time and become amicable, or at least familiar. Free agency, and the power of social media have dramatically tilted the athlete-journalist dynamic. Sites like The Player's Tribune have removed the need for the athlete to use the reporter in getting his message out. The agent becomes the editor and the desire for brand-building often silences any loud or potentially controversial thoughts. Simply put, the athlete controls the message.

Still, there are times a story's soap-operatic nature is based on some slim version of reality. Should it have been covered up by the "keep it close the vest" mantra of all exclusive clubs? The epic Red Sox collapse of 2011 left every Sox fan searching for answers. A nine-game September lead ended in arson. So the story went, the fatal collapse and autopsy of the Sox was this: they were swallowed by a fire of burnt fried chicken that was doused out by stale beer. The culprits of this "chicken and beer" narrative were three well-paid and well-established members of the rotation. Josh Beckett, Jon Lester, and John Lackey, as the story goes. The trio regularly ordered fried chicken, drank beer, and played video games while games were being played on the field. One would assume they did this only during the two out of five games in which none of them were starting, though it would be hilarious to imagine Beckett sneaking back to the clubhouse in between innings of his own start, to swig beer and get in a quick game of Call of Duty. The story bubbled up in early October and echoed around New England like a perverse version of the campfire favorite telephone game.

Lester confirmed there was a hint of truth. In mid-October, MLB.com ran a story in which Ian Browne quoted Lester:

"It was a ninth-inning rally beer," Lester said. “We probably ordered chicken from Popeye's like once a month. That happened. But that's not the reason we lost. Most of the times, it was one beer, a beer. It was like having a Coke in terms of how it affected you. I know how it looks to people and it probably looks bad. But we weren't up there just drinking and eating and nobody played video games. We watched the game."

They indeed ate fried chicken and drank beer in the ninth inning. The horror. Boston’s collapse was indeed tragic. Leading the AL East for 60 straight games, heading into September, and then bowing out so dreadfully… it was about as ugly as a season gets. But the collapse was team-wide. Former manager Terry Francona was going through personal issues, and admitted he’d had difficulty reaching the players that year. After leading the 2004 Red Sox to their first World Series in 86 years, then following that up with another title in 2007, Francona was rightfully entrenched as manager and savior heading into 2011. Fans were irate when he was unceremoniously dismissed shortly after the season. Red Sox ownership should’ve given Francona at least the 2012 season to right the ship.

The 2011 Baseball-Reference team page is littered with profane numbers. That team was forced to start Kyle Weiland (7.66 ERA) for five games. Weiland’s career spanned 42 MLB innings, 24 of which came in the last two months of 2011. One of today’s most dominant relievers, Andrew Miller, had yet to harness his arsenal. Miller was forced into 12 starts (5.54 ERA and 41 walks in 65 innings).

But if you want to find one pitcher from that staff who put together one of the worst seasons in recent history, it would be John Lackey. It’s rather difficult to allow 1.6 baserunners per inning and start more than 20 games in a season, but Lackey managed it in 2011. Four years after leading the AL with a 3.01 ERA for the Angels (ERAs were bloated in 2007), Lackey’s 28 starts were about as disastrous as one could imagine. He led the AL in hits allowed and hit batsmen. His 6.41 ERA would have signaled the end of many a career.

With even a decent season from Lackey, those Red Sox win a few more games and earn a wild-card berth. Instead, their lead evaporated in September. When it was noted in late October that Lackey would need Tommy John surgery and would miss 2012, it came as something of a relief. Lackey and his repaired elbow boosted the team in 2013. His October success helped push the Red Sox to another World Series title. Lackey’s early-career success with the Angels, helping the Angels win the 2002 World Series at age 23, mirrored Beckett’s early-career success. Beckett’s Marlins won the World Series the following year when he was 23. Beckett ended up with the MVP trophy. In that context, having been granted star status at early ages, and then winding up in Boston a decade later, the leeway they were granted during that 2011 season is interesting. If Lackey’s torturous season had occurred prior to the landscape-altering October of 2004, in which the whole region could finally exhale and proclaim the historical suffering of mythological disappointments over, Lackey would’ve been berated on a daily basis by the sports media. Instead, he was mildly criticized.

What does this brief history lesson have to do with the 2017 Red Sox? I’m not sure. David Price had a very solid year in 2016, even though his first impression was less than stellar, and his October start was uninspiring. His elbow is clearly not 100 percent, and a second DL stint this season is distressing. Many fans in New England (and yes, all over) love to complain about big-money players. Some of the criticism is deserved. Pablo Sandoval’s first impression to Red Sox fans was disastrous, and some of that had to do with his conditioning or lack thereof. His contract became an albatross for the team, which all fans who pay attention to roster construction were aware of. Yet it also has to do with a working-class aesthetic that overvalues the underdog and is skeptical of the newly-acquired star. The complaints have gotten louder and more vicious when the athlete doesn’t look like those working-class white fans. It isn’t as simple as racism, but it has to do with an outsider (free agent) who gets the big money, and doesn’t fit the image of the working-class hero for a certain subset of the New England population. The Boston sports media milks these controversies for ratings. It isn’t new, but it is tiring.

Will this year end in another minor tragedy, or will their home-grown young core (Betts, Bogaerts, Bradley, Benintendi) emerge from a July swoon and find their groove against the Yankees and Rays over the stretch run? The team’s lack of power has become a dominant storyline in the past month, and the added weight seems to have caused several hitters to feel the pressure.

Betts’ fine first-half has been clouded by ugly post-All-Star-break numbers (three extra-base hits in 78 plate appearances). Bogaerts is clearly attempting to play through an injury. Bradley’s 17 post-break games have resulted in three walks, 22 strikeouts, and a dreadful .522 OPS. Lately, Benintendi is looking plainly overmatched, especially against southpaws. On the year, his splits are dramatic (.782 OPS vs. RHP, .566 vs. LHP with two doubles and zero homers). David Ortiz’ absence has never loomed larger. With tension mounting, GM Dave Dombrowski added utility man Eduardo Nunez, acquired from the Giants less than a week ago. Though not exactly the power threat most envisioned Boston nabbing, Nunez blasted two homers in his second game in a Red Sox uniform. His 18 stolen bases may be especially useful down the stretch in close games.

Chris Sale’s Cy Young candidacy grows stronger by the day. As the calendar turns to August, the Red Sox trail the Yankees by a half-game in the division, and lead the wild-card race by a 1.5 games over the Royals, with Tampa threatening to knock either the Red Sox or Royals out of the wild-card slot, four behind the Sox in the loss column.

Of note: Boston is 9-3 in extra innings. Before you get too excited about the October close-game possibilities, remember that means the Red Sox are merely two games over .500 in nine-inning contests. With a bullpen that still ranks third in ERA (3.03, behind only the Dodgers and Indians), the team's six blown saves in July led to yesterday’s trade-deadline acquisition of Mets closer Addison Reed. Over the last two years, Reed is equally dominant against hitters from both sides of the plate. Without an experienced lefty in the pen, Reed’s 17 Ks to 1 walk vs. LHB this season will make him the designated out-getter against lefties. Reed, Joe Kelly, and Matt Barnes are a solid triumvirate, bridging the gap from starter to closer Craig Kimbrel.