While stashing Gregory Polanco in the minors. 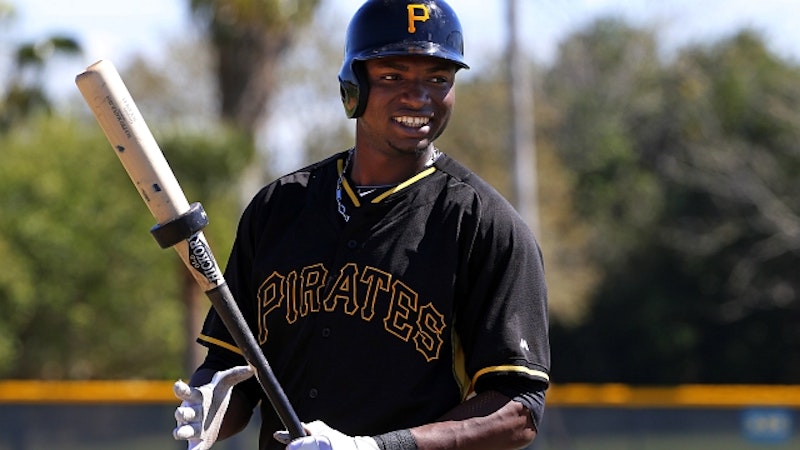 The Pittsburgh Pirates followed up last season's long-awaited playoff run with a dormant winter. The team lost starter A.J. Burnett first to retirement then to the Phillies, as well as sluggers Marlon Byrd and Justin Mourneau. Burnett was replaced by the underwhelming Edinson Volquez and the promise of Jameson Taillon. Byrd and Mourneau weren't really replaced at all.

The Pirates have scuffled in the early going of 2014. Francisco Liriano hasn't been able to replicate his 2013 success, Volquez has been predictably lackluster, and the recently acquired Ike Davis has contributed just two home runs since his trade from the Mets. The Pirates lost Taillon, the team' stop pitching prospect, early in the season to Tommy John surgery. Taillon won't be making a mid-season big league debut a la Gerrit Cole in 2013. Pittsburgh also has a gaping hole in right field where Jose Tabata has contributed just five extra base hits in over 100 at bats. Tabata shares time with Travis Snider and his .212 batting average.

The Pirates may not have an answer for Taillon's misfortune but they do have an answer in right field. Gregory Polanco is a 22-year-old outfielder who’s hitting over .350 for Pittsburgh’s Triple-A affiliate in Indianapolis. The young Dominican, who has drawn comparisons to Darryl Strawberry and soon-to-be teammate Andrew McCutchen, is praised as a five-tool prospect and expected to be a fixture in Pittsburgh for the next decade. Problem solved? Not so fast.

The Pirates are delaying Polanco's inevitable promotion in an effort to preserve his service time and prevent him from gaining an extra year of arbitration eligibility. If the team waits until mid-June to promote Polanco to the big leagues he won't be eligible for arbitration until after the 2016 season or free agency until after the 2020 season. The Tampa Bay Rays have made this practice part of their standard operating procedures and nearly cost themselves a playoff spot by keeping Wil Myers at Triple-A Durham until June last season. Tampa ended up beating out the Texas Rangers by a single game for a Wild Card berth. The Pirates hope they'll be as fortunate.

The Pirates reportedly offered Polanco a long-term contract (seven years plus three club options) that the prospect rejected. Polanco is banking on his talents making him a multi- millionaire and isn't tying himself to the Pirates for the next decade. The Pirates are thumbing their noses at a potentially great player (as well as their current locker room, coaching staff, and fans) by keeping Polanco stashed at Triple-A in favor of less talented options like Tabata and Snider. When the proper time does come to talk long-term extension with Polanco, the Pirates' current passive-aggressive approach could come back to haunt them.

Gregory Polanco will get to the big leagues soon but it may not be soon enough to save the Pirates' season. The Pittsburgh front office will only have itself to blame.