In Jurgen We Trust 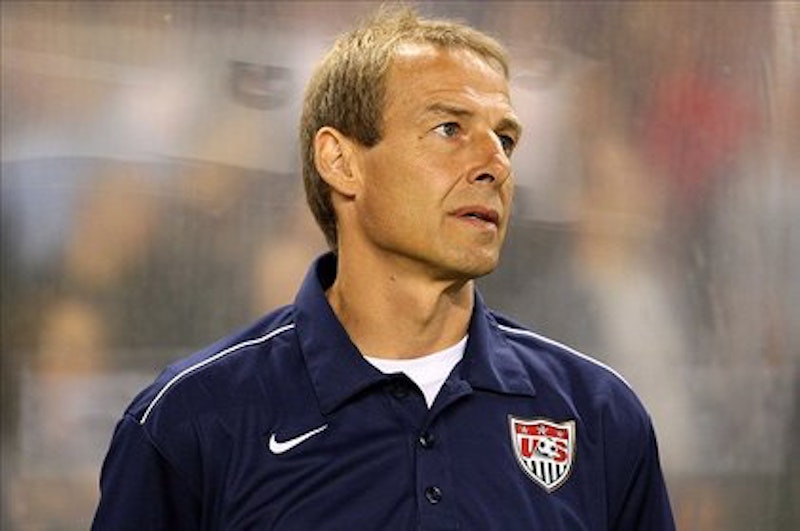 Now that soccer nerds have stopped whining about Landon Donovan being left off the U.S. national team roster for the upcoming World Cup in Brazil, we can put our faith in the man in charge of the squad. He’s the son of a master baker, and a baker himself. He speaks four languages. He can fly helicopters. He’s Jurgen Klinsmann. He’s German and therefore a soccer god.

Donovan’s demise and roster evacuation was really his own doing. The Germans have an entertaining insult which applies to a “star” player who tells his coach he’s taking a four-month break from the game in a year prior to a World Cup. He is a turnbuetelvergesser. Translation: gymbag forgetter. All U.S. soccer fans will never forget Donovan’s giant goal against Algeria in the closing seconds of the previous World Cup, and that might be a good moment for the lad to exit stage left. Poster boys eventually fall off the wall, and even with advertisers and sponsors prematurely including Donovan in their commercials and print campaigns, one cannot fault the super-prepared Klinsmann for what he called one of the hardest decisions he’s ever made. Without Donovan, Clint Dempsey and Michael Bradley can step up into the spotlight and run the on-field operations show for Klinsmann. Both are seasoned international success stories from workaday American backgrounds. I remember seeing Bradley’s 2005 professional debut as a teenager for the MetroStars of MLS. He was the son of MetroStars coach Bob Bradley and was undersized and still growing. Present-day Michael Sheehan Bradley is a fundamentals machine, an executioner of supreme soccer skills and possessor of ball knowledge. He knows when to be where on a soccer pitch, and he is always there.

Clinton Drew Dempsey is street-cred deadly as the striker-in-disguise attacking midfielder, kind of an agonizing tradition of U.S. soccer through the past decade or so. He’s got a budding hip-hop career built up from his Texas roots. That same 2005 MLS season that saw young Bradley cavorting around Giants Stadium also saw Dempsey thrashing through defenders as the main force behind the New England Revolution’s run to the MLS Cup final.

The Bradley-Dempsey one-two punch will be a thing of beauty, and by the second round of the World Cup, the “Where is Donovan?” chorus will surely be drowned out. This tournament also presents a nice opportunity for Jozy Altidore to silence his critics and prove his worth as a formidable man up front, seeking “the back of the onion bag” as announcer Tommy Smyth puts it.

With the send-off exhibitions going swimmingly, the U.S. squad is bracing for some intense travel during the big tourney in Brazil, a group of death slate that will take them to the foreboding Arena Amazonia in Manaus, Brazil, where they will face Portugal on June 22. Designed by German architects, the Anaconda-like façade of the stadium is meant to resemble and indigenous basket. Jungle humidity, rain forest torrents, scorpions, tarantulas and piranhas are all part of the game in Manaus, which will also host the first round tilt between England and Italy. What comes to mind is the immortal line uttered by Ice Cube in the film Anaconda after seeing a skin shed by the giant serpent: “Is snakes out there this big?!? I’m goin’ back to L.A.!”

Los Angeles is the land of Klinsmann, the city where he settled with his ex-model wife and two children. His teenage son Jonathan, an up and coming goalkeeper, caused a slight Twitter storm after mocking Donovan’s dismissal from the Brazil-bound U.S. roster. His father urged him to apologize, had him delete his Twitter account and even told MLS.com that Jonathan was a big fan of the U.S. team’s top scorer and had Donovan’s jersey up in his room.

Fortune smiles somewhat on the U.S. in that our game against Germany is the final match of group play, meaning both squads might enter the game knowing their statuses and looking forward to the next round. Might the Mannschaft have mercy on the legendary Klinsmann and his special adviser and fellow legend Berti Vogts? It is an unwritten future indeed. It is a game of two halves. The ball is round.

The Germans have another entertaining insult, a somewhat lengthy barb aimed at those accused of being too tidy. “Broetchen ueber der Spuele Aufschneider.” Loose translation: “He who cuts his small rolls over the sink.” Wouldn’t want any loose crumbs. And with the 49-year-old journeyman baker from Goppingen, Germany, running the U.S. national team as it heads into the slop of South American heat, there is no need to worry about crumbling pastry.