The Wasteland of Sports Talk Radio

Sports talkers want to be stars. 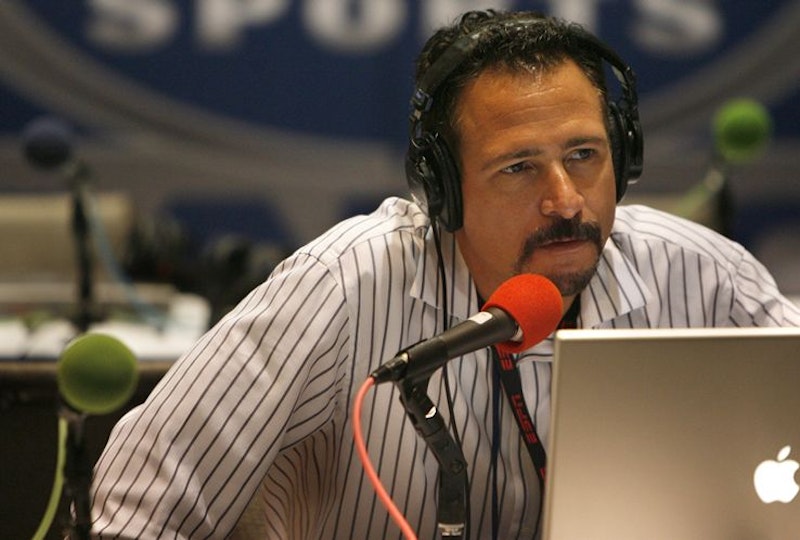 Sports talk shows were once a problem for me. Not to the point of addiction, but the amount of time I spent listening to self-involved jock-sniffers prattle on about who’d win the Heisman Trophy before the college football season had even begun started to concern me.

My typical day would start with watching Stephen A. Smith and Skip Bayless, the two most reprehensible sports talk figures, impart their "hot takes" on ESPN's First Take. Then, in my car, I'd listen to Jim Rome, and maybe Colin Cowherd and Doug Gottlieb. At the golf course, I might catch another random show like the ESPN roundtable show, Around the Horn.

This could add up to two hours of sports talk per day—in addition to regular viewing of sports events—which I'd justify by telling myself I was in my car and had to do something, but I eventually came to realize I was spending far too much time listening to fairly repugnant individuals just to get my "sports fix."

Repugnant individuals such as Smith and Bayless, two windbags who think of themselves as equals with the actual athletes they glibly gab about, without consequences, for big bucks. When NBA superstar Kevin Durant questioned the veracity of his reporting, Smith went into full gangster mode. Looking straight into the camera, he said repeatedly, "You don't want to make an enemy out of me." The implication was that he could dig up some dirt on one of the sporting world's humblest and most devout Christians. Watching this video fills me with disgust.

Bayless—who’s leaving ESPN for Fox Sports in August—is hardly better, which he quickly demonstrated after Smith's chilling threat by frantically stroking his ego rather than bringing him down to earth. Bayless is the son of an abusive alcoholic father, and seems scarred. He's a failed high school athlete who's trying to capture glory that eluded him by knocking down elite athletes. Bayless was known to puff himself up by mentioning that he played guard on a Texas team that won the high school state basketball championship, but former NBA star Jalen Rose revealed on First Take that he'd averaged 1.4 points a game in his senior year after playing on the JV team as a junior. Bayless once said that his obsession, Tim Tebow, who's now out of the NFL, would be the next Brett Favre. The Washington Post reported that Bayless sees his closest friends only once or twice a year, due to his work.

And then there's Jim Rome, who affects a tough, hip-talking on-air persona. Dubbed "Van Smack" by his adoring fans, who he calls "clones," Rome fashions himself the master of the putdown. Back in 1994, Rome repeatedly mocked NFL quarterback Jim Everett when he appeared on his show, calling him "Chris," as in "Chris Evert," the female tennis player. Everett warned him to stop, but when the smirking Rome persisted Everett turned over the table between them and knocked the host to the ground, producing the most famous video in sports talk history. ESPN fired Rome for this incident.

Thoroughly obnoxious and supercilious sports talker Doug Gottlieb, who got kicked off the basketball team at Notre Dame for stealing his roommate's credit card and charging $1000 on it, once appeared on a pregame TV show with an all-black panel and said, "I'm just here to bring diversity to this set, give kind of the white man's perspective." Gottlieb has no particular insights to offer. His smug, know-it-all tone suggests he's trying to make up for his past failures to advance as an athlete.

The list goes on, but the root of the sports talk problem is that controversy, rather than intelligent and informed commentary, wins every time. In a perfect world, we'd have great sports writers bantering with each other and addressing contemporary sports issues, but there aren't any modern day Grantland Rices or Red Smiths doing sports talk now. We're left with hacks who always seize on the negatives and think they’re stars.