It might be time to trade pending free agents. 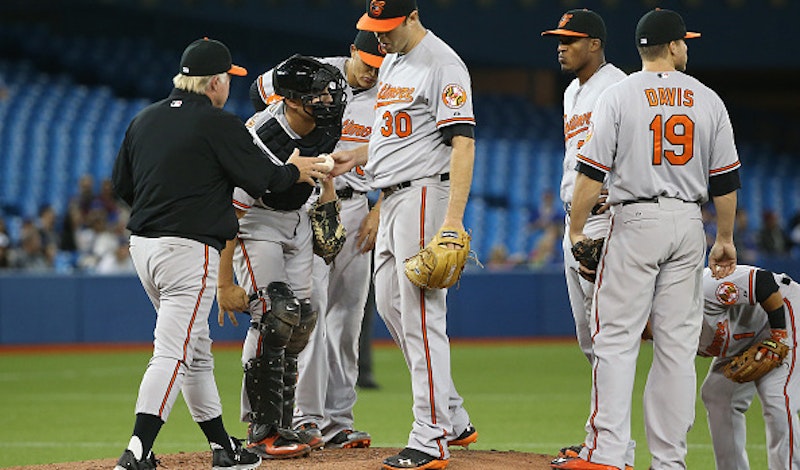 After an uninspiring offseason, the Orioles look like a short-handed, anemic, injured also-ran. The only saving grace is that after years of dominance, the American League East doesn’t currently feature a single World Series contender.

A prolonged offensive slump has Orioles fans bewildered and frustrated. After three consecutive winning seasons, and a pair of playoff appearances, Baltimore fans have rightfully come to expect a competitive ball club. Despite the early season struggles, the Orioles remain in the thick of the pennant race in this downgraded version of the AL East. The Orioles are currently in fourth place but just 4.5 games behind the division leading but seriously flawed Yankees. A hot streak, maybe spurred by the healthy returns of Matt Wieters, JJ Hardy, and Bud Norris, could have the Orioles right back at the top of the standings.

The biggest problem facing the O’s is that the current roster has more than a dozen pending free agents. While the general wisdom may say that players will perform beyond their career averages in their contract years it hasn’t been the case in Baltimore. The offseason departure of longtime fan favorite Nick Markakis may have had more of an impact on the clubhouse than the lineup. Markakis is an overpaid singles slapper in Atlanta but was a pillar of stability in the O’s dugout. If the front office would allow Markakis to skip town, is anyone safe?

If they keep playing like this the answer is likely no. The Orioles have yet to field their projected Opening Day lineup. A team that relied on up the middle defense currently has an All Star catcher, All Star shortstop, and starting second baseman sidelined with injuries. Fans can moan about Nelson Cruz in Seattle, but Buck Showalter certainly never planned on a Steve Pearce-Ryan Flaherty keystone combination.

The Orioles could seek to sell off some of the pending free agents. Wei-Yin Chen, Chris Davis, and Darren O’Day probably have the most value on the trade market. Wieters and Norris should return from the disabled list in the next few days with a chance to restore some trade value. Tommy Hunter usually has me reaching for the remote or Rolaids, but he has a power arm with playoff experience, so some contender may take a chance on him in July.

Those players could lead the Orioles right back into contention. Such a reversal may not be the best thing for the Orioles’ long-term future. Davis, Chen, Wieters, Norris, Hunter, and O’Day are unlikely to return next season. The Orioles have been stockpiling young pitching and should have a bunch of homegrown hurlers ready to step up next season. The focus on pitching has left next to nothing in the way of positional prospects in the upper minors. The spring excitement over AAA outfielder Dariel Alvarez has dissipated after a season long slump. If GM Dan Duquette does ship off players like Chen, Davis and Wieters, it should be with the aim to obtain some offensive firepower.

The O’s current situation is eerily similar to the summer of 1998. After reaching the playoffs in 1996 and 1997 the team sputtered in 1998. Rather than swap pending free agents like Roberto Alomar and Rafael Palmeiro for young players, the Orioles played out the string, missed the playoffs, and then whiffed in the following June’s draft. The repercussions of the 1998 season and the disastrous 1999 draft hindered the team for the next decade.

The course of the Orioles’ season will be determined over the next seven weeks. If the O’s can right the ship and remain in the thick of the pennant race, Duquette may look to add an outfield bat. If the struggles continue, fans should expect a massive upheaval in the Camden Yards clubhouse.