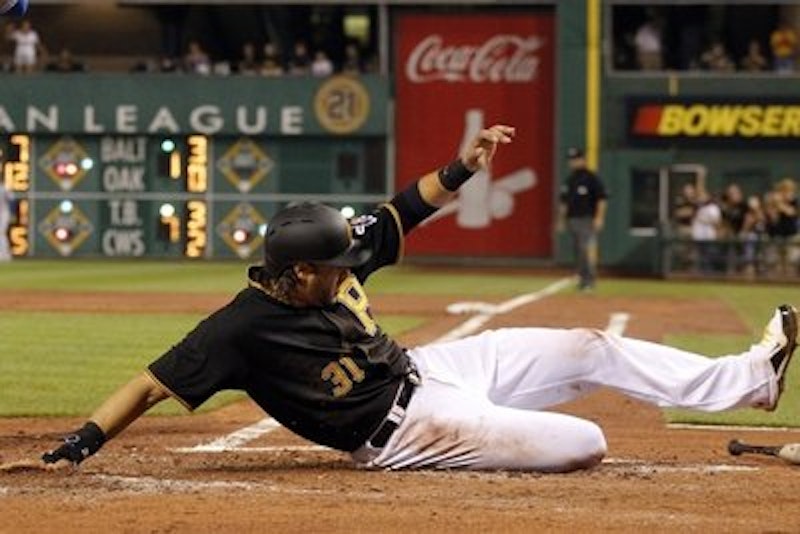 Things are askew in late-September when magic numbers are published in Major League Baseball circles and the public strains to grasp the complications of the playoffs. Fans are helpless victims of television scheduling crimes as the Wildcard best-of-one series’ are dished off to ESPN and TBS respectively. Fox makes National League division winners wait four days and nights before playing game one of the Divisional Series postseason contests. Teams struggle to avoid being iced like NFL placekickers. Hot pitchers cool off. Meteorologists become relevant in northern climes. Back-up catchers hide hernias.

It should be noted the whole “hunt for October” promotional tagline loses all relevance this year as the regular season does not conclude until Sunday, October 4.

Quite suddenly the final page of the folding pocket schedule becomes the Dead Sea Scrolls for a few teams and the Magna Carta for others. Add to this messy vortex a Papal visit, Yogi Berra obituaries, another pitch-count crisis in Queens, an Autumnal Equinox and Volkswagen becoming the official automobile brand of cheating franchises such as the St. Louis Cardinals and New England Patriots.

For the Pittsburgh Pirates, their September song hit some low notes when the feel-good story of Korean infielder Jung-Ho Kang came to a crashing halt in the first inning of a home game against the then-red-hot Cubs. Chris Coghlan’s unsuccessful take-out slide on a double play resulted in Kang’s knee being hyper-extended with the impact tearing a lower meniscus, rupturing an MCL and breaking his upper tibia bone. Suddenly the inspirational clutch-hitting machine with the Speed Racer hairdo was helped off the diamond never to be seen on it again for six to eight months. I pray there’s no ham-handed attempt by MLB to change the baserunning rules for slides into second base (Sports Illustrated has already demanded this), and that Kang’s recovery is of course quick and thorough. With Kang down and three games lost in a row during a horror show series against the Cubs, the Bucs were humiliated the next night at Dodger Stadium by Paxil poster boy Zack Grienke. With the first-place Cardinals reeling and the Cubs breathing down the necks of the Pittsburghers, it appeared Clint Hurdle’s charges had struck rock bottom and were in search of shovels. It was time to light a candle on the shrine, time for dugout shamans to appear.

The next day brought the day job, which is driving a taxi. Late-morning I was bound for a customer calling from the front porch of a Red Hook boarding house. A transient fellow looking to check himself into a rehab at a Poughkeepsie hospital. He’d purchased a plastic bottle of Crystal Palace vodka during a taxi run the morning before when he made the booking for the Poughkeepsie trip. I pulled up to the house and he was slumped on a very low chair. He saw me approach; I waved and loaded his suitcases into the trunk of the cab. He then attempted to erect his six-foot-five frame from the chair and then slipped on something and fell backward. He was speechless and grinning. The something he slipped on was a small puddle of his own urine. He wobbled again to his feet, this time missing the puddle. His Michael Jordan-era NBA shorts then sprung another leak as he dribbled down more bodily fluids onto the porch floor. I returned to the trunk of the taxi, opened it and removed his suitcases, placing them back on a dry portion of the porch. I told him “not today” and left him standing, swaying in the pre-autumn late morning sunny breeze. It was that night the Pirates rare four-game losing streak began.

The Pirates must use the rest of this month to avoid slipping on any puddles of their own making. The defense and baserunning has been shambolic. Jordy Mercer is back in charge of the shortstop hole with Kang out, and it’d be nice if Starling Marte could keep hitting Gary Sheffield-like line drives to the outfield walls, perhaps inspiring strikeout machine and error-prone first baseman Pedro Alvarez to crank up his power numbers.

The shrine candle worked and the Bucs beat Kershaw last Saturday, then tacked on a series win with another one-run victory on Sunday. It was time to go to Denver, Hurdle’s old stomping grounds, where runs flowed and things went extremely well heading into this weekend at Wrigley Field.

It was also time to balance out all of this televised baseball by gathering some live athletic ineptitude from my local source that is Bard College in Annandale-on-Hudson, NY. But not so fast. The men’s soccer squad was at 3-1-1 and were hosting Green Mountain College for a Saturday matinee. The Raptors ran up the score in an impressive 8-0 trouncing of the tiny, non-conference opponent. Coach Andy McCabe, a New England eccentric, sat comfortably on the bench as his team went to 4-1 on the season. Never seen him so relaxed. So it was time to go watch the Mets lose to the Yankees on TV. The closest joint was Two Boots Bard, a northern outpost of Mets fanatic Phil Hartman’s resilient chain that began in the East Village back in the cannibal-soup-in-Tompkins-Square days. I pulled into the Two Boots parking lot certain that Hartman is sitting in his luxurious third-row season ticket chairs at Citi Field and… I was right. The television above the bar was tuned to CNN’s Pope coverage. So much for watching Mets fans wallow during a Subway series.

The evening’s entertainment was an accidental set from guitar virtuoso Connor Kennedy slumming outdoors at an overpriced tourist bar in Rhinebeck. His stripped-down band was breaking equipment as midnight arrived, and for an encore he dusted off a Blues Brothers reference by blasting out Steve Winwood’s “Gimme Some Lovin’” which Jake and Ellwood employed in the movie to open their show at Bob’s Country Bunker. Kennedy should’ve followed up with the theme from Rawhide but he didn’t. He had to get back to being famous and playing major festivals the next weekend.

As the Bucs head into Chicago with the Cubs cooling ever so slightly, I can only hope the Pirates are not singing the blues by the time they get back to Pittsburgh for three games against the first-place Cardinals. It’s known the loss of Kang has not killed the Pirates. Now we wait to see if it’s somehow made them stronger.