Save Your Yankees Disgust

The Yank’s owners are rude, flamboyant and obnoxious, but don’t blame them for spending money to improve their team. 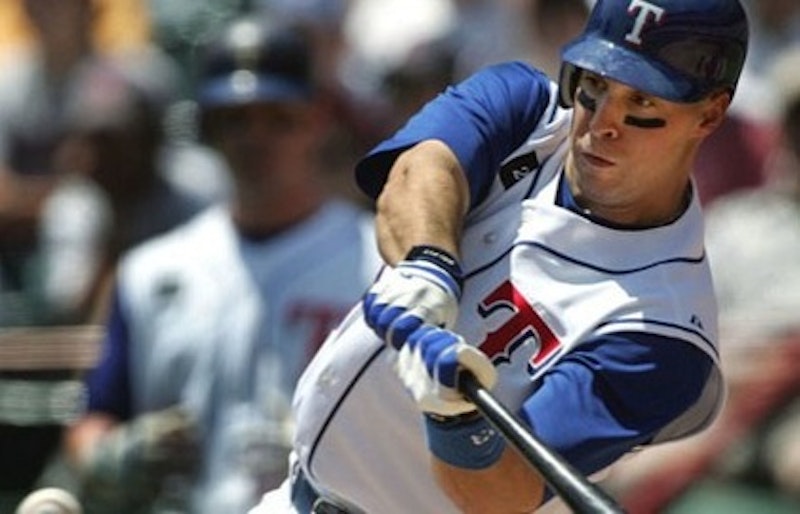 Friends, Americans and baseball fans around the globe, lend me your eyes: I’m writing to praise the New York Yankees, not to bury them.

Don’t misinterpret this message, for my Yankee-hating bona fides are second to no one. Over the decades, I’ve cursed Mantle and Munson, Martin and Maris, Jeter and Giambi, Posada and Pepitone, Reggie and Rocket, Tito and Torre, and Dent and Damon. There’s a particular loathing for Paul O’Neill, YES yes-man Michael Kay, Mike Mussina and, it hardly bears repeating, the most odious athlete of this era, Alex Rodriguez, aka A-Fraud. As a Red Sox fan I’ve been threatened and punched by creeps at Yankee Stadium, endured slings and arrows and misfortune from skunks in the stands, and once gave my sons permission to give a bow-tied afternoon drunk the finger after he hooted at my wife for the crime of cheering a David Ortiz blast into the right field seats.

Nevertheless, the recent commotion from baseball media commentators—in print, on the tube, online and at parties—after the Yankees signed free agent Mark Teixeira for $180 million has been the most knee-jerk, naïve and plain dumb hyperbole that’s occurred in the past year. The Yankees are ruining Major League Baseball! The Steinbrenners Hal and Hank (and GM Brian Cashman) don’t play fair! Locking up three players—aside from Teixeira, they nabbed C.C. Cheeseburger and A.J. Burnett—for a total of $423.5 million is unseemly during a crippling recession and the world’s most famous sports franchise is once again spitting at people with prudence and manners!

What a load of hooey.

Despite the indignation from sportswriters and other owners that the Yankees aren’t abiding by the MLB’s new and hardly unspoken tightwad rules—did they ever, going back to the 1950s when they used the Kansas City Athletics as a virtual farm team?— does anyone consider that if New York’s management has the wherewithal and desire to spend money on players, it’s their privilege to do so?

After all, the United States is not yet a socialist country.

Twinned in villainy with the Steinbrenners is the skeezy agent Scott Boras, a man whom, no matter what you think of him, negotiates very lucrative contracts for his clients. There was an extraordinarily dopey column by a blogger at onlineseats.com, which not only riffed off a horribly dated Frank Sinatra cliché—the headline read “It’s Scott Boras’s World, We’re Just Living In It”—that blasted Boras for once again making a buck or two. This person, apparently an Angels fan, wrote: “[I] do not consider you to be a professional baseball team until Mr. Boras… has reamed you in the off-season… [The Angels] were the prettiest girl at the ball last season, but have been used and abused like Britney Spears after just a single season with the best rotation in baseball.” ESPN’s Peter Gammons rebutted the whining about Boras with this zinger: “Boras doesn’t want to be the good guy, and doesn’t care who gets burned as long as his clients get the best deal; didn’t [legendary lawyer] Edward Bennett Williams do the best he could for Joe McCarthy and Sirhan Sirhan?”

And if I read or hear one more imagination-impoverished key-puncher moaning that the Yanks must’ve missed the message that Gordon Gekko’s motto of “Greed is Good” is now unspeakably gauche, I do think I’ll deposit my latest meal on a copy of The New York Times. (On the subject of the Times, the parent company is reportedly, according to The Wall Street Journal, conducting a deep-discount yard sale for some its assets, including its 17.5 percent stake in the Red Sox, as well as The Boston Globe, purchased for $1.1 billion in 1993 but now predicted to fetch as little as $20 million.)

Topping off the analogies was Murray Chass (murraychass.com), a former—thank the Lord for small favors—Times columnist who suggested, “The Yankees operate the way they operate because they can. While the rest of the economy is depressed and showing no signs of recovery, the Yankees are awash in cash. It’s as if they are the beneficiary of Bernie Madoff’s Ponzi scheme.” Still-employed Times writer Harvey Araton, a sensible guy, also couldn’t resist piling on, writing on Dec. 24, “If there is a deep recession with budget austerity, it is news to the Yankees. While they spend like an OPEC nation when oil was trading at $140 a barrel, they continue to hit the city for sweetheart treatment, most recently for another $259 million in tax-exempt bonds on top of the $940 million they were already given.”

Araton’s is a fair point, and I find public financing of ballparks really sketchy unless the venue is built in a blighted area where a raft of jobs could be created, but don’t blame the Yanks; New York City’s elected officials could’ve exercised restraint and shown the Steinbrenner family the door. The Philadelphia Inquirer’s Phil Sheridan, a lousy writer who may also go online after the Inky goes out of business, opened his own Christmas Eve column with this declaration: “The New York Yankees represent the very worst of America.”

Are the Yanks trying to buy a pennant and World Series? Of course, just as they have for years. When you’ve got the dough, you’re going to spend it. Did Barack Obama, drawing mild rebukes from liberal editorialists for mocking their sacred campaign finance “reform” by opting out of public financing for the general election, also seek a monetary advantage against Hillary Clinton and then John McCain? Yes, and it was smart for him to do it. Unlike the president-elect, however, the Yanks haven’t been quite as successful this decade: despite shelling out a fortune in salaries, the team hasn’t won a World Series since 2000 (almost a crime in the Bronx), and have seen the likes of the skinflint Marlins, pre-Arte Moreno Angels, the Cards and D-Backs take home the trophy in recent Octobers.

Mark Attanasio, owner of the Milwaukee Brewers (who lost out in the Sabathia lottery), wrote to Bloomberg News saying, “At the rate the Yankees are going, I’m not sure anyone can compete with them. Frankly, the sport might need a salary cap.” Hmm, I think Attanasio might be whistling a happier tune if his club was in the American League, where a weekend series with the Yanks brings also-ran franchises like the Orioles, A’s, Royals, and Blue Jays an enormous jump in attendance revenues. My next-door neighbor and I engaged in sports small-talk at a recent holiday party and he was livid about the Teixeira bagging, also calling for a salary cap. Now, I like this fellow a lot, but it was a little strange hearing him rant since his team, the Mets, just nabbed K-Rod from the Angels and opened the vault for Johan Santana last winter.

As a Bosox fan, the most important thing each summer aside from Boston winning is New York tanking, and it’s my hope that despite the influx of new talent, the aging Jeter, Posada, Damon and Rivera (the best closer in MLB history will, one of these years, falter) won’t be able to keep pace and once again the NYC media will dump on the Yanks. Such a summer occurrence is far better than even a bumper crop of silver queen corn and sweet & sour plums. Nevertheless, even though I was disappointed the Sox owners—obviously one of baseball’s wealthiest franchises, with the fourth largest payroll in ‘08—couldn’t complete a deal for Teixeira, I don’t fault the Yanks for attempting to field the best team possible.