Although the Florida Marlins have made progress in soaking residents for a publicly funded new stadium, history says it won’t happen. Move the team and end a disgraceful MLB chapter. 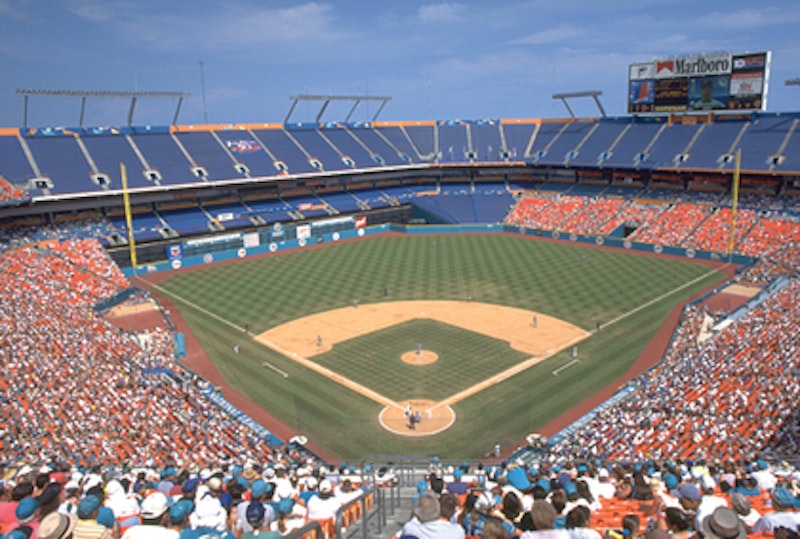 A typical half-filled day at the ballpark for the Fish.

The sorry state of the Florida Marlins wasn’t the lead story in sports sections across the country on Sept. 4—nothing competes with the Yanks’ blessedly dismal disarray or Serial Senior Citizen Basher Manny Ramirez carrying the Dodgers to a division title—but the fact that the day before the Marlins drew a total of 600 fans for an afternoon game at the hideous Dolphin Stadium was fairly astonishing. Aside from Josh Beckett closing out the Yanks in the ’03 World Series, I’d never given much thought to the sorry franchise until the beginning of this season when my son got mixed up in a fantasy league at school and ended up with several Marlins. All of a sudden, when he wasn’t rooting for the Bosox, the nattering in between innings while we surfed the MLB Extra Innings package was all about Hanley Ramirez, Dan Uggla, Jeremy Hermida, Cody Ross, Kevin Gregg and Joe Nelson. I’m not a National League fan, so my familiarity with these players (aside from Hanley, who was a top Sox prospect traded to Florida in the Beckett/Mike Lowell deal) was slim.

Since then, my interest has perked up about the club, and last Saturday night I watched a heartbreaking Marlins loss to the Phillies, which essentially ended their attempt to pull an ’07 Rockies and win a berth in postseason. And, in fairness, that game did attract some 28,000 fans, but the reality is simple: the Marlins need to move to another city. I’m aware that the Florida Supreme Court has apparently paved the way for the Marlins owners to construct a new taxpayer-funded stadium in Miami’s Little Havana, but anyone who’s followed the long battle about the relocation has to be dubious that it’ll ever come to fruition. (As I said, I haven’t tracked the Marlins before this year on the field, but any baseball fan would be captivated, or repulsed, at the team’s low payroll, awful attendance and seemingly annual auctions for their best players.)

Back in 1999, while on a trip to Miami, my older son and I did go to a Marlins game, and with the possible exception of the now-abandoned (again) RFK Stadium in Washington, DC, I’ve never been to a worse venue for baseball. Not only did it take an hour to get there from our South Beach hotel, but also there couldn’t have been more than 2000 people in the stands, and most of them were entirely bored. So sure, if the team’s owners can bamboozle the state into a risky deal—there’s been no indication so far that businesses would pop up in Little Havana and thus jobs created, justifying (sort of) the burden on the pockets of residents—a half-hearted mazel tov is in order. But in today’s economic climate, I find it hard to believe that this transaction will ever be completed, and meanwhile, while MLB continues to sock away immense revenues, the Marlins players and their tiny base of fans will be left to flounder.

About a month ago, before the flurry of legal action in Florida, I bandied about possible cities where the Marlins could go with Craig Calcaterra and, as he’s more knowledgeable about the economic ramifications of relocation—Calcaterra’s a lawyer by day—he immediately shot down my favorite choice: Mexico City. It seemed like a natural, with the enormous population, the welcome recent influx of Mexican players, and because, at least to me, it’s a world-class city. There was some romanticism on my part, as I remembered having a blast as a 19-year-old going to my first bullfight there with a college buddy, and both of us feeling intoxicated not only by the Tecate beers but the raucous, sold-out crowd that was unlike any other sporting event I’d ever attended. Calcaterra sensibly said: “I think Mexico City would create a huge competitive problem because the elevation is so damn high (7300 feet above sea level). It took Colorado nearly 15 years to figure out how to win in that park and it’s still not easy, so trying to make Mexico City work from a roster construction perspective would be a nightmare.”

We both agreed that Brooklyn or Northern New Jersey would turn the Marlins into a cash cow, but that the owners of the Yanks and Mets would never let that happen. Remember that when the Dodgers left Brooklyn over 50 years ago due to lousy crowds and Walter O’Malley’s prescience of exploiting the burgeoning California market, attendance just wasn’t at the same level as today. The Yankees, who once again drew more than four million spectators in ’08, often played to relatively paltry crowds, even in 1961, when Roger Maris broke Babe Ruth’s home run record.

South of the border once again, I also like the idea of Monterrey in northern Mexico, which has a metro population of three million, but the exchange rate discrepancies would raise a stink with the players’ union and probably scotch such a deal. One can dream of the day when MLB expands to Havana, but with relations between Cuba and the U.S. still rancorous after Fidel’s long regime, that’s a way off.

There’s San Antonio, another huge Texan city that could fit the bill; or, ESPN’s Rob Neyer’s personal favorite, Portland, Oregon, but I doubt either of those cities have the oomph to build a successful franchise. Which brings me to Las Vegas, a daring move that’s as controversial as exciting. First problem is that MLB commissioner Bud Selig—who has a problem with billionaire Mark Cuban buying the Cubs, for crying out loud—would never go for it, too much vice for his taste. But as a proponent of legalized gambling throughout the United States, I find Las Vegas very intriguing. Calcaterra takes an opposite view, with the reasonable argument that casino owners, currently slumping because of the economy would object, believing that tourists attending Las Vegas Marlins games 81 times a year would cut into their revenues. As for the locals, he points that so many people there work nights in the gambling business and wouldn’t be able to attend games. I’d counter that an increase in tourism for baseball-starved fans would more than compensate, and also create more jobs, but Selig’s ingrained prudishness probably makes a move to Vegas moot anyway.

One thing is almost certain: the Marlins players are getting screwed and the franchise (which, since its inception in ’93 has won two World Championships, and has more than intermittently fielded competitive teams) would prosper by saying adios to Florida.

A follow-up: The Yankees’ finale at their “cathedral” was as vain as I'd expected. Amidst all the hoopla and tears and reminiscences on Sept. 21—coming to a crescendo after a full season of misty eulogies—let’s remember that the Steinbrenners’ motivation for a new ballpark was based purely on increased cash flow. Jeez, the new Yankee Stadium is across the street from the current version. The New York Times’ Dave Anderson, on Sunday, was by far the most eloquent on the subject. As Anderson says, this was purely a financial move and doesn’t deserve much “fuss.”

I couldn’t stomach all the pre-game ceremonies on ESPN for the curtain-fall, but have to admit that while watching the Yanks beat the Orioles, by far the most engaging 15 minutes was when Yogi Berra and Whitey Ford spoke in the broadcaster booth with Jon Miller and Joe Morgan. Ford especially was a riot, spinning yarns of the old days, alluding to his carousing with Mickey Mantle, and gently sparring with Yogi about historic plays at the Stadium. Forty years from now, when the new Yankee Stadium is about to fall, I simply can’t imagine Derek Jeter and Andy Pettitte gabbing with the same unassuming charm.