Major League Baseball’s wave of nostalgia over the final season at Yankee Stadium obscures the fact that this teardown was unnecessary. 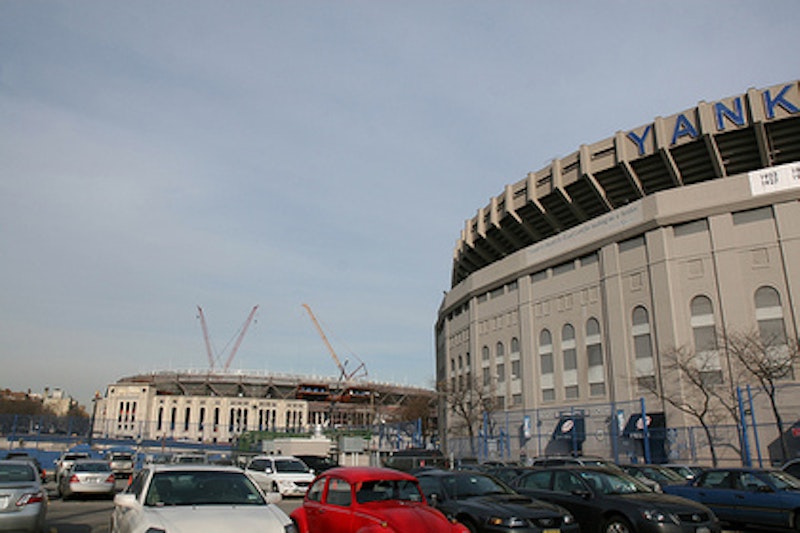 Wouldn’t it be grand if, on Tuesday night, just as the All-Star game was getting underway, an unrelenting thunderstorm blanketed New York City and forced the postponement of this annual parade of sports celebrities? Sorry to be a killjoy, but after listening to promos on ESPN, Fox and YES for the exhibition contest this past month, I’m tempted to watch a movie or one of those obscure Japanese channels on cable rather than endure the endless teary-eyed tributes to Yankee Stadium that have consumed more airtime than even the presidential campaign. I’m as sentimental about the history of baseball as the next schlub, and have seen more games at the Stadium than any other ballpark, but aside from the well-deserved tribute to late Bobby Murcer—who was unfortunate enough to be dubbed the second coming of Mickey Mantle and played for the Yanks during their blessed fallow period in the mid-late 60s and early 70s—the continuous blather about the final season at one of America’s great “cathedrals” that’s guaranteed to be spewed that night promises to be nauseating.

Unlike the demolition of Shea Stadium, which is a dump where the only seats that won’t cause a crick in your neck are directly behind home plate, there was no reason for the Yanks to move across the street except for the extraordinary new stream of revenue it’ll bring the Steinbrenner family. When the new Yankee Stadium opens next year—a replica of the current one—the only difference for fans will be the increased cost of attending a game, with prices so high that going to a ballgame will nick your wallet more than a Broadway play.

In The New York Sun last week, Thomas Hauser put this grab for dollars—and let’s not forget that New York taxpayers will bear some of the brunt—into perspective. He wrote: “The original stadium once seated 71,699 fans for baseball. Its current capacity [after a facelift in the mid-70s] is 57,545. The new stadium will accommodate 55,000 [actually a few thousand less]. More significantly, it will be constructed in a way that positions the most expensive suites at field level. That’s like the Vatican tearing down St. Peter’s Cathedral to build a new house of worship with a Jumbotron and luxury pews. The new Yankee Stadium will have 1,800 ‘legends’ seats at prices ranging from $2,500 to $5,000 per seat per game. Those prices are obscene.”

I certainly have nothing against the profit motive, and although owner George Steinbrenner was in his heyday an often entertaining tabloid buffoon, give him credit for spending millions upon millions not just for the sake for attendance totals but because he wanted to the Yanks to win every year, which is what one would expect from a wealthy man who acquired a franchise as the fulfillment of a childhood dream.

What sticks in my craw is that building a new Yankee Stadium is just so unnecessary: sure, the current venue could be spruced up—hiring a new, and better-paid, fleet of enthusiastic concession stand employees would be an immense improvement, since right now you can miss two innings standing on line for a beer and pretzel—but with over four million spectators watching the Yanks play every year now, you’d think this could be done without passing down the cost to already-strapped customers. Hauser’s mostly correct when he says, “The new Yankee message isn’t ‘bring your kids.’ It’s ‘bring your clients.’”

There’s nothing sinister or modern about conducting business at a ballgame: salesmen making pitches to potential clients who happen to be sports fans makes a lot of sense. In fact, when I owned the weekly New York Press, we sprung for season tickets and the investment—about $15,000—was recouped by the successful wooing of new advertisers by the end of May, a most pleasant set of circumstances. Yet one of the glories of Yankee Stadium, even in the 1990s, was the congregation of a legitimate mixture of people from all sorts of backgrounds. You’d see, all in one section, guys in suits trying not to get mustard on their ties along with wholesome families, bare-chested youths with “Jeter Rules” painted on their bodies and older New Yorkers, scorecards in hand, who might engage in conversation about seeing Joe DiMaggio’s graceful defense in center field or seeing Phil Rizzuto on the subway before a game.

Maybe this is alarmism run amok, but if the reports about outrageous ticket prices are correct, it’s possible that in the future Yankee Stadium will be populated by the elite alone, which pretty much sucks. And, just like the Boston fans who’ve been priced out of Fenway Park and flock to other stadiums to see the Sox play, displaced Yankee diehards will be on the move as well.

The final year at Yankee Stadium—and as the Daily News’ Mike Lupica pointed out today, it’s no longer “The House That Ruth Built,” but rather “The House That Mayor [John] Lindsay Rebuilt In the 1970s”—is a manufactured gift to the Steinbrenners by the media, with increased television ratings because sometimes the public are sucker-bait lemmings. The only reason for constructing “The House That Jeter Built” is to provide ostensible justification for outlandish prices for corporate sites, general admission seats and $11.95 dogs. What consumers get from this one-sided deal are slightly more comfortable chairs, more bathrooms and a juiced-up sound system for ubiquitous Beach Boys and Aerosmith songs that’ll increase your headache between innings.

As someone who grew up on Long Island and later on lived for 16 years in Lower Manhattan, I’m not a heartless bastard who’s bereft of fond Stadium memories. One summer day in 1966, my dad skipped work at his car wash and we sat in two-dollar bleacher seats and relished another Yankee loss, with a Tom Tresh homer giving fans the sole reason to cheer. I saw Yaz play there in ’67 when he carried Boston to an improbable pennant. And through the years I was verbally—and once physically—abused for daring to wear a Bosox cap at games that were critical in that storied rivalry. More recently, I remember having tickets for the first home game of the 2001 World Series against the Diamondbacks and, to my older son’s immense disappointment, giving them away. It wasn’t long after 9/11, of course, and there just wasn’t any way I’d risk a possible terrorism attack on the subway to the Stadium for a baseball game. As it happened, one of my older brothers did arrive on time that night for the contest, but left after a half hour because the security lines were too long.

My family is going to attend a Sox game at the Stadium at the end of August, but it’s more an excuse for a visit to the city than any desire to see the “cathedral” one more time. With any luck—not that I’m counting on it—the 2008 Yanks won’t make the playoffs and the Steinbrenners will be forced to choke on their avarice when the team plays the last home game of the season on Sept. 21 against the Orioles. That would be a fitting finale to this unseemly chapter in baseball history.