With social media on hotseat; time to raid friends list of the last left-handed catcher. 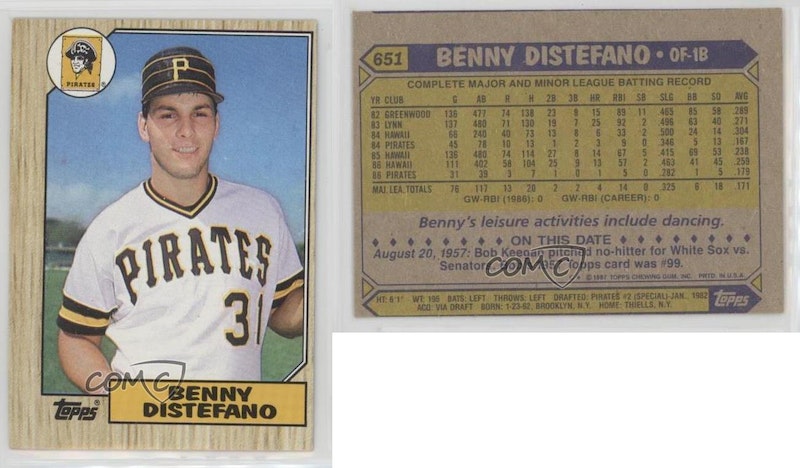 A few days ago, on an innocent Pittsburgh Pirates Facebook fan group, posts appeared from former Bucco (and former Astro and Chunichi Dragon) Benito James Distefano. He loaded photos of cool stuff Willie Stargell gave him apparently during a minor league rehab back long ago. A sweet glove and a 1979 cap with 2 “Stargell stars” astride the P insignia on the railroad conductor style hat. Distefano seemed to be fishing for prices, I thought, but no one stepped in to accuse him of that or take any other memorabilia bait. There are other websites for that, I’m sure, and I’m just being cynical. The Pirates fan page where he appeared rarely if ever gets a lot of love from anyone officially affiliated with the 125-year-old Pirates organization. So this was a semi-big deal.

Out of boredom as I waited for Bundesliga soccer matches to come on my television, I asked why not explore the 792 friends of Distefano for former major leaguers and see what they do? With President Trump gunning for Twitter rules, maybe Facebook would be next, so I raided Distefano’s friend list. Within minutes, “Friend Request Sent” started appearing next to the profiles of Jerry Reuss, Britt Burns, Wally Backman, Jim Gott and even Mackey Sasser. In all, I hit up 19 former ballplayers on his friends list, including the painful entries of former Atlanta pinch-hitter Francisco Cabrera (ruined my life with a cheap single) and Sidney Bream, the ex-Bucco turned Brave who helped ruin my life by scoring on Cabrera’s bobbling grounder into the high left field grass at Fulton County Stadium in the bottom of the ninth of the 1992 NLCS. We were one out away from the World Series!

Some former players on Benny’s list, such as hurlers Dave LaPoint and Lee Tunnell, as well as former catcher Joe Oliver, had blocking filters for friend requests. You had to know them “personally.” Yes, LaPoint-Tunnell-Oliver and their egg salad sandwich with milk at the lunch counter in downtown Cincinnati’s Carew Tower runs up close to the bling of Derek Jeter, David Wells and Ruben Sierra ensconced in a booth full of supermodels at Tao in Manhattan. Keep ‘em back, bouncers! Tunnell’s got extra bling, rocks and fronts full of ice.
As of last season, Distefano was a bench coach in the Mets organization for AAA Syracuse, so he should be flush with cash and is certainly well-connected to the present day game/industry. Perhaps the Brooklyn native, one of 11 major leaguers from that borough’s famed Lafayette High School, has fallen on hard times? Dare we ask. He got his five pro seasons in and is still renowned for being the last left-handed catcher to appear in an MLB game since the Pirates installed him three times as an emergency fill-in behind the plate in 1989. Must’ve been during skipper Jim Leyland’s smoke breaks.

As Benny’s posts sat on the page, the innocent banter began and Distefano elaborated on getting the glove (prodigious typos are SIC): “I’m 1983 I was in AA Lynn Mass for Pittsburg, pops just retiring and me being a big prospect. Pops took me out on the field for early work and he had the mitt it was huge and awesome. He told me Rawlings made it for him. I think it’s to big to be honest. I don’t know why I asked him for it but I did. He said yes but it will cost me. Ge said I had to buy a case of St Paulie beer for the team on the bus trip. The clubbie told me I owed him 40 bucks the the beer. I was making 900 a month.”

I decided to give it three days and see who responded and in what order, and report back here and perhaps share a nugget or two about what’s on their Facebook pages. Not one responded within the first three hours or so, which wasn’t surprising given the Boomer ages of most of the players I tried to friend.

After three days I heard back from exactly one former player. The rock ‘n’ roll loving Jeff Juden, a Salem, MA, native who pitched for eight different pro teams in his nine-year career in the 1990s. He started with the Astros, ended with the Yankees and had various injuries and lots of trades. He sent me two “thumbs up” icons in the Facebook messenger. Checking back on my list of 19, I didn’t find his name though I do remember it among Distefano’s pal list.

Perhaps it was some Menlo Park-based algorithm that blocked my requests? I could find no way on my own account to monitor requests I had made. Maybe it was because I was sending friend requests directly off Benny’s list instead of clicking on the actual page of the player I was seeking? I don’t know and I don’t want to know. Enough with the FAQ. Just another great example of the garbage time that must be filled between German soccer action (which have been spirited matches worth watching, by the way, especially Jadon Sancho’s “Justice for George Floyd” undershirt hat-trick this past Sunday) and TVG online horse betting, which is still going on because my account has yet to hit the dreaded $000.00 point.

There has also been live tennis against a local opponent who was a former sub-editor at the Village Voice. He had a novel published a few years ago that unfortunately got very little notice. I tracked it down online, ordered it and have been enjoying it as June arrives. Just 20 pages in, author Ralph Sassone set the scene of his young female protagonist who was given advice by her mother prior to traveling to a college entrance interview. She was told to demonstrate she was not living in a “thwarted murk.” That phrase has stuck with me as a partial answer to neighbors passing my porch, asking how I am doing. Well, fine, there’s no baseball or hockey playoffs and March Madness was cancelled and no local soccer in Kingston and my fanzine is dormant. Well, then, I’m in a “thwarted murk” if you must know.

Very few ex-ballplayers have really mastered social media, as if that’s something to aspire to. If they’re too famous, they have to go “the real” route with their addresses after so many fake accounts have been created in their names. Either that or you find their profile and they’re so predictably right-wing 1-percenter that you shut down your curiosity. I have few ex-MLBers in my Facebook friends list of 500 or so. Former Bucco catcher Ed Ott is one, and all he does is post fishing photos. Tried to get him to do a Q&A interview about busting up Felix Milan, but no go. Just another large-mouth bass photo. Fine with me. Instagram is a whole other kettle of Twitter-fish, and I haven’t really delved into either of those platforms and I don’t think I’m about to.

Meanwhile, my newest buddy Juden’s latest was a link to the Dropkick Murphy’s live performance from an empty Fenway Park a few days ago. Nice. Thanks. But no thanks, a little too Boston for my liking. Give me Donnie Iris or Norm Nardini live from PNC Park in Pittsburgh any day of the week and I’m happy.