Nothing wrong with their amateur draft picks. 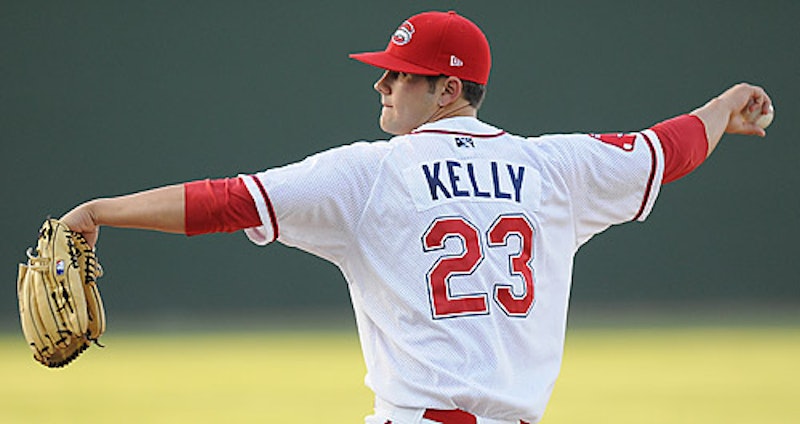 The Boston Red Sox, in the last decade, have maintained a talent-filled farm system. Current “homegrown” players on the Sox roster include: Jon Lester, Dustin Pedroia, Kevin Youkilis, Clay Buchholz, Jacoby Ellsbury, Jonathan Papelbon, and Daniel Bard. This year, the organizational standout is young right-hander Casey Kelly, who is putting up promising numbers in Double-A, while experiencing a few bumps along the way. At first glance, it appears that Kelly is the only blue chipper in a group of youngsters often noted only for their depth. What the Red Sox organization lacks in top-flight talent, it makes up for with high upside players.
Anthony Rizzo is a 21-year-old first basemen currently playing with the Double-A Portland Sea Dogs. Scouts consider him a defensive whiz with glove that’s MLB-ready. After some early season growing pains, Rizzo has put up a respectable .269/.321/.478 slash line to go along with 14 homers. More recently, he earned the Eastern League Player of the Week award and drew a lot of interest from other teams before this year’s trading deadline. After winning a battle with Hodgkin’s Lymphoma, Rizzo grew more determined to make it to the Major Leagues so he stepped up his workout regimen, which added some pop to his bat. While it’s still uncertain whether he’ll be able to hit more intense breaking balls, as he has struggled with them in the past, Rizzo possesses tremendous upside and has a very high ceiling.

Lars Anderson, another first baseman in the Sox farm system, is more of a question mark. While he’s had promising years in the past, Anderson’s been an offensive dud in the past two years. Prior to the 2009 season, ESPN’s Keith Law ranked him as the seventh best prospect in all of baseball, praising his patience and power. While Anderson is still taking walks, the power has vanished, with only seven home runs on the year; but what’s most alarming is his contact rates. Currently in Triple-A, he’s saddled with a .241 batting average, which is puzzling, because in 2008 he hit .316 in Double-A. For now, Anderson has lost his elite prospect status, but that could change with a long hot streak. Some scouts think that his prolonged slump is mental, so it’s possible he could turn it around if he gets his head on straight.

Jose Iglesias signed as an amateur free agent with the Sox last summer and has impressed a lot of scouts so far. Considered a future gold glover, Iglesias’ bat is his only mystery. There’s almost no chance he’ll add any substantial power to the Red Sox in the future, but he has hit for average with Portland. If he could hit .280 and become more patient at the dish, even without a lot of home run or doubles power, Iglesias could be a very valuable player because of his defense. Still only 20 years old, Iglesias has time to develop into a better hitter and polish his defense, and he’s expected to make the bigs fairly soon.

The Amateur Draft this year was a huge success for the Red Sox. GM Theo Epstein’s first four picks were high upside college players, including Anthony Ranaudo, a right-handed pitcher who many scouts considered the second best player available in the draft before the college season began. After an elbow injury, Ranaudo’s stock fell harshly. The Sox drafted him as their 39th pick and were pleased to see him throw nearly 30 scoreless innings in the Cape Cod League this summer. Scott Boras, the nemesis of general managers throughout baseball, represents Ranaudo, so signing bonus negotiations will go down to the wire, but if the Red Sox do ink a contract with him, then they will instantly add another high class pitcher to their farm.

Sometimes there’s too much emphasis on a Major League team’s farm system, since so many “sure things” don’t pan out, but for the Sox, a team that prior to the Epstein regime didn’t work the draft and overseas market well, it’s a positive change.