The Orioles may finally be pulling it together 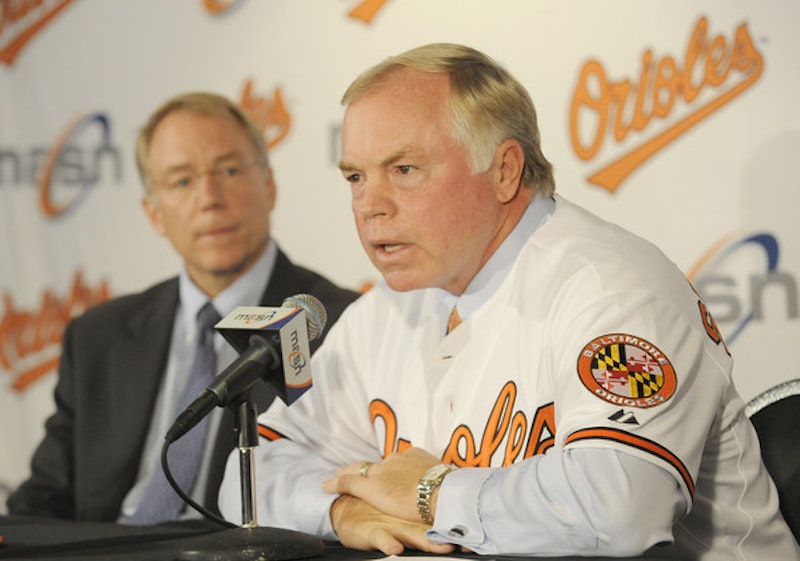 So this is what those bastards in New York and Boston have been crowing about for the past 12 years. I'd forgotten how fun it can be to have a winning baseball team in town. It's just nine days but I'm hooked.  The Baltimore Orioles have gelled with the hiring of manager Buck Showalter, the return of Brian Roberts and Felix Pie, and the young starters finding the strike zone.

Showalter is getting a lot of credit for the reversal of fortune, and rightfully so. He's made it clear that everyone is playing for a job. If you want to be a big leaguer, you'd better play like one. The most drastic change has occurred in the pitching staff. After scuffling through the first four months of the season the starting pitching has shown dramatic improvement since Showalter’s arrival.

In the last eight games O's starters have walked a total of just 12 batters in 62.2 innings. Could GM Andy MacPhail's “Grow the arms, buy the bats” philosophy be coming to fruition? Perhaps Brian Matusz, Jake Arrieta and Brad Bergesen have benefited from being battered around the AL East, baseball's shark division. Maybe Kevin Millwood's stay on the DL did him some good. Jeremy Guthrie has apparently regained his 2008 form. The real test will come in the off-season. If the Birds can finish strong and the pitching continues to develop, MacPhail will need to pick owner Peter Angelos’ pocket and attract a couple of free agent bats. The team still needs stable players at first, third and short.

The return of Roberts and Pie has proved invaluable, since both inject some necessary speed into the lineup. Their presence has changed the team from a plodding station-to-station offense to a more up-tempo aggressive team that can go first to third. Roberts’ patience atop the lineup has also allowed the team to get a better look at opposing starters and get into opponent's bullpens before the eighth inning. Opposing managers have often been able to go directly to their closers or top set-up man to finish off games against the Orioles. Roberts and Nick Markakis at the top of the lineup will make pitchers work.

I'm not naïve enough to suggest that the recent success is a result of Showalter's hiring, but he's certainly played a part. I'm also don’t think that the team will continue to play .888 ball for the rest of the season. I'm just going to enjoy it while it lasts and pray for a fruitful Hot Stove season.