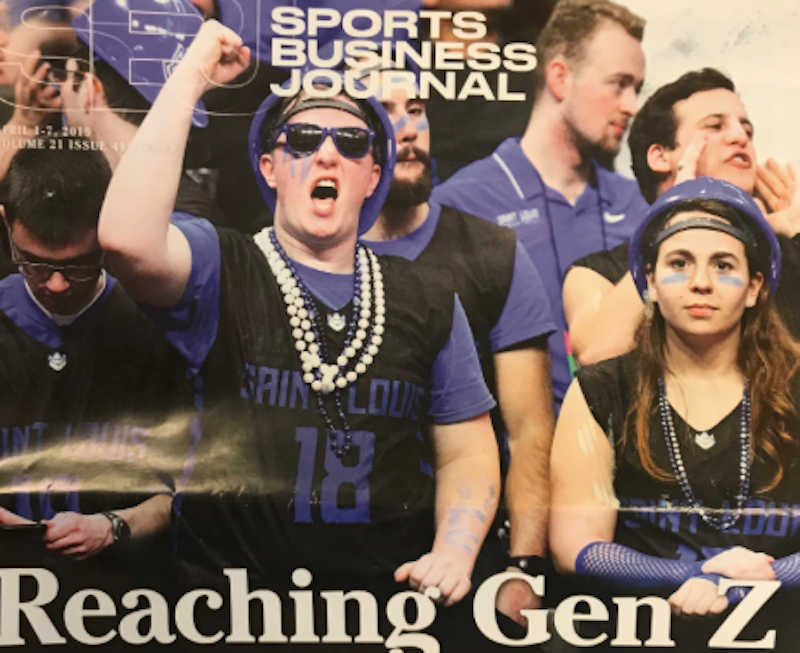 I read a trade magazine called Sports Business Journal. Have for years. Trade mags paid my way for an employment transition from Appalachia to New York City back in the 1980s, so I’m eternally a grateful consumer. Any industry, no matter what, I will respect the trades. I’m the guy standing at the local pizza shop of our leafy upstate village reading Pizza Today, which the owners leave on the front windowsill alongside some other consumer mags. My order has been ready for several minutes, but I stand riveted by a scathing op-ed penned by a major cheese importer.

These days Sports Business Journal is only online and they send you an email with the latest stories, many of which are repeats. For a sportswriter during a sudden time of zero sports and ensuing economic cataclysms, get a load of these headlines from a random Thursday afternoon update:

Other than that oddball UFC announcement, this is basically the captain’s log from the latter days of the Russian submarine Kursk as flashfires rob his crew of remaining oxygen just 300 feet beneath the surface of the Barren Sea during maneuvers in August of 2000. That fall, I was gainfully employed at a dream job writing voiceover copy for Major League Baseball Productions. They’d just moved from their somewhat underwhelming facility near a Burger King in Hackensack, NJ, to a glam production space and studio in the upper floors of the just redeveloped Chelsea Market in Manhattan’s far West Village. Millions were spent in the retrofit of two floors of the old Nabisco building, one of which contained the offices of the nascent MLB.com, the website, replete with a zany indoor batting cage because remember this was the late-1990s and tech startups always had to have quirky offices and CEOs riding Razor Scooters through open-office lofts with ironic pinball and ping pong tables in the reception areas.

For the audio engineers working on MLB’s recording studio and voiceover booth, there were many technical snafus due to the shape of the room and the size of the mixing board, etc. The architects had insisted on a mixing room with doors that had portholes for windows. For many weeks the highlight show I was working on had to record at remote locations because of the annoying construction delays at the Chelsea facility. Because of its round windows and because the Russian submarine tragedy had been in the headlines, me and a few producers of the highlight show nicknamed our inoperative home facility “The Kursk.” The name stuck, also a bit of a nod to the money-burning politburo that was MLB, and throughout the rather eventful 2001 MLB season, “we’ll meet in the Kursk” became standard language among the robust crew at MLB Productions.

Up to this point, I’d spent several years before the mast at various obscure trade magazines in the Times Square publishing district. Now I was preaching to my own choir with a handshake deal with MLB but was unaware of the white-dude snakes from NBA Entertainment who’d ensconced themselves at the top of MLB Productions. I tolerated them as superiors but found them cringe-worthy in their awkward efforts to appear “down with hip-hop” culture. I kept my distance, fell slightly out of the loop, and when push came to shove in the spring following 9/11, my handshake deal was among the predictable rubble of World Trade Center building 7. See you later, Midwestern guy non-pushy alligator.

It’s for this reason I’ll never forget Cristian Guzman. He was a Dominican shortstop with the Twins during the turn of the century. In fact, the Twins got him from the Yankees in the it-took-forever Chuck Knoblauch trade. We were at an editorial house in the less-clubby section of Chelsea for the final cut of the highlight show and Guzman was in it. I’d correctly written copy for the voiceover guy Tom Hargis to read Cristian Guzman (phonetically Cris-T-Ahn Guzman). All of a sudden the coked-up shooting-guns jarhead online editor stops tape and says, “That’s wrong, his name is Christian” pronouncing it as one would the religion. Woah, woah, woah, here Chooch. How many games have you watched? Tempers began to flare. We were up on a deadline. Everything had gone fine up until this copy point which set me off because I knew I was right. My pronunciation, in the end, stood correctly after producers made a few insulting calls to verify it.

Sheesh over here with the waste of time and the Twins PR guy laughing at the inquest. Turns out this online editor guy was a “made man” among the NBA Entertainment types and how dare I cross him even though he didn’t know crap about baseball, especially then-obscure shortstops for the Minnesota Twins. Forget the fact it was not his job to be the Accuracy Sheriff of voiceover copy.

So the following spring I was called into the big office for what I thought would be an official hiring on full-time non-freelance status with benefits. This would cement a fruitful future of Manhattan-based writing employment—the Big Leagues. Instead, the meeting became a Hubert Selby outtake—they said my show was cancelled and I was told to walk because of my insubordinate behavior to this douchebag online editor who took his Napoleon complex all the way to my bosses to complain about the Cristian Guzman incident. Wow.

This was some heavyweight disappointment. So long I’d toiled amongst the trade press and fringes of journalism when suddenly I had access to an area where I had bona fide expertise and passion for the subject/product. I felt I was being rewarded for all those years at the trades. But then it all turned on a dime mostly because of a moot pronunciation dispute.

The instability of TV work had struck before at my previous writing gig for Classic Sports Network. They were an independent media organization in New York with a niche marketing goldmine that soon attracted Disney to buy up the whole lot and call it ESPN Classic. I’d written an article for a trade magazine about the network’s promo department where I found an old college buddy working as a producer. Within a month of the trade mag piece, he got me a full-time gig at the network with an office in the Flatiron district. I came in kind of late on that deal, but the Disney buyout was generous even to latecomers. The deal on the table: you could take the buyout money and run or stay on with the outfit and relocate from New York City to Bristol, Ct., to the somewhat lame ESPN campus.

No thanks, said I to the Connecticut dorms, and being one of the older Classic Sports Network employees, took my buyout check to Peter Luger’s and had a nice meal. It was amusing to watch the money flow into all of these 22-year-old Syracuse University grads at Classic Sports. It was, for these kids who didn’t know what stock options were, the sports marketing version of the Lufthansa heist in Goodfellas. Over the interim weeks between the Disney purchase and the decision to move to Bristol, they showed up with flat-screen TVs (their version of a new purple Fleetwood), engagement rings (ill-advised, I told them) and all manner of windfall point-of-purchase bling you can only imagine.

Back in the 1980s at Ohio University’s E.W. Scripps-Howard School of Journalism (where I first met the aforementioned pal who got me in at Classic Sports), I remember a spring semester magazine writing workshop class held at a local bar. The professor was Byron Scott, a heavy hitter on many fronts and went on to make noise at the famous j-school at the University of Missouri. “Look to your left, and your right,” Scott said. “One day, you will give each other a job. You will help a fellow writer out. There is nothing more valuable than that,” he said, scratching his beard as we downed pitchers of Stroh’s beer. He was so right. Professor Scott also said, off the record, that being able to out-drink your sources will have its advantages. Much of that was confirmed in the writing of some of my New York tabloid heroes such as Jimmy Breslin, Pete Hamill, Murray Kempton and Juan Gonzalez.

Looking back, which is obviously my current mode during “these uncertain times,” I’m happy I chose this trade and kind of stuck with it. Proud, in fact. I wonder if Pizza Today is hiring?