MLB resorts to online videogaming and it’s no Claire Danes. 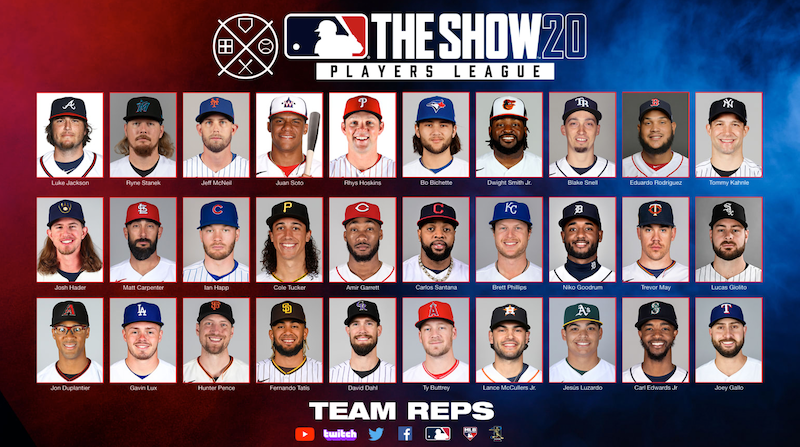 They’re calling it the “MLB Players League The Show” and it was on something called Twitch.TV online. I made the mistake of justifying this current bizarro world of no live sports by following along as Cole Tucker, a barely legal shortstop for my Pittsburgh Pirates went live online Monday night. A guy I used to pay money to see play live I was now watching for free on my desktop computer as he played a video game against other PROFESSIONAL baseball players for Chrissakes.

Tucker, who was raised as a grinning superbot of the middle infield in a pod in Phoenix, Arizona, played online against Ian Happ of the Cubs and Hunter Pence of the Giants for live three-inning contests in which fans can watch and interact with their video game online. Tucker wasn’t too sure of himself in terms of the technical aspects of the video game, and that’s fine since he’s a professional athlete and not a basement-dwelling dork hater/wannabe with too many coding skills. This is what we have come to. This is what this fucking virus has done to the once-Wide World of Sports that is now online geek voyeurism.

It flashes before your eyes sometimes. Watching Frank Robinson player/manage the Indians inside the enormous Municipal Stadium by Lake Erie, seeing Dale Berra, Mike Easler and Ed Whitson make some noise for the AAA Columbus Clippers, sitting in very good seats with the Amish watching the Phillies at the Vet, being in the left field stands at Yankee Stadium as Graeme Lloyd charged in from the bullpen to brawl with the O’s and two years prior being in the upper deck in the Bronx for Doc Gooden’s no-hitter against the Mariners.

There was plenty of World Series action attended in the Bronx as well as Ramiro Mendoza’s debut at the Kingdome in Seattle. During the early-season MLB labor strife of 1995 I went to the bullfights in Cuidad Rodrigo, Spain, and have watched games at Wormsley and Taunton Cricket grounds in England. There was plenty of soccer to see. Olympic Stadion in Berlin, old Wembley Stadium in London as well as matches at the Shed, the Den, Craven Cottage, Loftus Road and Upton Park. Throw in for good measure the U.S. National soccer team in Orlando, the Tartan Army at Giants Stadium for a friendly against Colombia, a few Stanley Cup playoff games at the Garden, at least two MLB All-Star games, a Rose Bowl, the Little League Classic in Williamsport, NASCAR at the New Hampshire Motor Speedway and…a flea circus.

And I would trade my trusty Volkswagen Golf and two of my three garden sheds for just 14 seconds of live sports from any and all of those leagues and venues. A routine ground-out to short would be glorious.

So we’re vulnerable and instead I’m subjected to the disjointed headphone-wearing monologue discourse of Millennial MLB stars like Cole Tucker, the Pirates PR dream who is a smiley, happy youngster shortstop prospect who took me away from binge-watching Showtime Homeland episodes for a night. Homeland is basically the smoking hot Claire Danes always on the verge of tears with straight hair and Mandy Patinkin power-walking down various hallways in various official buildings or compounds. That’s the whole show.

It’s amazing to me that the Player’s Union of MLB agreed to let this online video game tournament progress with player’s engaging with fans directly and without PR influence or any other vetting. This means cuss words, and many of them in the case of Tucker, because these kids are so comfortable on various social media platforms. Only a few trolls set in with ownership goading during Monday night’s three-inning “The Show” contests involving youthful volunteers from each franchise. By 8:30 p.m. EST most clubs had players who engaged in at least three online contests, but for the Pirates, Tucker continued on for a technical mumbo-jumbo of social media frankness that seemed at times dangerously unguarded.

Uncontrolled trash talk, no editor, as Tucker tried to figure out his headphones and his interface with the live chatroom. I was astonished as Tucker’s peers checked in online with the comments under slightly disguised user-names. Mitch Keller, the pitching prospect, checked in during real-time with robust hellos. Will Craig, a power-hitting cornerman for the Bucs, logged in with some type of Facetime with Tucker while he was visible online via the Twitch.TV feed., creating some sort of infinity image. I watched as the scene on my computer was becoming the Max Headroom of Millennial MLBers, future millionaires stuck in the COVID-19 quarantine and not quite sure of the parameters. I’m sure old school MLB PR guys were probably shitting themselves by the live nature of the interaction, with all of them anticipating their own “What is the Frequency Kenneth?” moment for each MLB star online.

I noticed Tucker had the savvy to avoid the Pirates anti-ownership bile in favor of the more saccharine queries about his musical tastes. I confess I was the commentator who reminded all fans that Roberto Clemente’s body was never found.

I noticed there were plenty of Astros jokes and anti-ownership bitterness from Pirates fans online, some of whom told Tucker he should turn out a few lights in his Arizona residence to save a few dollars. This stuff flew left and right with no sign of censorship or blocking. Around 11:10 p.m. one of Tucker’s local bros suggested they go get some fast food, so he awkwardly signed of Twitch.TV after setting up a minor league contest from his Indianapolis Indians AAA days against the Buffalo Bisons. His own avatar flew out to center field and then he clumsily signed off to meet his buddy for nourishment.

By Sunday night, a day before I logged on, MLB.com was already pushing the youthful element of the participation. Twitter, Facebook, YouTube and now Twitch. Still waiting for a multi-fast streaming service called “Seizure” so we can all just die a little with each humanity-hating tech start-up.

I liked that some young participants on the Pirates streamed video games were schooled in the ownership history and how Mark Cuban once wanted to buy the Pirates but he was basically blackballed by the old gray network who deemed him too young and too radical. Good time to bring that up, if you ask me.

Direct marketing, if you will. Shark Tank in your face, Boomer.

I might stay active on the Twitch.TV feed to remind young Pirates fans of our older problems. I might consider it a mission, at this point, given what has presently been stripped away from my world and given the amount of time I have on my hands.

Here is a somewhat random selection of the chat cue with Tucker lifted from Twitch.TV on Monday night:

herealtakai: How did you get picked to play in this?
sekkusumon: BANG BANG BANG
BrettKot4567: Would you cheat to win a championship?
dant2120: Go to diamond dynasty
Dudeman2271: It might have you on AAA rn
n0ck_g: MS WILEVER THE GOAT
ryan_fernandezz: Have you ever hit at Lou Frazier’s?
dougouts123: what do you think abt the astros thing
njrini99: Was she hot
chef_cookiekc: I'll serve you meatballs I promise
lemur234543: Jeter, or Ripken Jr?

So I guess this will continue. I can’t see MLB letting it remain as anarchic as the first two nights were. They’ll certainly call in the Department of Home Plate Security.