The NFL’s New Policy Was a Necessary Business Decision

Taking a knee never accomplished anything. 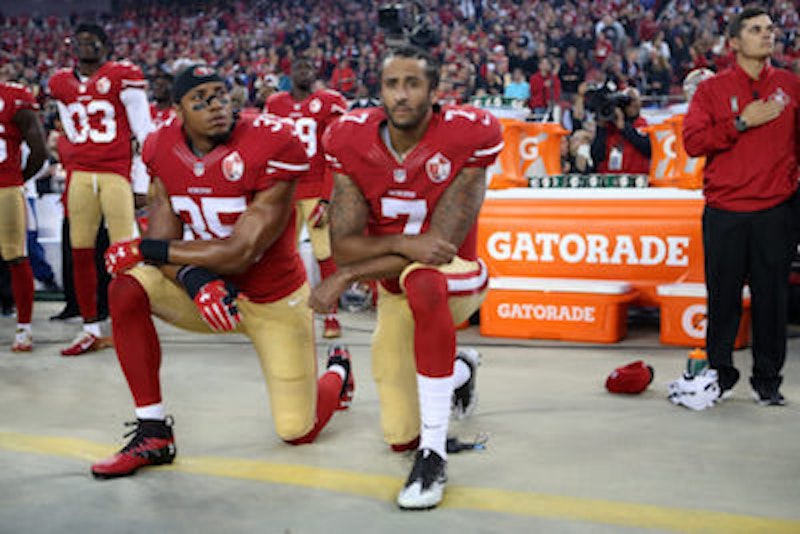 After the NFL struck a blow against its players kneeling for the national anthem last week, The Indianapolis Star ran an op-ed declaring that the league now “enslaves black players and fans.” Golden State Warriors head coach Steve Kerr’s reaction was, "I think it's just typical of the NFL… It's idiotic... I'm proud to be in a league that understands patriotism in America is about free speech, about peacefully protesting.”

The “enslavement” that Justin Mack (who’s black) refers to in his Star piece is the NFL’s new plan to fine teams when their players take a knee during the national anthem, as former 49ers quarterback Colin Kaepernick and some others did over the past two seasons. How the new policy will also enslave football fans, he didn't explain. The NFL’s decided that players can choose to remain off the field until the singing’s over, meaning nobody's being forced to “do” anything. Mack knows this, but he still decided to conclude his piece with this turgid prose: “Being forced to stand, or forced to do anything at all, makes this the land of the partially free and the home of the enslaved.”

Kerr’s NBA that values free speech so much requires players, who must be on the court when the anthem’s played, “to stand and line up in a dignified posture... during the playing of the national anthem.” The last NBA player to sit for the national anthem was former Denver Nuggets shooting guard Mahmoud Abdul-Rauf (formerly Chris Jackson) during the 1995-96 season, and the league fined him $32,000 and suspended him for a game.

The NBA forces its players to stand, yet Steve Kerr's diatribe won him praise as a free speech defender. Mack’s claim that for people at work “to be forced to do anything at all” is tantamount to slavery suggests he’d only be satisfied in a world where everyone, like Herman Melville's “Bartleby The Scrivener,” is free to say “I'd prefer not to” when the boss tells them the meeting’s in 10 minutes.

Matt Johnson recently wrote a piece for Splice Today criticizing the NFL crackdown that’s coherent, though I'd submit it's off the money on some crucial points. Johnson claims “the NFL decided free expression isn’t worth all the trouble,” and calls the league's decision a “mistake” and “cynical.” But very few businesses, including pro football, care much about their employees’ right to express political opinions at the workplace, especially when they’re broadcast to millions and the American flag’s involved. Businesses exist to make a profit, not to promote individual liberty. That's why Domino’s Pizza won't let its drivers deliver pizza wearing a MAGA hat. If, however, one did come to Steve Kerr’s house wearing the red cap, you’d have to wonder how concerned the coach would be about that person’s right to free expression.

It’s too early to tell whether or not the new rule is a mistake, because it’s a business decision, not a moral one. Maybe the NFL should’ve done nothing, as fewer and fewer players took a knee last season. There are some indications that this new policy might produce a backlash among the players, but the NFL was concerned that Trump would pounce again as soon as the next player took a knee, so it chose to act preemptively. That's the reality the league's front office faces, not one in which they're acting as a force for good in battling the president's bigoted leanings.

A firm protecting its brand isn't “cynical”—it’s self-preservation. It doesn't take that many incidents to lead to the condemnation of an entire league, as former NBA commissioner David Stern discovered after Indiana Pacers forward Ron Artest brawled with Detroit Piston fans in the 2004-5 season. NBA ratings declined, just as the NFL’s have for the past two seasons, and Stern was forced to take decisive action to rescue the NBA brand.

Colin Kaepernick made a strategic error by involving the flag in his protest. On his website, it says the quarterback “never realized that last year’s protest of the national anthem would blossom into a national issue.” If this is true, it demonstrates a shocking degree of naïveté on his part regarding the dynamics of political protest. There's a chance that, now that players can't take a knee in protest, they’ll find more effective ways to highlight police brutality against black people. The players, who all have a large presence on social media and millions of dollars at their disposal, certainly have the resources to raise awareness if they're willing to put the effort in. Kneeling for the national anthem isn’t the way to make anything happen.