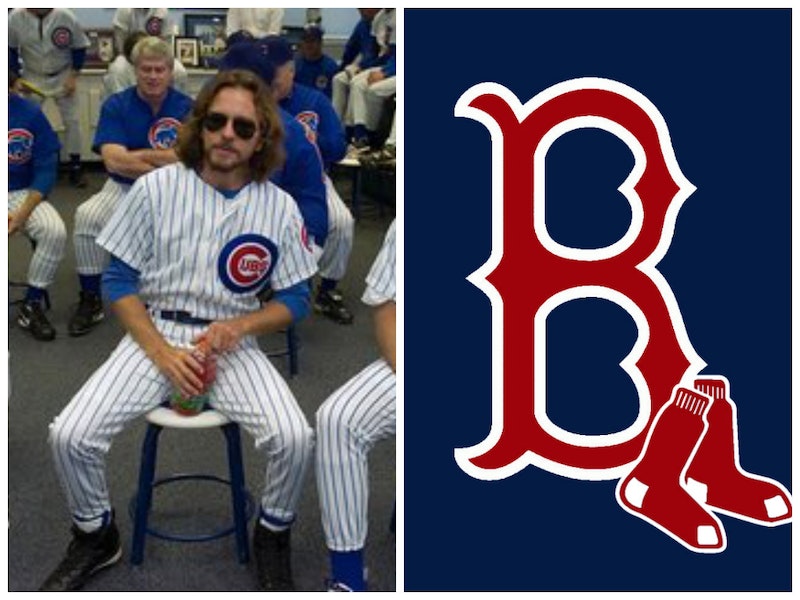 As the Pearl Jam juggernaut prepares to surge through Baltimore, it’s perhaps interesting to note lead singer Eddie Vedder is a bit of a baseball nut. Ultimately, then, he would have postponed the current tour until after the MLB postseason in case his beloved Cubs made the World Series. But of course neither happened.

Vedder is a suburban Chicago native who has among his vast baseball paraphernalia collection the bloodied hat of Kyle Farnsworth after the lanky reliever beat up Paul Wilson of the Reds with plenty of Wilson’s claret flowing over the white home plate of Great American Ballpark. Vedder is no stranger around Wrigleyville, and he once brawled alongside White Sox ace Black Jack McDowell during a muddled late-night drinks fest in a New Orleans bar. At the Pearl Jam concert in Pittsburgh earlier this month, Pirates closer Jason Grilli was invited onstage to deliver a Will Ferrell-esque rant about Bucco fans and next season’s mission for the Pirates. The YouTube footage makes Grilli—standing next to the diminutive Vedder—appear to be eight feet tall. Vedder allowed Grilli to hang out onstage for a painfully long time.

There is something odd about this Pearl Jam tour. It’s had otherwise “normal” people dancing an “Invasion of the Bodysnatchers” transformative jig. The Brooklyn shows were greeted with nothing short of hydrophobia-tinged hype by radio hosts and various music pundits. I saw office managers, bond traders and freelance producer types actually tripping over each other to board an Amtrak train in upstate New York to make the Barclays Center Pearl Jam shows in Brooklyn. It was as if the Beatles had regenerated or The Clash had come back to life. I don’t remember this type of hype back when a ho-hum Pearl Jam was clogging the FM radio airwaves with their relatively mainstream brand of “grunge” rock n’ roll while Eddie made the cover of Time magazine. Maybe their slight absence for the past few years transformed a certain strain of music consumers (perhaps the mind-numbed masses of Dave Matthews followers?) into nostalgia mongers with a moist eye for the calendar pages of 1995.

I remember a female East Village bartender back then telling me Eddie Vedder doesn’t sing. “He emotes,” she said to me over a rack of empty Red Stripe bottles at Sugar Reef. She was playing Pearl Jam again on the sound system. She was supposed to be playing soca or meringue, but no, she just had to hear the guy emote some more. Fellow busboys had warned her about management scowling when the song “Jeremy” played over tables of copywriters trying to wolf down jerk chicken, but she didn’t listen and was soon sent packing. For those who never stopped wearing flannel shirts, it’s odd for the neo-Pearl Jam cult members to randomly approach and ask about set-list predictions for the New Zealand portion of the band’s tour.

So Vedder has the baseball creds. Therefore a Cubs VedderMetric Formula should be used to determine a winning forecast for this year’s World Series. This one is as easy as Nate Silver buying scratch-off lottery tickets at Cumberland Farms: The Red Sox have former Cubs talisman Ryan Dempster, a Canadian who is therefore immune to the pomposity oozing from every pore of the St. Louis organization. Advantage: Boston.

At least the 2013 Fall Classic features teams with the best records from each league. People ask whom I’m rooting for and I say “the umpires.” Extending their uncanny fortune into Biblical realms, the Cardinals have turned every Pirates fan into Job this year.

When the 2013 World Series goes to the seventh game in Boston on October 31, Vedder and co. and all their amplifiers and flannel and Dead Boys covers will be traveling from minor league outpost Charlotte to another AAA stalwart city that is New Orleans. This one will go seven, and Jon Lester will be the “Better Man” and get the win, just as he did in Denver on October 28, 2007 when the Red Sox swept away the Rockies to win it all. For Pearl Jam, 2007 was relatively dormant. They pissed off to Europe for a tidy June tour and then returned to the States for the requisite pair of Chicago concerts. Vedder’s Cubbies, however, had plenty of work to do that summer as they forced headline-writers to use the word “resurgent” and won the NL Central, only to be promptly swept by Arizona in the playoffs.