Oh How I Hate Ohio State 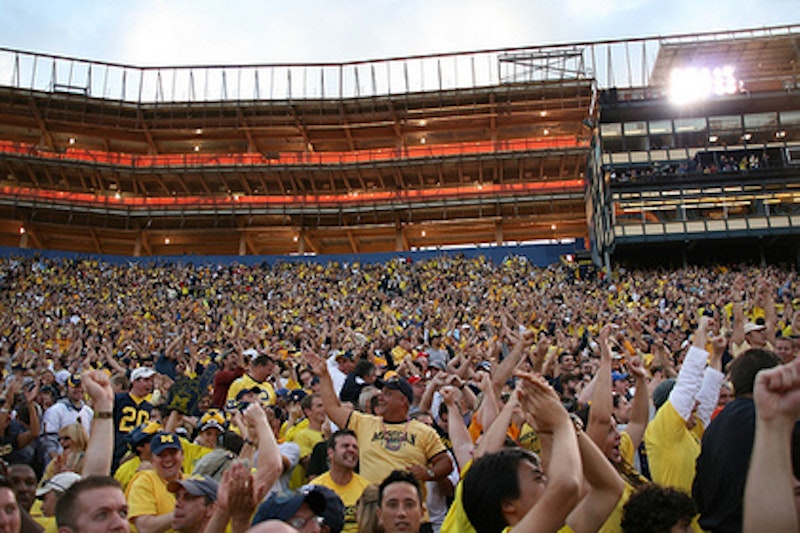 Saying I’ve never dreamed about Michigan football before would be a lie. One’s waking life often makes several subconscious appearances each night, and a massive percentage of my day is devoted to reading, thinking, talking, and fretting about Michigan football. Before this week, the boys in maize and blue had made only two nighttime appearances, once before the 2006 game against Minnesota, and once in August, two nights before this season began against Utah. In both dream games, Michigan lost. In real life, we only lost against Utah, so that means my subconscious is batting .500. I’ve never dreamt of a win before, which tells you a little something about my tortured relationship with the team.

That is, I’ve never dreamt of a win before Sunday. And, well, Monday, too. You see, for the first time ever in my history of dreaming about Michigan football, I had two different dreams about the team in back to back nights. And in both, Michigan accomplished comeback victories against Ohio State, the team’s archrival opponent this Saturday—as a massive 19-point underdog no less.

If you are unsure of this rivalry’s magnitude, then you are most likely not a sports fan. For a quick primer, though, just watch this. Still unsure how deep it runs? Check out any of the countless books written, movies produced, or this indescribable delight.

Yes, a football game that happens once a year between two Midwestern university teams has seemingly as many books written about it as Darfur (okay, not really, but it feels that way). For whatever reason, sports rivalries generate massive amounts of interest. Look at these Red Sox-Yankees retrospectives, there are just as many, and they even have uncannily similar titles and themes to the Michigan-OSU contingent. We love a good sports rivalry. And for those among you who don’t give a shit about sports, this is probably confusing as hell.

First, it should be noted that we, as a nation, do not care about all sports rivalries. In fact, most rivalries spark little interest outside their regional enclave. Take Alabama-Auburn, for instance. Allegedly, it is one of the most bitter, spiteful rivalries in American sports, but there are about 100 less books written about it. There’s a joke about Alabaman literacy somewhere in there, but it’s more than that. Last year, Michigan took on Ohio State and it was watched by a mammoth 4.6 percent more viewers than Auburn-Alabama, which was relegated to cable a week later.

Not to pick on those poor souls, but it’s too provincial. Alabama just doesn’t reach that far outside the South. Ohio State and Michigan’s football rosters are filled with players from California to Texas to Florida to New York. Alabama and Auburn have three combined players—out of 230 total listed—from outside the South, and that’s only if you don’t consider West Virginia the South (which I suppose I don’t). For whatever reason, these schools do not have the fully national appeal of some other sports teams, thus, their rivalry becomes lesser.

So we have two institutions, whether they be collegiate or professional, that have national recognition engaging in a competitive struggle. The national part we have established as important, but just as important is the idea of institutions. Individuals are compelling. Personalities clash in individual sports like NASCAR, golf, or tennis, providing extra storylines to the narrative of competition. Earnhardt-Gordon. Tiger-Phil. Federer-Nadal. Individuals may even fuel two teams into a series of very competitive, exciting games, the best example being the “rivalry” between Peyton Manning’s Indianapolis Colts and Tom Brady’s New England Patriots. These flame out. Retirement or declining ability eventually catches up with these individuals, and they are gone. Once they leave, they take the rivalry with them. Without the cosmetic aid of personality, time washes away these rivalries, especially if one team becomes significantly worse than the other. For instance, what separates a Colts fan from a Patriots fan? What does it mean to be a Colts fan in relation to the Patriots? Did you care about the game as much this year with Tom Brady out? The teams are too distant for even a latent regional component. It is not a rivalry.

Over the summer, I attended an Orioles-Red Sox game in Baltimore. On my way into the stadium, there was an old man wearing a kilt and a Red Sox beret playing the bagpipes. He apparently traveled down for the game. When I arrived at my seats, there were two brothers sitting in front of me, one was about 20, decked out in Red Sox gear. The other was about 10, wearing an Orioles hat. We started talking. They were both from the Baltimore area with parents from Boston, and the older one was saying he couldn’t understand why his younger brother would root for anyone other than the Red Sox. He pointed to his little brother’s blue eyes, reddish hair, and bountiful freckles. “I mean look at this kid,” he said. “He’s Irish as shit!”

White Irish-ness is an integral part of the Boston Red Sox experience. You see almost as many green, clover-leafed Red Sox shirts as you do the normal red and blue. The Dropkick Murphys sing about the Sox. Boston really is known as a specifically white sports city. They were, after all, the city of the all-white Celtics in the 1980s. Barry Bonds once somewhat famously said he would never play in Boston because as a sports town it was “too racist.”

Of course, on the other side of the equation, we have the New York Yankees. The Yankees are the team of immigrants. Yes, I’m sure there are millions of Irish Yankee fans, but the team stands for capitalism (through its excess spending but also excess emphasis on results), cosmopolitanism (its early attempts at getting international players and embrace of a worldwide stage), and universality. There are Yankee fans from all over the country because the Yankees win, their hats are cool and ubiquitous, and you don’t have to be from New York to like them. No New Yorker is ever going to say to someone else at a Yankee game, “Oh, you’re not from New York? Not even a family member? Then you’re not a real fan.” On the other hand, we have the Red Sox fan in front of me who spent 30 minutes trying to justify the authenticity of his fandom because his parents grew up in Boston. And the Red Sox fans next to me grilled the poor kid about where he was from, only to turn away and stop talking to him when they found out he wasn’t from Boston.

It actually makes sense that I despise both of them because you should be able to hate both teams in a true, elite rivalry. To qualify for national prominence, both teams need to be good. More importantly, both teams need be good almost all the time. The best rivalries occur in only three American sports: college football, college basketball, and baseball. These are the sports of inequality. Money and prestige create talent disparities at the top of these sports, resulting in an upper echelon of teams that are always competitive. They may not win every title, but they are always right there.

This continuity is so important. It makes Michigan-Ohio State more relevant, when, like every game since 2002, a championship of some form is on the line. In fact, Michigan has 42 conference championships and Ohio State has 32. The next closest is Minnesota, with 18, and they haven’t won since 1967. Everyone in the conference hates both teams because they are always the best. It keeps adding fuel to the rivalry, giving it history, depth, and importance. Even in a season as awful as the one Michigan is having right now, it is a prize at the end of the year, a reminder of your own worth, because you define yourself through another team, and they through you. It is because you are both lonely at the top, and only your rival’s fans understand what it’s like to be part of that special rivalry.

Rivalry is how we as a society express our differences. This is especially true in Europe with a team like Barcelona representing Catalan nationalism against the central government of Real Madrid. But in America, it is different, more all-encompassing. We have rivalries that are at once local, yet also incredibly national. You do not need to be a part of a fan base to pick a side. Indeed, virtually everyone is supposed to pick a side. Watching the elite rivalries—Duke and North Carolina, Michigan and Ohio State, Red Sox and Yankees—transcends the various sports. They force you to attach a value system to the Good Guys as they take on the Bad Guys. These rivalries are often nearly—or over—a century old. In America, where our history is a relatively short period, our sports rivalries are actually gilded.

Michigan football was around in 1897, playing Ohio State, and if Michigan shocks them this year, it will be the biggest upset in the rivalry’s history. It is the chance to see something real, something tangible happen in an easily understood and relative context to the rest of history. It will be an interaction with 1897, six years before the airplane was even invented, a time that is too far away to make sense. For about three hours this Saturday, you can decide what you stand for, watch history in a way you never really get to deal with it, and observe the hysterics, the passion, the pain of the faithful who spend their time dreaming about victory. It will be beautiful.

Especially if we win.