We Just Want Tom Brady Back

Forget any hopes of a championship; Pats fans just want a hero to root for. 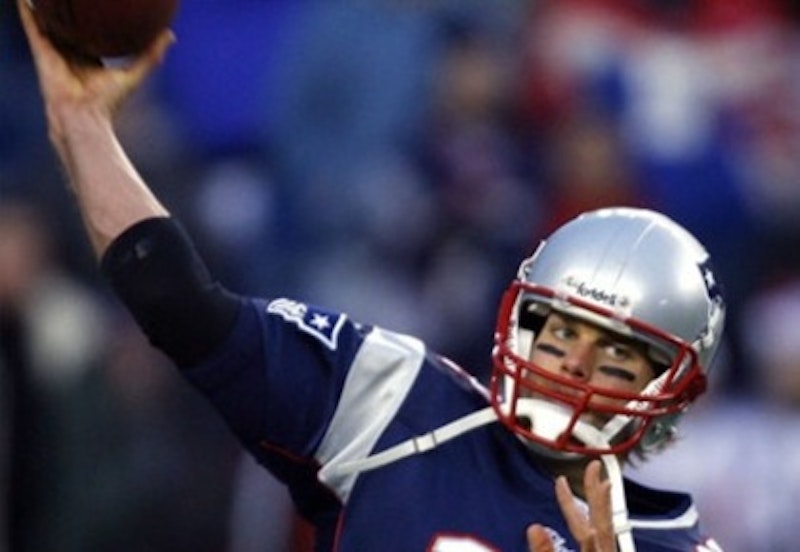 Up until last year, no matter what happened in life, from bad break-ups to botched exams, I had the New England Patriots. The world could be chaotic, but for three hours, I could toss on my Tom Brady jersey and lucky Patriots wool cap and immerse myself in the game. The epic 2007 season was my sanctuary; Brady, Moss, Welker, they were my gods. Then came the miracle of Eli Manning: the mad dash in the backfield, the Tyree head-catch, and the Plaxico Burress reception that brought my personal Eden crashing down.

As the final seconds of Super Bowl XLII ticked away towards that single, brutal loss, my cell phone began to buzz, unrelenting for about 20 minutes. Seventeen text messages and three voicemails, each one from someone I had ragged and ridiculed at the peak of my team’s glory. The messages were punishments for my arrogance; all the chanting, bragging, smug remarks and blatant insults came flying right back in my face with each quiet hum in my pocket. Locking myself in a room, I watched ESPN highlights late into the night. Pure masochism.

But out of tragedy comes the hope of a new season. Most of the 2007 Pats’ crew was back and the humiliating defeat would only make them stronger, more willing to fight toward the goal they had almost reached. I had been glued to pre-season coverage for weeks, enmeshed in fantasy football drafts and YouTube highlight reels. I was ready. Then, in the middle of the first quarter of Game 1, it was over.

There are now four New England sports images that are forever burned in my mind: Aaron Boone’s home run in the 2003 ALCS, Tom Brady’s interception to end the 2006 AFC Championship, the Tyree head-catch, and Brady’s leg bending the wrong way in Game 1.

When Matt Cassel stepped onto the field, New England lost its confidence. Its “sure thing” was gone. Cassel is inconsistent and inexperienced, but more importantly, he doesn’t have the connection with his receivers that Brady had. Randy Moss has to slow down for Cassel’s passes; Welker has to twist behind to attempt to snag underthrown balls. The only reason Cassel has achieved marginal success is because of the athleticism of these receivers. And although the team appears to be rallying behind their new quarterback, what they say to the press and how they play on the field are two very different things.

Moss is playing the half-hearted football like he did in 2005 as a receiver for Oakland. He’ll break out a long streak every once in a while, but unless Cassel can get him the ball (which is rare) this once unstoppable player is useless. His competitive fire is gone. He knows this is not another record-breaking year and he’s playing like he’s given up hope. Moss and Brady made each other superstars. They were the most destructive duo in the NFL and once that connection was broken, the result was mediocrity.

When Moss took the podium at the press conference following the Kansas City game, his usual rambunctious demeanor was gone. He talked about constantly looking over toward the locker room, waiting for Brady to come back, but he never did. That speech carried the equivalent emotional punch in the stomach as Billy Dee Williams’ in Brian’s Song.

The ensuing death rattle of the New England Patriots truly demonstrated what an integral link Brady served as a team leader and player. He was a player who could control the game under any circumstances, and the team would rally around him. One needs only to look at what he was able to accomplish in 2006 with the JV receiving squad of Troy Brown, Reche Caldwell, and Jabbar Gaffney; he took them all the way to the AFC Championship. The downfall of the Patriots, despite a stellar defense and record-breaking dream team of receivers, exemplifies that the three New England Super Bowl titles were largely Brady’s work.

I know that Patriots fans will gather no sympathy from any football follower in the world. We’ve had our dynasty and we mercilessly slaughtered just about everyone in our path. Our head coach Bill Belichick is a little scowl-faced ragamuffin in a torn-up sweatshirt. His unyielding strategy of running up the score, his cold and emotionless attitude toward the press, not to mention the explosion of the Spygate scandal, which cast a shadow of doubt over each one of New England’s victories, has established the Pats as the “bad guys” of the NFL. And I’ll be the first to admit the fact that the Patriots rank right up in the top five of having the NFL’s most annoying fans (along with the Jets, Giants, Eagles, and Steelers.) But in the face of tragedy, we’ve reached an era of humility. We don’t need or expect your sympathy; we don’t even want it. We just want Tom Brady back.

So what’s next? The Patriots have been on-and-off thus far, and while playoff potential is viable, it doesn’t seem realistic to expect Matt Cassel to lead his team to the top this year. As Patriots fans watch their team ruthlessly dominate one week only to be blown out the next, they can only sit back, let it play out, and wonder what could have been if Bernard Pollard didn’t take that extra little leap at Brady’s knee. Contemplating the alternate history of “what could have been,” I imagine the resurgence of the Patriots-Jets rivalry, made potent again by a showdown between Brady and Favre. I dream of the Patriots settling the score with Indianapolis and watching Peyton Manning sulk his way to the locker room. But back in the dark, scary place of reality, I’m forced to watch all the potential re-broken records and all the shots at redemption shatter, with infections growing from each new attempt. And until Brady walks back on the field and shows the world that he’s the same player he always was, I’m forced to accept that the glory days of the New England Patriots are over.