Lost in a Blitz of Orioles Orange

Nuts to the misanthropes who belittle sports fans. 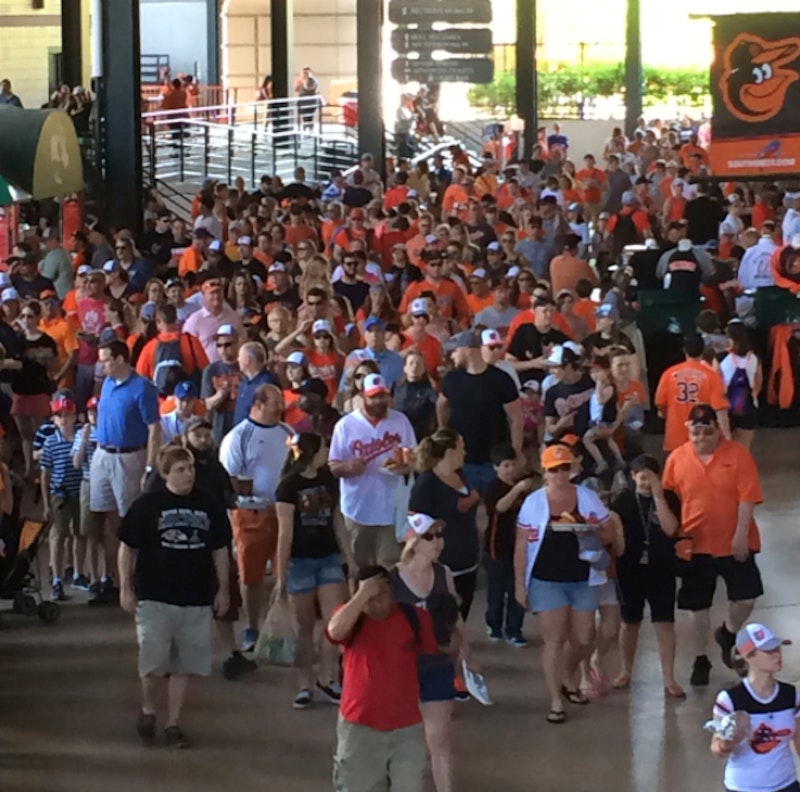 It wasn’t even four years ago that you could mosey down to Baltimore’s Camden Yards the day before a game and have your pick of seats, in any section of the magnificent ballpark. In spite of ham-fisted, penurious owner Peter Angelos, the O’s are now a competitive team in the AL East, but I was still mightily surprised Saturday morning to find out the Mother’s Day contest against the Astros—the Astros!—was a near sell-out, and so my wife, two sons and I settled for the dregs, two different rows with a less than a optimal sight-line. Upon arriving Sunday, it was a benign mob scene, a crush of orange and every other spectator was wearing a Jones, Davis, Markakis or Wieters t-shirt or jersey. Even the line for the escalator up to the second deck was stalled, as the attendant was mindful of controlling the pandemonium, permitting a set allotment of people to travel upstairs at one time.

This spectacle—befitting the second sellout of the season—was welcome, for as a resident of the city it was reassuring to know that all the surrounding businesses near Camden Yards would reap a bonanza from besotted O’s partisans, and my wife Melissa and son Nicky, who root for the home team, snickered at me and Booker, since we’re Red Sox fans who don’t wish the O’s well. We had to keep our pleasure at seeing the Astros slam putative Baltimore ace Chris Tillman in the first inning—Houston ultimately won 5-2—at a low level since an ugly confrontation (which, in fact, is not often Baltimore-style; that’s ceded to Philly) on Mother’s Day would dampen Melissa’s mood, as she was having a grand time cheering and dancing and even singing along with the ever-dreadful O’s theme song “Thank God, I’m a Country Boy.” (This saccharine tune made popular by the late John Denver has been a staple since the late-1970s, and why, I’ve no idea: it’s not as if modern Baltimore abuts Appalachia.)

Anyhow, it was a lovely day at the ballpark—though I’ll sheepishly admit I had one eye on my iPhone, checking the Sox-Rangers game, rather than gabbing with other spectators in our section—and it got me thinking about how churlish some people are about the big business of sports and the wealthy athletes on the field, as if they’re any different from the actors on screen at your local multiplex. Going back a ways, I remember seeing Barry Bonds hit a monstrous homer in an inter-league game at Camden Yards, and it was a thrill just to watch Mr. Pumpkin Head play. A friend who accompanied me, after Bonds’ blast, was disgusted, saying the man was a “disgrace.” Don’t agree: as someone who believes PEDs ought to be legal—let the player take the health risks if he so chooses—watching Bonds, Roger Clemens or Manny Ramirez was great theater. Sammy Sosa, Rafael Palmeiro or Mark McGwire? Never bought into their toting up of stats, but Bonds and Clemens were terrific to begin with.

Last month, Rod Liddle, a British columnist I usually enjoy, wrote a churlish paragraph about modern sports in The Spectator that would’ve had many heads-a-noddin’ among his American brethren:

Football at the very top level has become so horribly precious, so pretentious and pompous these days, that I am glad I have nothing to do with it. So many egos to be massaged, including those of the fans who, to be fair, pay extortionate amounts of money to have their desolate lives lifted by the acquisition of trophies by other people.

Jeepers, what a grouch! Mind you, Liddle dedicated the first portion of his column to a football game he went to the day after Easter—Millwall vs. Doncaster—describing how he had to beg, cajole and bribe his younger son to tag along with him. So much for his having “nothing to do with” the sport. I guess—along with Liddle—that I lead a “desolate life” because I find following baseball, and the Red Sox in particular, for six months of the year an entirely worthwhile expenditure of time. There’s a rush when the Sox win a game, especially a tight one or a walk-off, that’s not unlike snorting two lines of cocaine. Translated: the excitement’s over in a flash, and then you worry about the next day’s game. It’s true that the money spent at a sporting event bears no resemblance to when I was growing up, but that’s entertainment today, and though I suppose there are some fans who live vicariously through the accomplishments of their favored players, unlike Liddle, I’d say they’re in the minority.