My Kingdom for a Horse 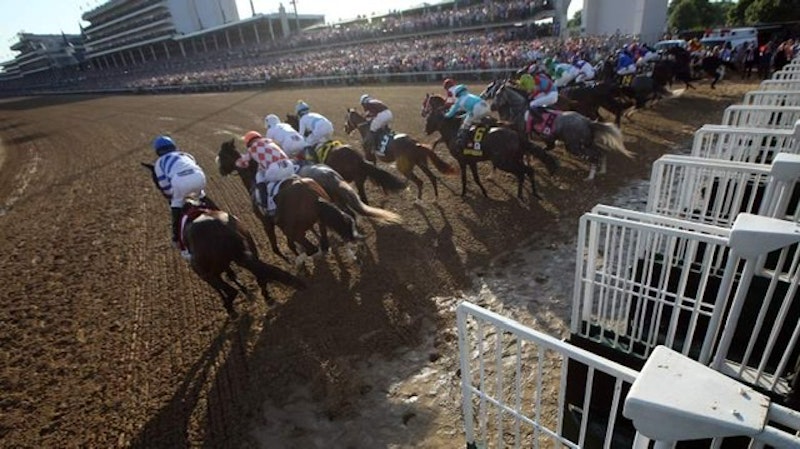 One year ago, on Kentucky Derby Day, I failed to get a bet down and missed out on a $2600 payday. You can hear these failed-to-get-the-bet-down-on-the-eventual-winner stories on any street corner in any given East Coast city for the past 200 years. I don’t sweat it much now, but it was agonizing last spring.

A co-worker railed at me for not going digital or using the phone to place horse bets. “Why do you go in person?” he asked, perplexed. I had no answer.

Last week after flipping through sports cable networks choked with nostalgia programming I came across NBC Sports Network “Trackside Live” and it was indeed a live feed from TVG—the horseracing network for track insiders that began back in 1999. They were bragging about how the Arkansas Derby has been saved and will run at Oaklawn Park and will actually be two races live, but with no fans at the facility. I watched a few races and had forgotten until then how much I used to enjoy horse racing. Then a TVG promo came on pushing their online betting and mobile device wagering app. They said it was easy. I could still hear my co-worker’s incredulous tone about my missed bet from last year. The promo was correct. It was easy to set up this online betting and it has been a lock-down, stay-at-homegamechanger.

It was last May 4 when I tried to visit my usual Off-Track Betting outpost in the Kingston Plaza strip mall across the Hudson River in Ulster County. It had been my go-to on Derby day for the past 10 years or so. Most times it was no trouble but sometimes there were pencil shortages and parking issues and always, like every house purchased by city folk upstate, an ongoing renovation. It’s still an awkward ritual to get in there, find the slips, find the code from the analog-dwelling New York Racing Association, and fill in the SAT test boxes properly.

Then it was time to deal with the surly window attendants who tell you the paperwork wasn’t necessary. (Not what they said the last time). My old superstition was always bet “to place” and make sure the OTB attendant taking your wager is female. It worked in Brooklyn Heights where the toilet was always backed up. It worked in the Garment District where rag trade psychos had lunchtime duke-outs. NYRA’s OTB continues to be operated in the shoddiest of fashion, probably still as corrupt as when 20 years ago it became known as the only bookmaker in the world to actually lose money and keep running.

In 2019, I knew things were different as soon as I approached the wagering facility. I was three hours early, but the line had already snaked outside the door of the Kingston Plaza facility which is in probably the 14th saddest strip mall in the Hudson Valley. (Ellenville has the third saddest). When I approached the anti-social line I only had to eavesdrop (never ask) to learn there were only two window attendants working on Derby Day and the regulars were preparing to riot. I’d gone to the OTB storefront leaving my 14-year-old daughter and her friend in the car, sparing them the Tom Waits trauma of displaced track guys, their downtrodden human condition, and the overall vibes of desperation. You see, the Derby trendies who come to the OTB once a year were overloading and interfering with the local everyday OTBers who camp out and bet endless Monticello and Goshen sulky tickets all day. Rage was in the air.

By the time I’d cemented a place in the rag-tag queue I heard sirens and the Kingston police were arriving. Apparently an OTB window attendant had overloaded on death threats and someone called the cops. The line to get in quickly disbanded with a Marx Brothers style bum’s rush out the door and into adjacent stores to hide. I heard “40-minute wait to place a bet” and surrendered for the first time in I don’t know how many years, taking my $100 home to feed my family and into my daughter’s college fund. Then I had to drive my daughter and her friend out of the skell-filled strip mall parking lot for yetanother survival experience as cop cars passed us going the opposite direction.

At the time I had a gig as a color commentator for the online broadcasts of the local semi-pro soccer club called Kingston Stockade. I also published a fanzine in support of the club, distributed free to any who wanted one in the parking lot before each match. Since the home season usually started on Kentucky Derby Day, I’d include my betting pick in the zine for kind of a crossover-sport type of deal and especially because the Kingston OTB was so close to the soccer stadium. In issue 3 from May of 2017, I recommended punters go for a horse called Gunnevera, who would come in 7th. Last May 4 in the 13th issue of my zine The Fence Post, the inside cover had this smallish item: Fence Post Kentucky Derby Pick: Country House to Place. Full moon means play a longshot; Country House is in the 20th pole position—the last horse to be loaded. Fact: If it weren’t for a country house, Stockade FC wouldn’t exist, right Chairman Crowley?

That question refers to the origin of the Kingston club based on chairman Dennis Crowley, a young tech wizard in New York City who owns a country house in nearby Stone Ridge, NY. When he first looked into launching a franchise in the National Premier Soccer League, he rightly saw a great market pretty much in his upstate backyard. He then created the club and cultivated a great gameday atmosphere that’s certainly missed.

Halfway through the second half of announcing the Kingston match, I got a text from a fellow taxi driver (the aforementioned co-worker) who knew about my penchant for the 65-1 Country House. “Country House wins Derby!” the text read. I thought he was pulling my leg and wasn’t able to verify this news until well after the Kingston match. Maximum Security had crossed the muddy finish line first but was disqualified and the second-place horse, Country House, was declared the winner. Longshot win! Great. No ticky, no shirty.

At least now its assured that sad betting failure shall never be repeated. Signing up for a TVG account took about 10 minutes and was technically a flawless experience. Almost any time of day, I can log on to my TVG account on either my Samsung phone or my desktop PC. An astounding amount of horse info is immediately at your fingertips. With a few dozen tracks running races to empty grandstands, there always seems to be a wagering opportunity within 15 minutes or so. It’s interesting to watch the masked handlers and hear the lonely track announcers and silent finishes. I’m gradually discovering that I’ve lost my golden touch enjoyed for much of the 1990s. I’ve had one payout in a dozen tries, a quarter horse called Groucho at Los Alamitos wonme $23.60.

I watched on my phone as I sat on my back deck staring at a tiki torch in the dark, which was kind of cool and certainly a new experience. The races are a reality dose that kindly interrupt endless desktop viewing of Lilyhammer on Netflix. Little Steven, however, would be disappointed with my wagering history so far. Aside from the Groucho win, everything else at Will Rogers Downs, Tampa Bay, Gulfstream, and Remington—they’ve all been Loserville. But that could change. I’ve still got downtime galore and some dough remaining in the account. And since the 146th running of the Kentucky Derby this year has been moved to September 5, you can bet that this country house will not be closed out.